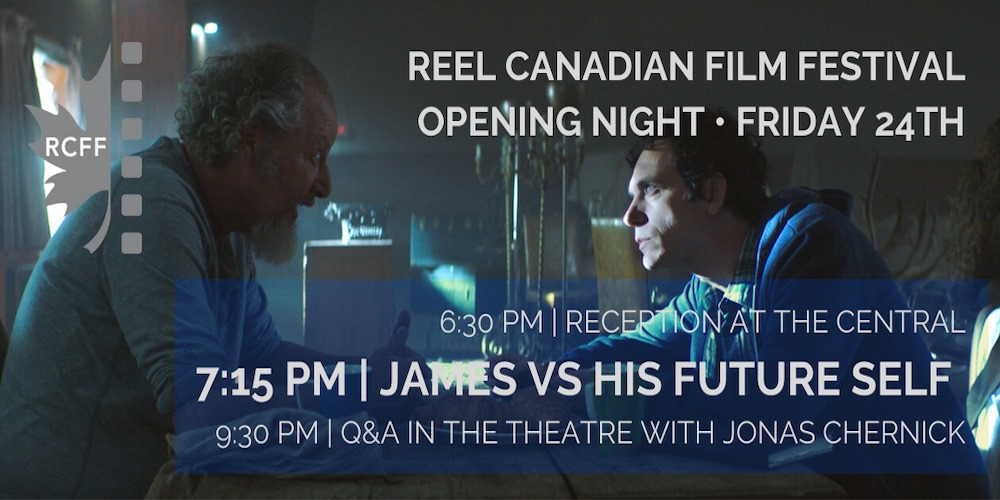 - Includes a complimentary drink and appetizers

7:15 pm: Short Film: TIPPED by ALYSSE LEITE-ROGERS, followed by: JAMES VS HIS FUTURE SELF

James, played by Chernick, is an obsessive scientist on the brink of discovering the key to time travel. Desperate to achieve his goals, he refuses to listen when a curmudgeonly older man called Jimmy — James himself, back from the future — confronts him and demands the gives up on his dream. Director Jeremy LaLonde interweaves the tension of a man battling his own ego with romance and comedy, never letting the science get in the way of a good story. The film includes star turns from Daniel Stern and Frances Conroy.

9:30 pm: Q&A in the theatre with JONAS CHERNICK

Jonas Chernick wrote the screenplay and co-produced James Vs His Future Self as well as featuring in the lead role. His signature endearing awkwardness has propelled him to the forefront of the Canadian film and TV industry, where he has over 60 roles to his name. He has also appeared in over a dozen theatre and holds several awards, including a 2008 Gemini.