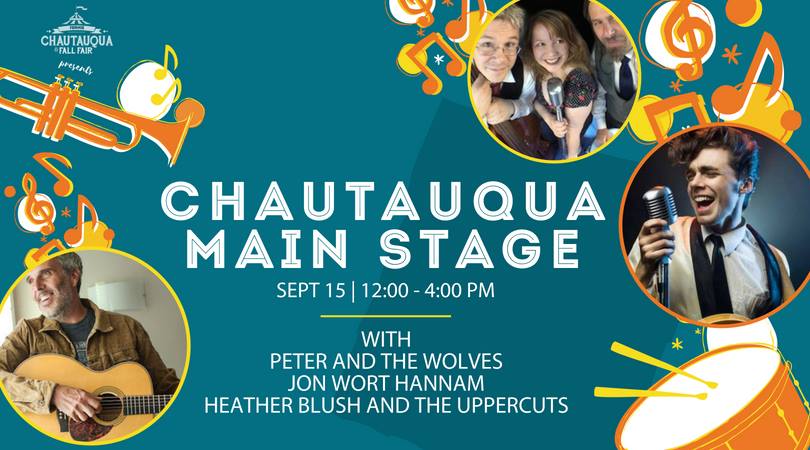 Join Peter and the Wolves, Jon Wort Hannam, and Heather Blush and the Uppercuts for an afternoon of some of rippin' rock, soul and sass. Sponsored by Teck. With MC Erin Teeple. The Chautauqua Grill and a variety of food trucks will be available throughout the day.

PETER AND THE WOLVES | 12:00 to 1:00 PM
Peter and the Wolves, a fresh-faced rockabilly outfit from Calgary, is shaped by their forefathers’ rowdy, unstoppable urge to shake it up. Led by Howlin’ Pete Cormier, the Wolves were playing the bar scene while half its members were still in high school. Pete flashed his guitar and lady-killer good looks, as Theo dug deep into his stand-up and Paul cranked out soul-scorching keyboard solos. Elvis, Eddy Cochrane and CCR were mixed in with House of the Rising Son and Rock Lobster. Sweat dripped from their brow and soaked their sharkskin suits; they pulverized the room and left them panting for more.

JON WORT HANNAM | 1:00 to 3:00 PM
Perhaps it’s the growing list of accolades, which these days include a Juno nomination, a Canadian Folk Music Award, a Galaxie Rising Star Award and a Kerrville New Folk title, or perhaps it’s the lofty comparisons reviewers have made to Tom Russell, W.O. Mitchell and Margaret Laurence. Whatever it is, Lethbridge, AB based, folk-­‐roots musician, John Wort Hannam is making music with a new-­‐found confidence these days. 15 years into his career and he is far and away writing his best material yet. John has released 6 recordings in 13 years with performance highlights that include a win at the Kerrville, Texas New Folk Song Competition, collaborating with the Calgary Philharmonic, composing the 50th Anniversary song for his alma mater, University of Lethbridge, composing the 2012 Alberta Winter Games official song and playing the 2012 Olympic Summer Games.

HEATHER BLUSH AND THE UPPERCUTS | 3:00 to 4:00 PM
Heather Blush and The Uppercuts is a trio of rogue troubadours based in Calgary, Alberta. Sassy, sultry, and just plain fun, this trio performs original songs designed to knock your socks off! With energetic, audience-engaging shows, Heather is quickly becoming known for songwriting that covers all bases between witty sarcasm and gutwrenching honesty. With “Captain” Steve Hazlett on drums and “Duellin’ Dale Ulan” on upright bass, this trio packs a punch and leaves a lasting impression.

Arts and CultureCommunityGeneral
Go Back