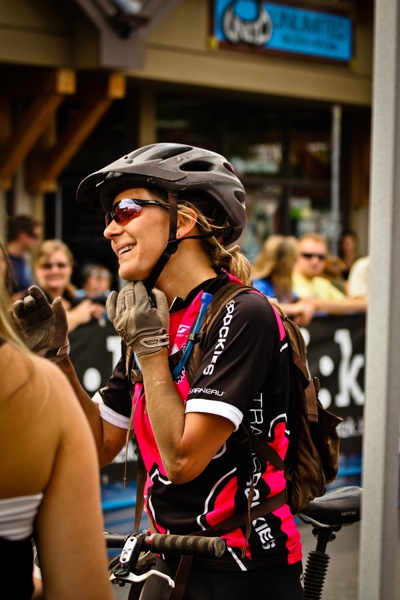 Two weeks ago, prior to my first race of the season, I was sitting in Paul Attalla's office reading Explore magazine. There was a feature on female cyclist Emily Batty, currently vying for one of the two spots available for Canada's Women's Cross Country Mountain Bike team (alongside Catherine Pendrel and Marie-Helene Premont). 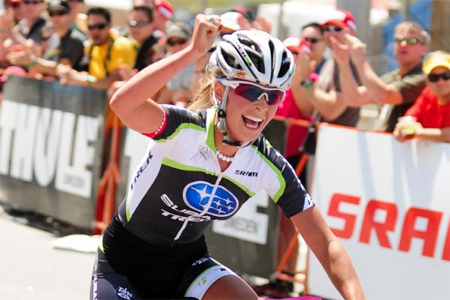 In the interview she said two things that resonated with me. First, in regards to the number of females in the sport of mountain biking:

"I think the ratio of female to male riders is proportioned to the amount of marketing each one receives. Have you picked up a bike magazine lately? I would say—just guessing here—it’s 90 per cent men and 10 per cent women. I bet if you calculated the ratio of participants in cycling it would be along those same percentages."

Secondly, in regards to racing in pearls and mascara:

"Well, that’s just who I am and always have been. Young and old, girls need to be reminded that it’s okay to be yourself and enjoy sport on every level. I have taken part in enough women’s clinics to have learned that most of us surprise ourselves with how much talent we actually have."

It made me very proud to have someone like Emily not only representing Canada, but also representing women in the sport. And I have to say, it reminds me a lot of another Emily I know - Emily Brydon has raced with hoop earrings, silver necklaces and rings, and now retired, she continues to be an advocate for women in sport by representing the women's Alpine Ski Team on the Alpine Canada board.

Last weekend at the Salty Dog Enduro, a friend was kind enough to lend me his drop seat. Wearing a white skirt and dressed for dinner, I asked my boyfriend if he could grab the bike from the back of the car. "Are you a princess or a biker?" my friend Don asked. I proudly responded, "Both!"

I like wearing skirts and dresses, curling my hair, and wearing makeup... I'm a woman, and I don't feel like I need to act or dress "masculine" to be taken seriously as a biker, or as a person in general.

Interestingly, there was an article posted on Pinkbike.com yesterday that created a lot of controversy. "Why No Y?" written by Mitchell Scott discussing the lack of women in the sport of mountain biking. 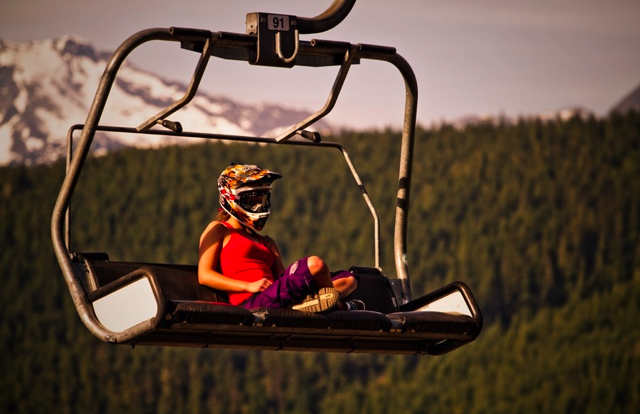 Why no Y? photo by Dave Mossop

His first point parallels Emily's, in that he believes the sport is commercially driven by "dudes".

"This is a dude sport. Companies are run by dudes. The big pro athlete contracts are signed by dudes. Bikes are primarily designed and built for dudes. Pretty much all of mountain biking’s imagery and marketing is dude-centric. It’s basically a dude-o-sphere populated by massive dudeness that can only, by virtue of its almighty dude, continue down the one-way road to dude-town."

He makes other points, some I agree with - others I don't. Basically his argument is that increasing the number of women who mountain bike will be better for the sport overall, concluding that "Outdoor sports that are killing it right now have an equal balance of men and women: climbing, skiing, snowboarding, kayaking." I agree that having more women, and people in general, involved in a sport can only help it, but I don't believe there is an equal balance in the other sports he mentions in the quote above, and definitely not in surfing, which he uses as a comparison earlier in the article.

These two articles made me think more about being a woman and being a mountain biker. Why was I so intimidated to try the sport to begin with? Why did I only feel comfortable biking with women for so long? How can we change the perception of female sports in general?

I for one am stoked that there are female advocates like Emily Batty and Emily Brydon out there - role models for the next generation, sharing their experiences, confidence and abilities and letting them know that women can "kill it" and still be feminine. And I hope, in the small part my friends and I play, we can inspire young girls in Fernie to get out there and try biking, without having to be "one of the boys".