It all started a few years ago on a Brodie Bruzza - a freeride mountain bike so obviously not suited for me but it was just the right price. I had recently moved back to Fernie after nearly eight pasty years between Uni and working in a cubicle under hideous fluorescent lights. It was time to get back into mountain life, and mountain biking seemed like the thing to do.

Under the wing of what I aptly named the "Biker Bitches" (attempt walking down a trail with these girls on your rear and you’ll understand why) I quickly became enthralled with the sport. Some used the word obsessed.

The Bruzza lasted two seasons, at the end of which I made the rash decision, not surprising after a long day of golf and cocktails at the Emily Brydon Golf Tournament, to compete in the Transrockies the following summer alongside good friend and "real" athlete Jenny Delich. Once again not surprisingly, it wasn't in the cards. A combination of training incorrectly, over commitment, overworking and most of all an injury plagued body took us out of the running…but not before Rocky Mountain decided to give us a deal on two pretty silver and pink bikes that weighed an impressive 27 pounds (see ya later 34 pound Bruzza!).

The bike remained pretty and shiny as I began a circular affair with rehab. I finally felt balanced and strong last summer, and took therapy onto the trails. At the end of the “season” (biking in November’s slush, ice and mud in -10 degree weather) it was clear that the bug to take biking further was still lurking behind the "just for fun" facade. But with winter on its way, the bug kept at bay. Until just recently that is.

The PPP was fast approaching and we wanted to put a team in "just for fun". The team managed to come together, and while we did have fun I treated that stretch of road between the ski hill and town like it was the last kilometers of the bloody Tour de France. And I loved every minute of it. 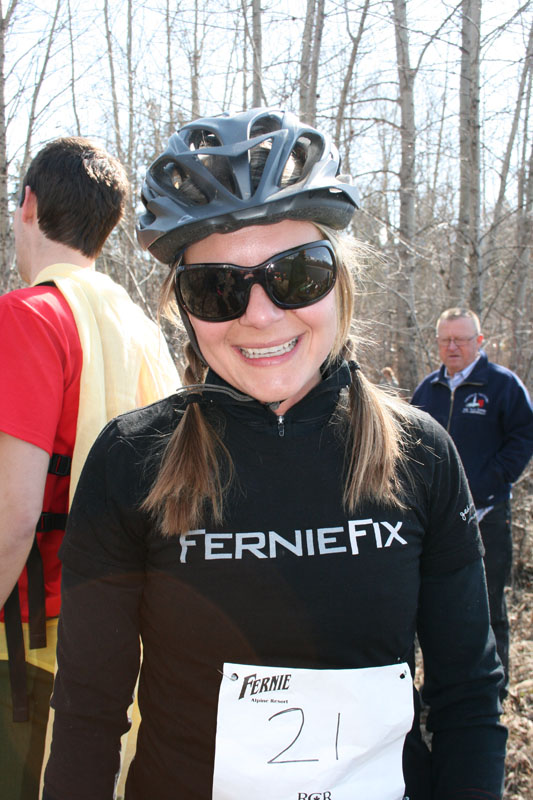 The weeks prior to the PPP I had been toying with the idea of entering the TR3 – a new solo opportunity over the first three days of the Transrockies. Pat Gilmar sets the course each year and my ears perked when he described the routes he was contemplating for day one and two in Fernie and three in Elkford. I should do it, I thought. Just for fun. Since it didn’t sell out last year I decided I would enter last minute depending on how I felt and what the weather was doing. Not so much. I went online and saw “80% sold out!” and my fate was decided.

So here I am, a mere four months away from three days of biking my rear off, literally, and wondering if my “just for fun” facade will stick. It has me thinking about so many people in Fernie with dual lives, and how they have formed a network of support and encouragement. Take for example Mike Rumpel. He works full time as a chiropractor, has a wife and three daughters, is renovating his house, and plans on competing in two 24-hour bike races this year. On top of that he is a positive force pushing athletes of all levels to go for it. And he’s just one example of many!

What is it about Fernie and its community of in-the-closet athletes? I’m still musing, but hopefully by fall will have an answer. We’ve started a new column in an attempt to understand this interesting breed of individuals, following them as they work towards their goals over the summer months. Until then, I can be found biking up Dem Bones and any other trail that’s dry…just for fun of course!