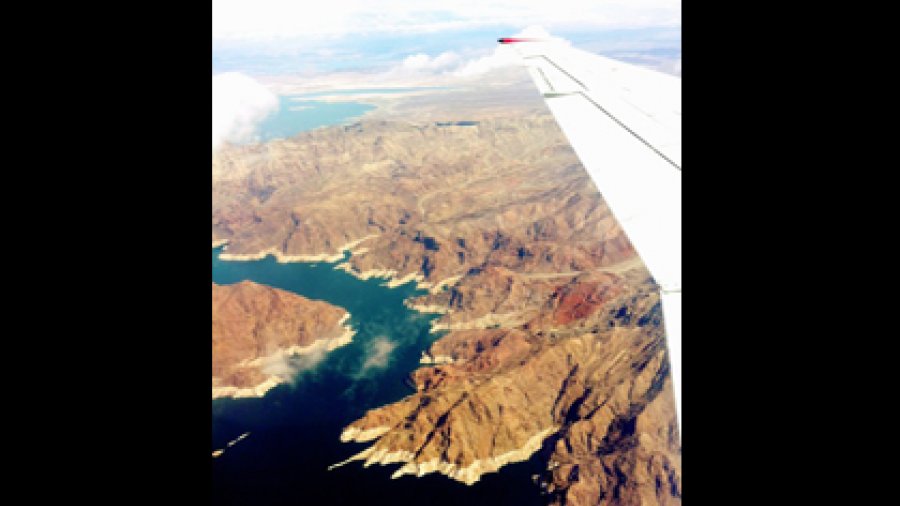 I love fall. But after being rained out of my plans to jump on a motorbike—where I imagined the breeze running through my hair—fall has disappointed me.

And so, I’m going to Vegas.

My friend Lindsey and I are on a flight from Kalispell to Sin City. Because as much as everyone who lives in Fernie likes to think they never need an escape, sometimes we just do.

Our flight lands mid-afternoon and it’s as though I’ve entered this alternate world of fluorescent lights, the sounds of slot machines echoing everywhere.

We head to the Flamingo, one of Vegas’ original hotels, and then get ready for our first night out.

After purchasing $10 margaritas and having a bite to eat we make our way to the infamous Las Vegas strip, lined with elaborate hotels and palm trees. We dodge around fellow strip-goers and find ourselves, a few hours later, at a bar called Gilley’s.

Known for its Sunday night bikini bull riding, we settle ourselves at the bar. However, there are no bar stools to sit on. Instead we have to saddle up on the rows of western saddles that replace the bar stools.

As time rolls by the bar gets busier, the dance floor fills and country music resonates. It’s not long before the first of many women not-so-elegantly strips and graces us with her bikini presence. She hops onto the mechanical bull, centred in the middle of the bar.

Men cheer and the bull bucks this woman violently to the ground within a few seconds. She stumbles to her feet and then the next woman enters.

The evening ahead is filled with surprise, and I’ve received a rude awakening to Las Vegas, and bikini bull riding.

The following day, still trying to cast the images of the previous night from my head, we head to the Flamingo pool.

I’m looking forward to the afternoon’s pool party. Apparently, so is everyone else. The pool is filled with all sorts of sizes and shapes, and all are there to have a good time.

After dipping in and out of the pool I notice a rather large man across the way dancing on the pool deck. A Justin Bieber song blasts from the stereo and he shakes his moneymaker, his swim trunks lying halfway down his buttocks.

People cheer and mimic his dance moves from the pool and when security decides he’s crossed the line of appropriateness they escort him away, but not before receiving boos from fellow pool-goers.

Later we find ourselves at one of the city’s most elaborate nightclubs, Marquee. There are great DJs, dancing and confetti. I wear wedge heels and hobble back to our hotel barefoot and black-soled, but when it comes to fashion it’s always worth the sacrifice, right?

The next evening we head to Zumanity—the sensual side of the esteemed Cirque du Soleil in New York, New York. If I were a performance critic I would have a difficult time explaining just how fabulous it was.

The dancers do things that seem humanly impossible. The show itself was intimate and beautiful.

If you ever go to Vegas, go to Cirque.

On our way back we head to the Paris casino to gamble. Having no experience in this game of chance I put a $20 bill into a slot machine. I lose it within ten minutes and realize I could have bought two margaritas with that $20. Dang.

On our last day in Vegas we do a bit of shopping and go out for one last night on the town. We don’t make it back to our hotel until 5am and have to be at the airport in two hours.

We sluggishly make our way through the airport, check our bags and board the plane. Knowing I look like I’ve just collided with a truck, I curl up into my seat and fall asleep.

The sun shines as we drive back into Fernie a few hours later. People fish and float on the river, mountain bikers make their way through town. It’s quiet. Ahh, yes. I remember now.

Las Vegas is great. But it sure is nice to be home.

If you need an escape to Las Vegas, check out Allegiant Air in Kalispell, MT.