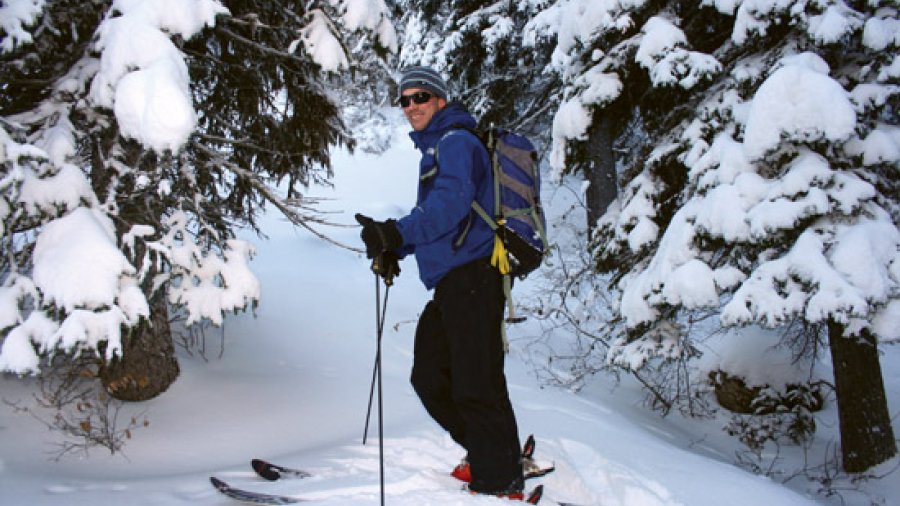 It was a clear powder day mid season in 1993. We had taken the Face Lift and saw a boot pack leading to a nice pocket of snow below the rocks of Lizard Bowl, took off our skis and started the quick ascent. Just 13 at the time, consequences were never considered mostly because we didn’t realize what they were. Hiking the saddle into Curry Bowl, it was the same thought process. “Wow, someone put in a boot pack, let’s drop in too!” Transceivers? Nope. Shovels? They’re too heavy! Probes? What are those? Knowledge of the terrain? Not a clue.

Fast forward a few years and we’re dropping into Fish Bowl, and other areas I’m embarrassed to admit. This time we have transceivers, but that’s it. What’s the point of that?

Three years ago I decided to learn more before seriously getting into backcountry skiing. A slight obsession with mountain biking pointed me in this direction. The technical climbs, rewarding descent - seemed right up my alley. Unfortunately the last two seasons were marked with unstable terrain and explorations came to a quick halt. Fortunately this instability and multiple avalanche tragedies made everyone realize the importance of knowledge and safety when embarking on backcountry skiing, snowboarding, or sledding.

Avalanche Skills Training Level 1, also known as Avi 1, is offered at a variety of sources in Fernie - the College of the Rockies being one of these. Typically this course runs for two and half days as an introduction to skiing or snowboarding in the backcountry by combining theory and practical session to teach basic safety and knowledge, set out by the Canadian Avalanche Centre. Nick Morris, an ACMG guide and a long time Fernie local, recently started Snow Valley Guiding to offer guided ski touring, avalanche skills training, backcountry trips, and custom trips for individuals and groups. He offered me a one-on-one Avi 1 course and I was excited to get it under my belt to help me feel more confident while exploring this new sport.

The day started at Nick’s house, where we went through our gear, an Avaluator and an Avi 1 textbook. We also used the Canadian Avalanche Centre website to go through the online Trip Planner process. This was very helpful and made a lot of sense, even to someone like me with minimal knowledge and experience. This site breaks down areas into three groups: Alpine, Treeline, and Below Treeline, with ratings ranging from Low to Extreme hazards and terrain described as simple, challenging and complex. You choose a region from the Bulletin Region, and it shows the hazard ratings in each terrain type for the next three days. From there you use an Avaluator to understand what caution to use when entering specific areas.

Low to moderate caution was suggested for the region of the South Kootenays we were heading to. We quipped ourselves with coffees and snacks, and drove the quick 30 minutes to our secret stash. While it had snowed 5cm in town, it snowed more than 20cm in this area, making it an easy choice over the “slackcountry” available off the hill. We parked right where we were to begin skinning, and as it was cold sped through setting up our gear to begin the ascent. Throughout the climb Nick pointed out features we had discussed this morning, continually ensuring I was aware of my surroundings and taking notice to what was happening. I am a visual learner so being able to apply and see first hand what we had covered that morning helped it to sink in.

We stopped along the way to discuss choices and routes, to take notice of snow pack and different snow formations, and for snacks (homemade cookies made by Nick’s daugheter Hanna) and hot chocolate. I had to be on my toes because Nick continually quizzed me, asking which slope we were skiing, which direction the wind was coming from, where the start zones were located, whether we were in a track or runout, and so on until we finally arrived at the top. I realized through the process that I am terrible with mountaineering, not a good thing when you need to make decisions based upon which direction slopes are facing.

From the top the run down looked amazing, and while I wanted to fly down the untouched, powder laden slope, all that I had learned had me patiently awaiting Nick’s next move. He explained where we were going to ski and the process – he would ski a line, stop and then I could ski to the left or right of his line down to where he was. We continued this way until we reached the bottom. I realized then that this was definitely something I could add to my list of obsessions.

As conditions were stable and weather was forecasted to stay the same for some time, Nick decided it would be best for me to take the second part of the course when there were other features and elements thrown into the mix. Until then I have my manual, the Avaluator, the tools and reports at www.avalanche.ca, and just enough knowledge to be completely freaked out! While I’m looking forward to continuing this journey in a safe and pragmatic way, for now I’ll keep it to the slackcountry. The whimsical decisions of youth are long gone with this new perspective of the powerful backcountry - all too real to ignore.