On Tour with Shred Kelly 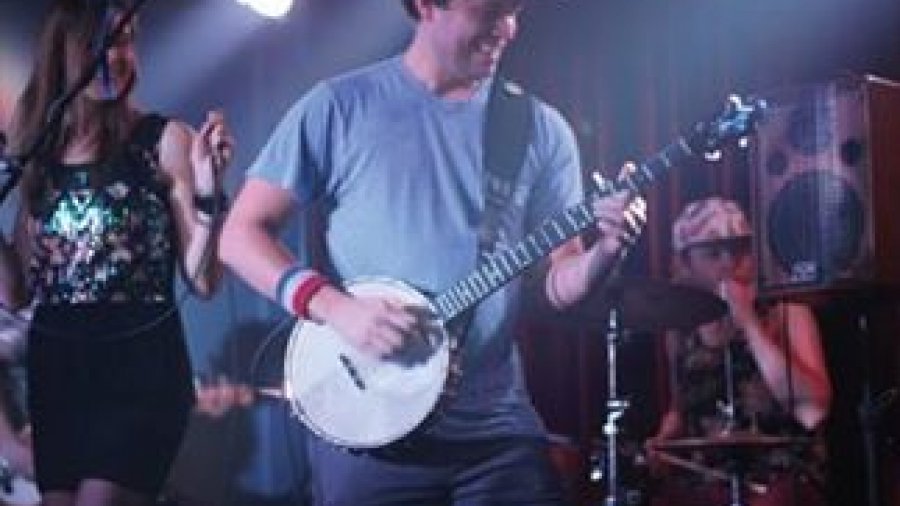 “I hate work! I HATE WORK!” Everyone in the bar is yelling it, jumping up and down. It’s sweaty, it’s loud and my cheeks hurt from smiling all night.

I’m on tour with Shred Kelly, Fernie’s amazing stoke folk band, rocking the tambourine and feeling like a million bucks.

Since moving back to town, I’ve become a big Shred Kelly fan. I have both their albums. I wear the green Shred Kelly toque all over town. Whenever they have a show I’m on the dance floor stomping my feet. There’s no shame in saying that maybe, just maybe, I’m a little obsessed.

So when band member Sage McBride asked me to join them for a weekend tour I didn’t hesitate a second.

We head out Friday afternoon to Rossland where the band has been invited to play in their annual Winter Carnival. They pick me up in the van, stocked full of instruments, and head out on the road.

When we arrive—after hours of banter, Game of Thrones discussion and a mass consumption of kettle corn—we set up, do sound check (Ah! Sound check!), and then head across the street for some pizza.

I’m told that I’m to shake the tambourine for two songs on stage tonight.

The last time I was on a stage was for a high school play. I was dressed as a giant candy cane and forgot my lines. I only had two. Still, I’d like to think I’ve got great rhythm and being a big fan of Shred Kelly will prove an advantage. If I mess up, I can just yell and bounce.

The show begins and Sage beckons me on stage. When the drums, bass, banjo, keyboard and guitar come together all of my nerves disappear. A few shots of Fireball have helped, too.

I shake the tambourine and I’m smiling so hard my cheeks hurt. Being on stage with the band members; Sage, Tim, Ty, Jordan and Ian (Shiner), I feel like I belong. I’m not one to get sentimental—who am I kidding, I always get sentimental—but being a part of Shred Kelly is a pretty fantastic thing.

After the show we pack up, hotel-bound and the next morning we’re off to Fernie for Saturday’s show at the Northern Bar & Stage. I can’t wait to shake the tambourine. It’s kind of addicting.

Jordan tells me that at tonight’s show I will be crowd surfing with my tambourine. Sure.

I arrive just before 11 p.m. to a line up that stretches down the sidewalk. I grab a beer and enjoy the opening act, local band Ham Salad, before Shred Kelly takes the stage.

The familiar faces in the crowd are endless and just like any Fernie show there are plenty of friends to dance with.

When my time comes Jordan pulls me up on stage and I, the tambourine lady, begin shakin’ my thang. I’m kidding. But I am slamming the tambourine so hard against my palm that my hand starts to bruise and I don’t even care. And with every motion of the tambourine in the air the crowd gets a little more stoked.

When the next song, Leaving Town, begins Sage yells into the microphone, “Okay guys, Jesse is going to crowd surf! Don’t drop her!”

I lean back, tambourine in hand, and let the crowd catch me.

Seriously, I can’t stop smiling. There are hands everywhere and I’m crowd surfing at the Northern.

Songs come and go until we near the end of the night. An encore is requested and they play a favourite, I Hate Work. Because, at one time or another, we’ve all hated work. And there’s nothing quite like yelling it out at the top of your lungs with other people who have hated work too.

For Shred Kelly, who began here in Fernie and have now played the Ottawa Folk Fest, Wapiti Musical Festival and toured the country, playing at home strikes an emotion.

This is where it all began. But tonight, I don’t think they hate work. To be honest, neither do I.

Even so, I’m still going to yell it out as loud as I can.