Strategies for Sport and Survival 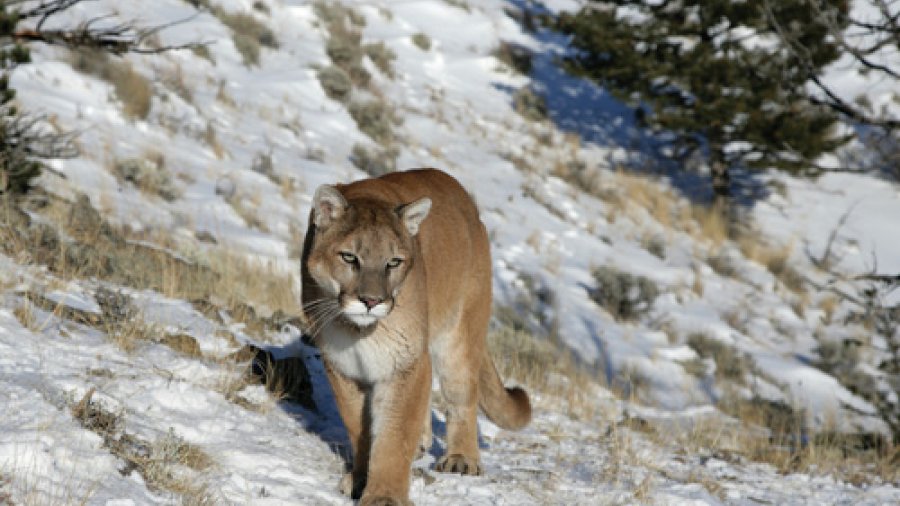 Canadian athletes train years, weeks, months, days and hours to achieve the Olympic motto of “Citius, Altius, Fortius”. Wildlife in the Canadian Rockies has evolved over millennium to simply survive winter. Which animals have the swiftest, highest and strongest adaptation strategies?

Undoubtedly the swiftest winter predator is Felis concolor, the cougar or mountain lion. Large paws and powerful hind legs give this wildcat great agility and speed in the winter to hunt its favourite prey mule deer, elk and moose. Using highly developed muscles a cougar can leap horizontally from standing 6-12 m or 20-40 feet, and vertically 5.4 m or 18 feet. In short powerful sprints a cougar can run 55-72 km/hr. Compared to the world ski jumping record of 239 m, the cougar leap falls short of its human competition but then again sliding, momentum and speed are not a factor. From a standing start, how high and far can you jump?

Snowshoeing along the Elk River, I saw a natural slide down an embankment. Who needs a ski jump, clearly not the Northern river otter. Tobogganing head first, front legs tucked tightly against its side and feet pointed behind, this streamlined mustelid, dives into the Elk River hunting for fish. Biologist observing otters have questioned whether sliding is simply an efficient travel movement or is it a playful display. Who is to say otters like athletes don’t just want to have fun!

Biology in the Rocky Mountains is influenced by elevation. Species that survive winter up high deserve special ‘wild medals’. Wandering all winter in the alpine and subalpine forest, the gold medal for Altius is awarded to the white-tailed ptarmigan. To avoid detection its feathers molt to pure white in winter and extra feathers cover a ptarmigan’s feet to maintain body heat and to act as a snowshoe. It has an unusually large crop, like a built-in storage bin for food to help them survive periods when the pickings are slim. To keep warm at night and to avoid predators, ptarmigans burrow into the snow taking advantage of its thermal cover.

Silver medal in this division up in the alpine goes to the Clark’s nutcracker, a hardy, raucous, gregarious bird. Found amongst the wind desiccated whitebark pine trees, this tawny gray member of the jay family with black wings, has a long, chisel-like bill that can mistaken it for a woodpecker. Its bill is used to crack conifer cones, collecting seeds, which it stores in winter caches of 30,000 – 100,000 seeds, under 2-3 cm of soil. This birdbrain remembers where most of the food is hidden and what is forgotten, germinates and results in seedling dispersal.

Lastly are two Fortius or strong species, able to withstand the harsh winter season through the strategy of avoidance; simply sleeping the winter away. Gold medal for the animal that sleeps the most through the Rocky Mountain winter goes to the Columbia ground squirrel. Awake for about 130 days a year, sleeping for the remainder 235 days, 2/3 of the year, this ground squirrel has a lot of work to do in the summer. To make hay while the sun shines the ground squirrel has to consume 12% of its body weight to gain enough fat to survive the long winter nap.

Another strong contender of a Fortius nature is the female grizzly bears. What female gains up to 180 kgs or 400 lbs in a summer season and celebrates? Most of this weight is gained eating plants since 80-90% of their dietary requirement is vegetation. Gaining roughly 3 lbs a day, females wait until the late fall to implant the fertilized eggs from mating in June. If the animal achieves healthy weight gain, the fetus is implanted into the uterine wall and in January 1-4 cubs the size of a pound of butter are born. In May when they exit the den they are 20 lbs of fat and fluff.

Winter is a difficult season. Citius, Atius, Fortius are not only mottos for Olympic athletes; they are essential for wildlife surviving the harshest of seasons in the Canadian Rockies.