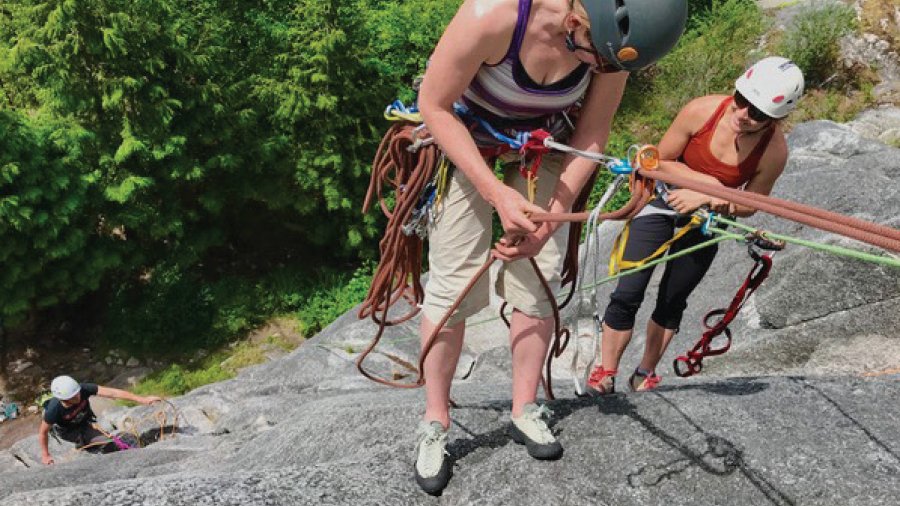 Accidents in North American Climbing 2017 states that the five most common climbing accidents that require rescue are the result of leader falls, loose rock, rappelling, becoming stranded or benighted, and scrambling, downclimbing, or soloing. With proper training from certified instructors and guides, you can reduce the likelihood of accidents while climbing. Knowledge of the climbing lingo as well as understanding common mistakes and how to avoid making them can lead to a life of climbing without ever having to make a rescue call.

Listening to music while participating in sports can make the outing more enjoyable, however, when you’re rock climbing, leave the speakers in the car. Numerous accidents are reported in North America every year that arose from communication difficulties between climbing partners. Standard climbing language in Canada consists of a few short commands, all of which vary phonetically in order to make each command stand out from the next.

On belay - signifies that the belayer has checked their system and is ready for their partner to begin climbing.

Climbing - indicates that the climber is making upward progress, and the belayer needs to pull in slack.

Take - with this command, the belayer will pull in all of the slack in the climbing system to keep the climber taught on the rope.

Slack - you guessed it, the climber needs some slack in the climbing system.

Secure - this important command should only be communicated when the climber has clipped securely into an anchor and wants the belayer to unclip them from the initial climbing system. If the plan is to be lowered after cleaning an anchor, you should never say “secure” but rather ask for “slack” and then “take.”

I personally know someone who was dropped 30 meters when the belayer thought that the climber was going to rappel from a cliff, and the climber was expecting to be lowered by the belayer. Luckily he survived, although was seriously injured. Unfortunately, this miscommunication in climbing happens far too often and is the catalyst for climbing fatalities annually.

Rappelling, also known as abseiling, is when a person “belays” themselves from the top of a cliff, down to the bottom. Before attempting this activity on your own, you should seek out instruction from a certified guide or instructor. Failure to rig the system correctly will have catastrophic consequences. Every year a few climbers in North America lose their lives when rappelling goes wrong. Reasons for this include not properly threading the rope through both the rappel device and carabiner, as well as rappelling off of the end of the ropes. The latter can be avoided by tying a tight barrel knot in the ends of both ropes.

Leader fall accidents usually are a result of poorly placed protection while trad climbing. Understanding the mechanics of your protection is vital. Knowing the limitations of rock climbing protection is as important as comprehending how it works. Accidents in North American Climbing 2017 identifies “sticky cams” as a cause of failure, as well as overconfidence in the holding strength of micro protection.

Managing the hazardous climbing environment, and knowing how to navigate the vertical world, are all skills covered in climbing courses. Climbing courses are not just for beginners. There are advanced courses available for those whose knowledge and technical skill takes them to higher and more hazardous places. Resources such as Accidents in North American Climbing are also useful, however, reading and watching videos come second to getting out with experienced climbers.

A safe day out on the rock ensures that you can listen to your favourite tunes with your friends in the car on your way home. Feel free to email me at mel@mountainaddicts.ca with any questions regarding climbing or hiring a guide.