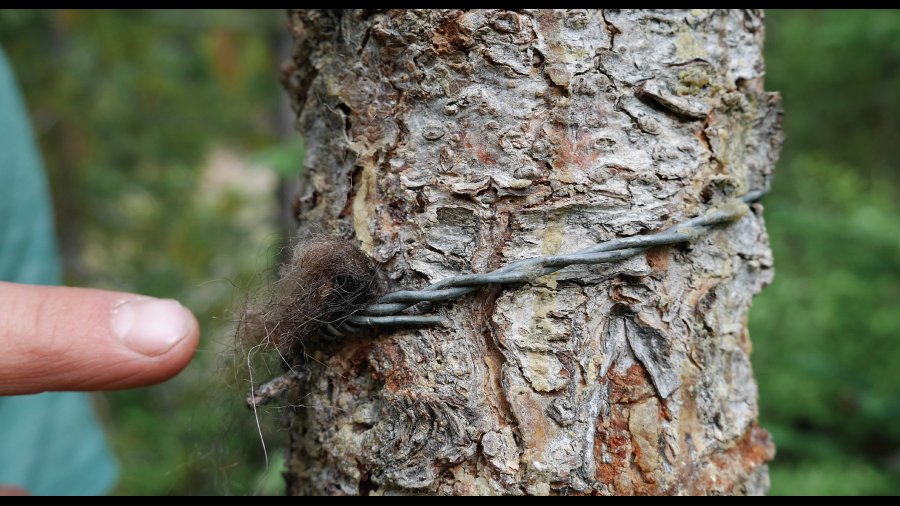 The first time I ever hiked Three Sisters (11 years ago) I carried a soup pot and metal spoon, banged on it for eight hours, nearly lost my then-budding relationship with Ben, and discovered just how annoying I could be.

I've learned a thing or two since then. For instance, talking loudly generates enough noise to keep bears away. I've learned to make a bear-hang and loop my food in a tree. I have also learned to respect bear country – sometimes the best decision is to pack up and leave. But there is so much I don't know.

And so, on a hot day at the end of June, I join Emma Van Tussenbroek, a wildlife technician for the South Rockies Grizzly Bear Project (SRGBP), in learning about bears.

The project began in 2006 and is run by scientists from BC Ministry of Forests, Lands and Natural Resources Operations, volunteers, and other professionals. They capture and radio-collar bears, collect hair for DNA, and document population trends of grizzlies in the Southeastern region of BC. The intent is to better protect the animals, and educate the public.

We meet early on a Thursday and drive to the Connor Lakes trailhead, just north of Elkford, our intention being to collect fur samples from rub trees – there are approximately 60 rub tree trails in the Elk Valley and Flathead, and almost 300 rub trees – all the way to the lake. It is a cool morning, a perfect day to be in the woods.

After fording a small river with our bikes, we make our way up an old logging road and to the first rub tree – a tree, big or small, wrapped in barbed wire and used to collect fur samples. Bears use them to leave their scent, mark territory, or just to scratch their backs.

Emma carries an iPad with the rub tree locations, and together we gather three separate hair samples from the giant larch, put them in envelopes, and label them. The sample information is then added into the iPad, and later sent to Nelson for DNA analysis.

We then take a blowtorch and burn off all remaining hair samples from the tree in preparation for the next bear who decides to come along and scratch his back.

I notice giant indentations in the dirt leading up to the tree. Emma explains that bears know which trees they like, and create pathways that lead directly to them, orchestrating their routes meticulously.

“Bears are so cool,” I say. Sure, to 18-year-old me they instilled a fear so powerful I insisted on carrying a soup pot, but today I recognize their profound spectacularity.

We continue up the road to the next rub tree, which has grown significantly and seems to be suffocated by the barbed wire. Emma unpacks some tools from her bag and, after collecting more hair, we loosen the wire and re-wrap the tree.

We eventually reach a washout where, leaving our bikes behind, we hike up the mountain and towards Connor Lakes.

“It's good for people to be involved in a community project like this, especially when it has to do with conservation,” she says about SRGBP. “It helps keeps things sustainable.”

Indeed, by the time we reach the lake we have taken samples from eight rub trees, encountered plentiful bear scat, and even found a few fossils. Always it seems, coming back to the woods realigns my excitement for adventure.

We eat lunch, and on our way down wrap a new rub tree with barbed wire. I wish I could come back in a month and check it.

“I love poo and prints,” Emma says, to no one in particular while ahead on the trail. Though I make fun of her for this remark, I get it. There is a lot to be learned from scat and paw prints, from spending a day in the forest. Soon after, we head for home.

A few weeks later, while hiking to Bisaro Cave, I notice a rub tree with a good, clean hair sample attached to it – I smile, I would never have spotted this before.

I also smile because, unlike 11 years ago, I do not walk with a soup pot and metal spoon. I just walk.