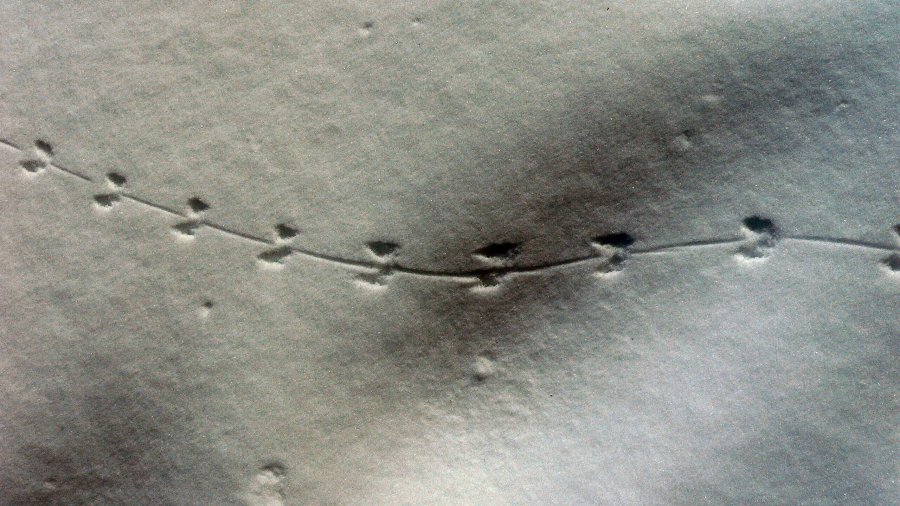 Winters first snow reads like a book you don’t want to put down: drama, unique characters, mystery, and one-of-a-kind illustrations mapping out a compelling plot.

In summer animals are concealed by a thick drape of plant foliage. As the sun falls toward the horizon, leaves drop, and a white canvas stretches over the landscape revealing animal behaviour. Winter is the season to read stories in the snow.

While cross-country skiing on the Fernie Golf Course last winter I tracked a snowshoe hare. Front feet planted one in front of the other with large fury ovals just ahead placed side-by-side indicated direction of travel. Hopping from shrub to shrub browsing on red-osier dogwood and black hawthorn, plants were recycled into piles of grey-green, slightly wrinkled round pellet. Surprisingly due to the inefficiency of their digestive system, hares first defecate a soft jelly-like pellet, turn around, and eat it again, reusing the hard-to-come-by nutrients one more time. Suddenly the track turned, risking the open area across the flat ‘green’. Midway across, it ended, replaced by a perfect wing imprint. Satisfied great-horned owl? Nature’s dramatic dance of eating and being eaten continues.

While snowshoeing the other day I noticed a similar track but instead the two smaller front tracks were side-by-side, slightly behind the larger opposite hind feet. Hopping from conifer to conifer, a red squirrel caused it to rain spruce cones. At the tree base, the squirrel had feasted discarding spruce cone shafts and broken scales in a large midden or heap of organic waste. Beside the midden was a large hole into an underground tunnel. Storage for extra cones and a safe escape – how cleaver!

Everywhere over the white canvas, were imprints of different shapes, sizes and patterns. In some tracks the front foot comes down with the hind right beside it. In deep fluffy snow a porcupine trail drags leaving lines made by the quills. Scurry patterns of mice with a trail dragline move in an erratic pattern across the snow. Wildcat prints show four toes in a round pattern. Not able to retract claws, canine tracks have a triangular shape at the top of the track. Large oval shapes in the snow show bedding down sites for moose and elk. The other day I followed a path that looked like it was a person shuffling, dragging their feet through the snow. Under a conifer the toes and heel pad came into focus, marked with definite claws. I hollered, “yo bear” and took a different route.

Winter is a season of mystery. Where do all the animals go? To survive winters harsh reality, animals have various coping strategies. Some have fled the scene all together. Others will sleep through it. A few rodents will spend periods in a quiet state conserving energy coming out only when conditions seem favourable. On a particularly cold winter day last winter I noticed a hole surface near a shrub. Small tracks scurried to another hole and then disappeared.

Rodents move in tunnels under the snow, surfacing in search for seeds. It is a risk to surface from the safe subnivean, trapping Earth’s radiant heat. A meadow vole, with it’s racing metabolism made a mistake and paid the ultimate price - frozen to death, overcome from hypothermia.

Food supply is essential to surviving winter. Two-toed tracks and accompanying scat resembling ‘glosette raisins’ or ‘chocolate covered almonds’ made by ungulates or hoofed animals, are found in large quantities in the valley bottoms. At the Big Ranch north of Sparwood or out in the Rocky Mountain Trench, ungulates find just enough grazing and browsing to sustain their massive size. Winter will be harsh though. Soon evidence of wolves, cougars, and packs of coyotes will leave behind carcasses of the weak and sick members.

Get out this winter and look for tracks, scat, hair, holes, bones, rubbings on trees, claw marks on tree trunks, grazing, browsing, wing prints, middens, food scraps - all illustrations left behind by animals for us to interpret. Winter clues captivate our imagination as we read the illustrated stories in the snow.