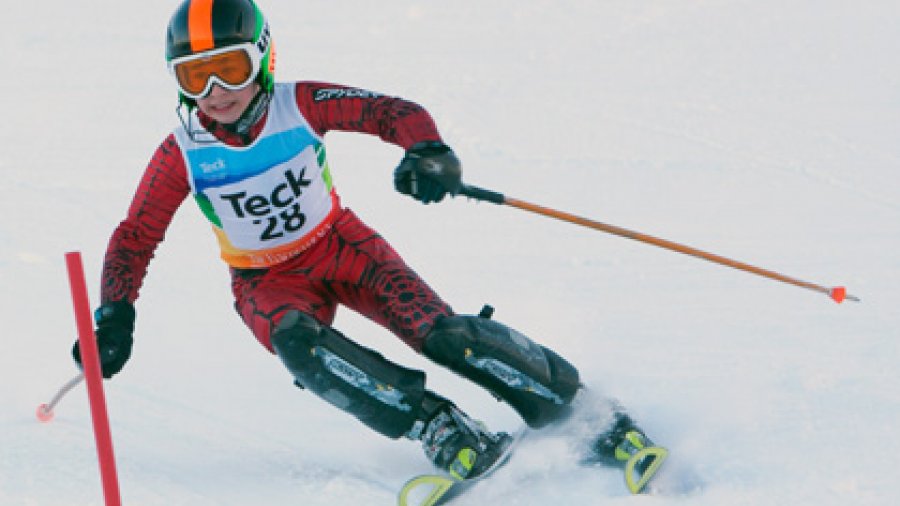 Simon Bernard’s parents Elise and Gio moved from the Eastern Townships in Quebec to Fernie for skiing in 1988. Not long after Simon and his older brother were born, beginning their ski careers at the typical Fernie age of two years old (and probably before that in a backpack). “It is just the winter sport you do in Fernie. You don’t get that everything. My parents came here for skiing and I’m following in their footsteps,” Simon says.

At four years old Simon began the racing program with FAST – the Fernie Alpine Ski Team. Now at 13, he’s in his second year in K1, recently won the Western Canadian Championships at Silver Star, and is about to compete at provincials on Vancouver Island at Mt. Washington followed by the Whistler Cup, which he has already qualified for but still hopes to race his way to a top spot at Mt. Washington so he makes Team Canada. Not surprising as it’s a prestigious title and pays his way in Whistler.

Simon has done well in FAST, and enjoys it as, “With each level there is more and more competition.” Prior to K1, Simon regarded ski racing as more of a hobby that kept him pretty busy. But upon entering K1, the sport opened up to him and he, “got his head more into it,” he admits. It can be demanding, especially this time of the year when races are more regular and many far from town. A student at Fernie Secondary School, Simon feels grateful for the support he’s received from his teachers. So do his parents.

“The teachers at school are pretty understanding. Roxane Esch really encouraged him and didn’t mind giving him his homework ahead of time. The school is really on board, and it’s nice and helpful,” says Simon’s mom.

Simon has a couple of days a week where he can attend school and catch up on homework, then it’s back on the road. He plans on taking ski racing year by year, with the ultimate goal of getting into the FIS program to see where it takes him. “And my older brother is in his first year of FIS. That’s kind of why I want to go in FIS too, I’ve always done what he wants to do,” Simon adds.

When I asked if it’s ever hard on powder days, it’s a pretty quick, “Nope. I’d rather be doing laps on the course. But there’s a line with gates - you can’t do them if there’s too much snow,” it’s obvious Simon’s passion is speed and not powder… yet!

Simon dabbles in other sports, such as the high school’s volleyball team in the fall (as it finishes before the ski racing season) along with mountain biking in the summer. But you can see it in his eyes – he’d rather be skiing! All the best of luck Simon, we look fowrard to watching your career unfold.

1. What is it about competing you love? The positive vibe that you get in the coaches, parents, kids... all of the encouragement. You meet all these people - there is such a culture behind racing and you look forward to seeing the kids you have met.

2. How do you prepare/train for your events? I try to get as much training as I can a few weeks in advance, especially with the larger radius course, as I’m not as good at that and would like to improve. Then I take a couple of days off to let the information seep in and digest... it’s not good to push the envelope too much before a race.

3. What are the events you are competing in this winter? GS, Slalom and Combined. I have done the Westerns and am going to the Provincials and Whistler Cup this spring.

4. What are your main goals when competing? I have certain expectations of myself. It depends if I do well, but still don’t have a good ranking or do badly and don’t have a good ranking. If I feel like I skied well, but didn’t get a good placing or people manage to sneak by me, I don’t hate myself too much. Goals also depend on the level of competition. In an international race, my goals would be different than a zone race.

5. How do you think Fernie's recreational side has changed since you've lived here? You see people sometimes getting tired of ski racing, and they find things that they enjoy more. I think it’s important to always find ways to keep it fun so you look forward to it each year. People my age seem to be moving toward free style/free skiing more and more. Some people learn better on their own and others learn from other people. Seems like a growing sport.