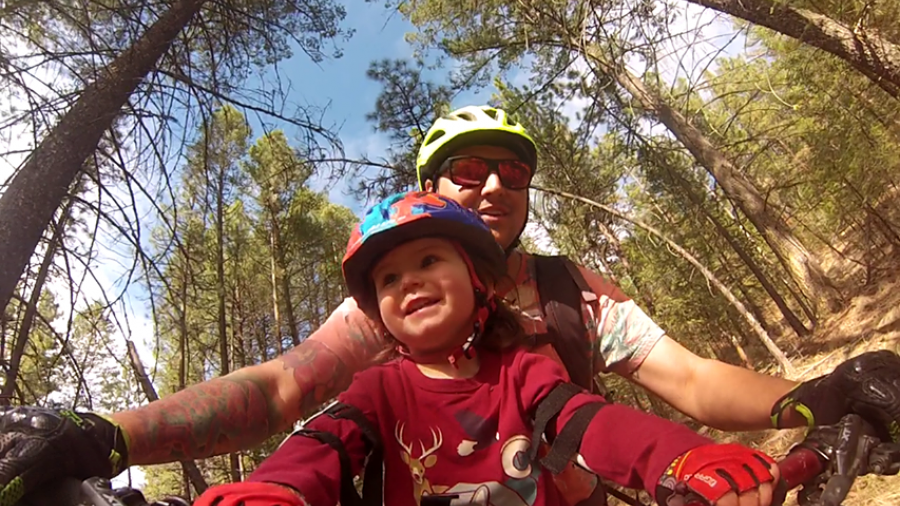 First they roll over, camera-ready, each small change a delight of awe to a new parent. A thousand photos later and you’ve lost friends on Facebook but to you it is still magic. Then they start to scooch or crawl, eventually stand, then walk and in Fernie, they begin to climb, ski and bike. A natural progression. A marvel to witness. Infants and toddlers shift and change without resistance and without fear.

These little beings can teach us so much when we take the time to see them.

In light of Father’s Day this month, I thought that I would interview a father who understands and embodies these principles perfectly. Victor Spicer is a Fernie parent who follows his son’s intuition and drive towards adventure: “The instinct children have to explore is amazing.” Spicer is impressed by how simple tasks such as following a bug along its path, picking up sticks, or throwing rocks can be so satisfying to his son, Silas. Being outdoors “is a release of pure endorphins aiding with their learning and growth” all at the same time. Since Silas was born, both Mom and Dad have made it a priority to spend a lot of time with him outdoors. Spicer feels that by starting young he can facilitate a “connection between fun and the outdoors early” for his child. Spicer is not the only parent concerned that with more and more exposure to screens in our modern world, children may lose their own sense of wonder and connection to nature. As Richard Louv, author of Last Child in the Woods states, “Time in nature is not leisure time; it’s an essential investment in our children’s health.” Spicer also believes it is vital that children’s attention be driven outdoors. “Being outside also tires them out so they have better sleep; it is a win-win” for all.

One of the Spicer family’s favourite spring activities is to go biking along Fernie’s many family-friendly trails. A few beginner trails for children are the Kootenay Elk Trail, the Great Northern Trail and the Coal Creek Heritage Trail. The scenery alone is a great backdrop for a photo opportunity. The day could end with muddy hands and grass stained knees but certainly full hearts. The Montane Trail system and the Fernie Dirt Jump Park are also great spots for kids to get started on their bikes and spend the day as a family.

I asked if Spicer had any advice for new parents wishing to teach their children how to bike and I loved his response. Spicer’s first tip was to “take it easy.” I think that this is wonderful advice for anyone wanting to start a new activity. Take it slow and be sure that your child actually enjoys being on a bike before jumping into a strenuous long ride. “Take a ride around the block and see if it is something they even enjoy.” Spicer began by taking Silas along the dyke but warns that cruising along the river may result in toddlers preferring to stop and throw rocks into the water instead. A great purchase to get your child started would be a Chariot or a Shotgun Mountain Bike Seat. These tools are incredible as they allow parents to enjoy a bike ride while easing toddlers into the feel of being in momentum on a bike. At the end of the day, Spicer’s philosophy is to “have fun with it as that’s what it is all about.” I think Silas would happily agree.

Are you also a Fernie Mountain Mama? Please feel free to share your outdoor adventures, family stories and photos by writing to ferniemountainmamas@gmail.com, or hashtag #ferniemountainmamas to encourage more parents to take their little ones outdoors and share in all the fun that Fernie has to offer.