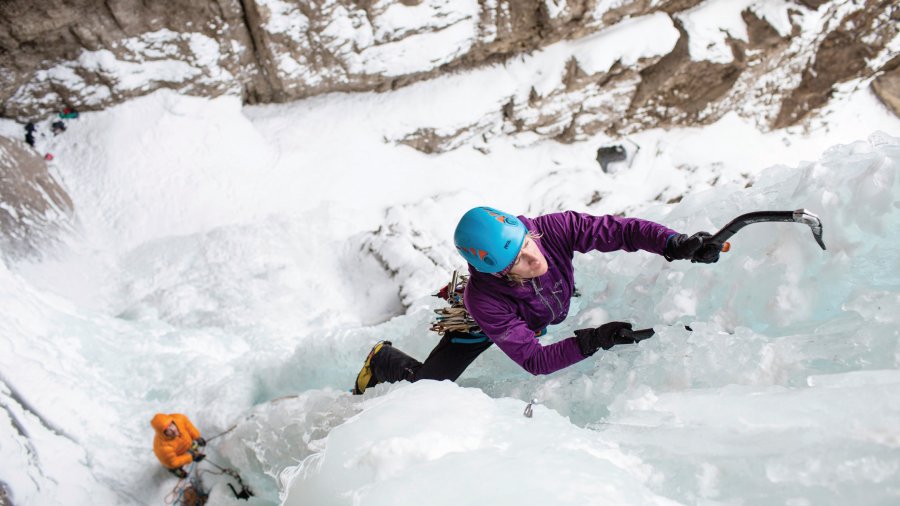 Alpine guide Sarah Hueniken has had an impressive career in the mountains, but this past January she accomplished something especially exciting: completing the first ever successful ice climb up Niagara Falls, along with Will Gadd. On January 27, the two adventurers climbed up a 9-metre-wide strip of frozen spray up the left side of Horseshoe Falls, the biggest and most powerful section of Niagara Falls. Getting permission for this feat took the team many months of planning and efforts with the NY Parks Service, and the result was a historic and visually stunning first ascent.

Raised not far away from the famous falls she climbed, Sarah took an Outward Bound course as a teenager, and loved living each day outside. She felt really rewarded and able to live in the moment. The experience led her to work at canoe-tripping camps, Outward Bound schools, and later as an instructor for NOLS (National Outdoor Leadership School). Sarah enjoyed the intensity of working hard on long trips balanced with time off afterwards. Sarah currently lives in Canmore and is one of only ten women in Canada to have ACMG rock and alpine certifications. She runs a variety of courses, including women’s winter ice climbing courses, and also does private rock, alpine and ice guiding.

What aspects of your personality do you think make you well suited as a guide? Are there any traits that you feel were important for you to develop throughout your career?

I genuinely want my participants to have a good/rewarding day and to leave feeling like they are psyched and proud of themselves. With that as the overall goal, it helps me focus on their needs, which is important. It’s important to love climbing, but it is more important to love sharing it with people. My biggest challenge in the career was pacing myself. I would invest a lot of unnecessary stress prior to a day out, worrying about conditions and things I couldn't control all the way to stressing about running a perfect day throughout the day, that I would get home pretty exhausted with little room for other things or people in my life. It’s taken some time to find that balance so that my job still leaves me with some personal energy.

Do you have any strategies or routines that help you stay motivated during times when your energy is low?

I used to try and fight through low energy, but I think I've gotten smarter with age. Nowadays, I still get frustrated when my energy levels are low, but I've learned to listen to them and be okay with a day or two in a row of doing nothing physical and just try to let it be. Fighting low energy days usually results in more low energy days!

You have made some really impressive first ascents. Were Schacun, Perseverance and La Vagane goals of yours for a while?

I was fortunate enough on both those trips, to be asked to join. I didn't have my sights on these until I knew I was going there. As much as I'd like to say these are things I have dreamt about and worked hard to get to and organize, the reality is, I'm a bit of an opportunivore.

The preparation is the same, but the mentality is different. As a first ascent on something, you aren't ever sure of the outcome, or what you are getting yourself into. You have to be a bit more malleable and determined because there will likely be more stumbling blocks and unknowns that will slow the process down. You also have to trust your ability to handle those unknown factors that come your way and that usually comes with experience.

How did you and Will physically prepare for that route? Are there any ice climbs in your area that mimic that climb on a smaller scale?

Will and I had spent last winter putting up a 7-pitch M12 multi pitch in Helmcken Falls with John Freeman and Katie Bono – an area that Will had spent a bunch of time in and was sort of the first area where climbers explored Spray Ice. Niagara Falls was similar to this place in terms of the ice quality and also the landscape of climbing so near to a big spraying waterfall. We also both spend a fair amount of time hanging on our tools in the gym and ice guiding, so physically the climb felt well within our ability.

It was a powerful place, and there was a fair amount of pressure to see the day through safely. That was probably the most exhausting part. Knowing that we had the first legal permit and there were a lot of people watching and needing the day to run safely. There is amazing climbing potential down in the gorge there, and we knew that the success of our day would either help or hinder the chances of that area getting opened up down the road.

What did you do the day after you scaled Niagara Falls?

The day after we climbed Niagara, I flew home. I was really excited about a climbing day I had planned with some friends to climb Nophobia... a 5-pitch M10+ route that I wanted to get done. It was worth going back for!