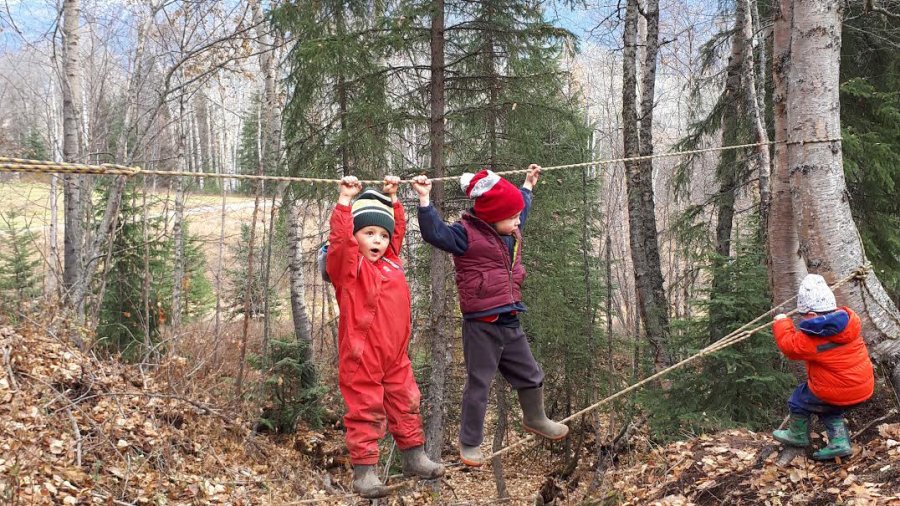 If Einstein was right (and I think he often was) in stating that imagination is more valuable than knowledge, then schools that focus on creating space for imaginative play are exactly what we need. Enter: Forest School. Enter: Little Einsteins.

Local mother and educator, Courtney Haeusler, found herself inside the classroom gazing out the window and longing to play in the falling snow amongst the mountains. She dreamt that one day she could take education to the next level: outdoors. Her partner, Erich Leidums, also an outdoor education enthusiast, was readily on board as they had just welcomed their first child into the world. Together, they established a non-profit group called Outdoor Connections. The team’s goal was to provide “affordable opportunities for children of all ages to connect to themselves, to each other and to the natural world.” In the beginning, they provided outdoor summer camps, after-school programs and no-school Friday adventures for school-aged children. As time went on, Courtney, now a mother of two, became involved in a “newly developed Fernie
(informal) forest school group which consisted of a few parents wanting to get outside with their little ones.” By winter, Courtney received a phone call from a local teacher named Sinead Murphy that would “change everything.”

Sinead had heard about Courtney’s involvement with the informal Forest School group and wanted to know more. “We chatted and before we knew it, we were both signed up to take the Forest School practitioners course in Calgary that spring. Sinead and I spent the summer preparing and planning, and officially opened Forest School in September 2016.  In that first year, we were running just one class of 12 students, as well as completing our Forest School assignments online. We spent the year reflecting, reading, discussing and adapting which really helped us create a program that was meaningful and intentional.”

The Child and Nature Alliance of Canada has outlined 10 principles that many of the Forest Schools in Canada follow, which Courtney summarized here:

• Take place in a variety of natural spaces
• Regular repeated sessions in the same natural spaces
• Views children as competent and capable learners
• Led by a qualified Forest and Nature School educator
• Values play
• Views the opportunity to experience risk as an integral part of a child’s learning
• Uses loose, natural materials to support open-ended experiences
• Values the process as much as the outcome
• Seeks to honour the past and current realities of First Nations, Métis and Inuit peoples
• Builds diverse communities
“Each day at Forest School can be very different. Sometimes the children work collaboratively solving problems, creating imaginary worlds, and decoding their social world together.” While other times children may play independently, finding joy and “comfort in their own creations, thoughts and observations. We have no toys and no traditional learning resources. Rather we have sticks, rocks, rope, leaves, pine cones and stumps!” The world, or forest, truly is their oyster. The children thrive in this free environment of imagination and play. Forest School takes place on over 60 acres of private land just 12 kilometres south of Fernie. Courtney reveals that students gain “improved physical stamina, growth in confidence and social skills, and an improvement in creativity and critical thinking skills.”

Forest School operates their preschool classes on Tuesdays and Thursdays for children ages 3-5 years old. They also deliver a 5-7 year old class that runs on Wednesdays. Applications to join their Forest School open online in March every year. You can also go to their website at connectoutdoors.ca/forestschool and apply online.

Over the past four years, Forest School has been going strong and Courtney “finds it to be one of the most holistic and rewarding jobs [she has] ever had.” She wanted to thank her dear friend Sinead, her family, all those who are a part of their Forest School family, and especially Sonya and Marcel of Birch Meadows, for their continued support of outdoor play and learning.