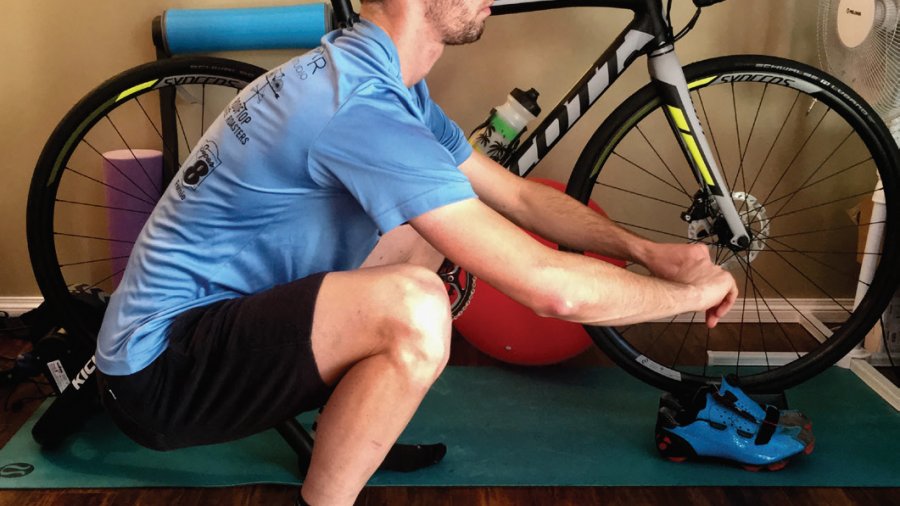 Hopefully by now everyone has been out doing whatever their winter activity is, snowboarding at the hill, skate skiing around the Nordic trails or even snow biking. In this segment I met up with David Gillies, a Registered Massage Therapist with a B.Sc. in Kinesiology,  currently based out of Spa 901. We spoke about some ways to stay strong and fit all winter long and keep our bodies working the best they can.

During the ski season I’ll start to ache and get sore in my glutes, I don’t think I'm alone in this. This comes from spending too much of our life sitting: at the computer, in the car, and even on the chairlift. I was surprised to learn that my glutes are tight because they are always stretched, so stretches such as pigeon pose are only going to make this worse.

Instead of stretching, one of David’s go-to moves is tall kneeling with rotation. Set up upright on both knees, which should be slightly wider than shoulder width with the feet together with toes pointed, get tall through the crown of the head but don't puff the chest out. Take a few deep breaths, then look to the left, slowly rotating while trying to look as far behind you as possible.  You’ll feel the right glute contract and possibly a stretch down the lateral quad. Visualize breathing into this tight spot and you should feel your glute contract harder enabling you to rotate further. Hold for about a minute and repeat the other way.

All human locomotion is based on rotation; when we’re young we crawl and climb but as we get older our movements tend to become increasingly linear. Being able to hold a plank for five minutes is great if all you plan to do is bomb straight down the ski hill. But since most of us enjoy turning it's important to train your body for that.

Think of the tall kneeling with rotation exercise as a plank at your end range of rotation. The further you can rotate with control the easier it will be to turn. If you are better at turning left, either on skis or your mountain bike, you will probably have more difficulty rotating left in tall kneeling. Doing this exercise will not only increase your performance on your skis and bikes but also day-to-day life, while becoming less injury prone.

Rolling out our muscles after sport is not a new concept but rolling is often performed incorrectly. It’s a very simple change to make, don’t use the roller like a rolling pin. You just want to roll up and down in order to find the most tender spot then pause on that spot for a minute or two while gently trying to squeeze that muscle. This will combine sensory (see: pain, but not too much!) signals to the brain with motor output signals which will cause more permanent changes.

This last move is the easiest one to do multiple times a day. You can perform this while making coffee, waiting for microwave, in-between commercials while we watch the hockey game or the Olympics coming up. It’s a very simple yet effective deep squat. Keep the knees wide and settle down into a deep squat position. Maintain contact with the whole foot so your arch doesn't collapse inwards. You’ll probably feel a pinch in the hip flexor, try to keep the back straight, chest out and head tall and breathe deeply into the front of the hip where you feel the pinch.  Try to hold this for 30 seconds to start with, as you get stronger you can hold for longer. If you are unable to get all the way down without falling backwards gently hold onto something, the kitchen sink works perfectly.  Children will squat in the sand pit for hours in this position; can you?

These simple, easy moves will greatly increase you fun and performance in what ever you chosen sport is. All of these moves can be performed anywhere, in the locker room, in front of the computer or in the kitchen while your coffee is brewing. Don’t be concerned with how long you hold each move for but try to do lots throughout the day. It is way more effective to do each move 10 times for 1 minute rather than once for 10 minutes.