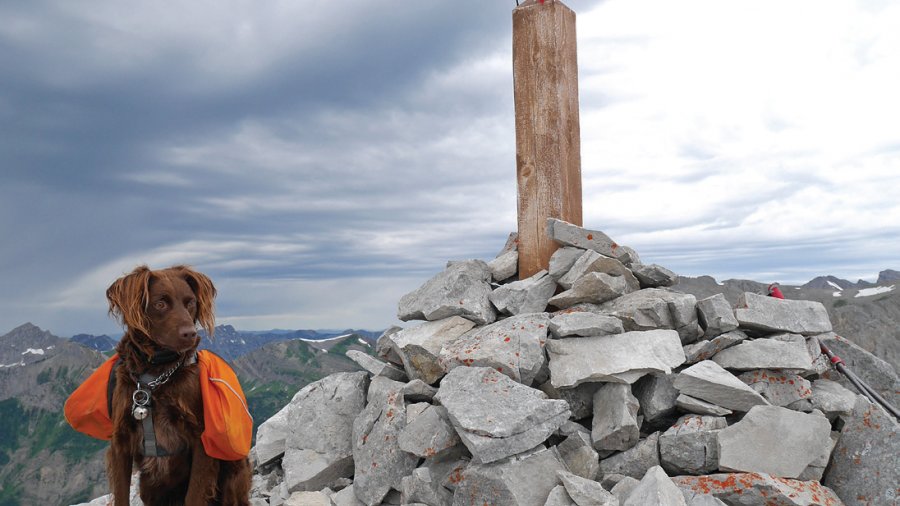 My bucket list is made of mountains. Mountains I've yet to climb but hope to, ones with deep-blue lakes and jagged ridges, where the summit leaves you feeling infinite.

Around Fernie, I've climbed most of them; Mt. Fernie at least five or six times, Three Sisters twice as much, Hosmer Mountain thrice. But never Mount Proctor. I ignore her, pretend she isn't there.

I'm not entirely sure why, less curb appeal I suppose.

Mount Proctor's unthreatening to the eye—a green slope of pine and avalanche chutes, she pales in comparison to the naked layers of the steep rocked Three Sisters, to the Ghostrider tale attached to Mt. Hosmer. The moment you hike Proctor, though, you realize none of it's true. Proctor's mean, gruelling, never-ending, and glorious.

Ben and I hike Proctor on an early-August day with our dog, first up the popular Swine Flu bike trail and then onwards past the bench. The trail's worn, though less-so the further elevation we gain. Trees thick, bush dry, the way summer leaves everything a little thirsty.

We reach a rocky outcrop, not yet halfway up, then lose the trail because we choose to. Cutting across the front face between Indian Paintbrushes and daisies, we do our best to guess a route. Then the weather turns.

“Looks like a storm's coming,” I say aloud, to Ben perhaps, though more to remind myself of the potential risk. Blue sky above the Lizard Range turns a deep navy and black; before long deep thunder roars close by.

“Time to find a hiding spot,” he replies. We strive for lower elevation off the ridge, and when the clouds are nearly overhead, make a call and head for a tree.

Hidden beneath the branches against the base of a pine, we watch the rain hit Fernie. In waves, gentle at first, then in sheets. The air cools, and before long water pelts against the tree, above our heads, against our GoreTex coats. The dog, afraid of thunder, hides under our legs.

Like any summer storm though, this one passes and we carry on.

The trail reaches rock, a false summit, and we hike the ridgeline. Cliff below, a jagged peak above. Another false summit, more rock. The dog's paws likely hurt, but the sound of chirping pikas is enough to distract him. Finally, four hours after stepping foot on the trailhead, we meet with a Canadian flag on the summit of Proctor.

“Unreal,” I say. 'Unreal' is how I describe any geological phenomena I can't grasp. We're 7,851 feet above sea level overlooking the Elk Valley, though still below the summit of Three Sisters. There's a patch of snow, some rocks, a wooden post.

And, of course, the feeling of infiniteness.

I crave stillness, to sit on a piece of limestone and savour the slight breeze, the panorama. We don't dawdle, though. More storm clouds creep towards us and we have another six kilometres to loop back to valley bottom. As we descend into Proctor Bowl, the rain hits.

The next six kilometres are wet. Happy to have poles to alleviate the impact hiking has on our old(er) knees, we slog down slippery rock and try to find the trail. We meander wide-open alpine, wildflowers in illustrious bloom, then between thick brush—so thick I think of grizzly bears.

An hour later and back on the main trail, we reach the upper bench of Fairy Creek and nearly step on a lumpy forest toad. He's come for the rain, thirsty like the leaves that camouflage him. I place the toad on our dog's head, for fun.

Mud clings to my legs, and the dog slows to a saunter. I slow to a pathetic walk, my feet and legs and arms and toes aching with the day. Then Ben slows, too.

“Sweet Lord this goes on forever.” I'm not sure who says it.

As promised, the Proctor Loop carries on. And on. And on. Until finally we reach familiar trail near Fairy Creek Falls and then, shortly after to the valley bottom. Twelve kilometres, eight hours, Proctor summited.

My bucket list is made of mountains. Mountains, hikes, tents, wildflowers, summits, campfires and dog snuggles. How about yours?