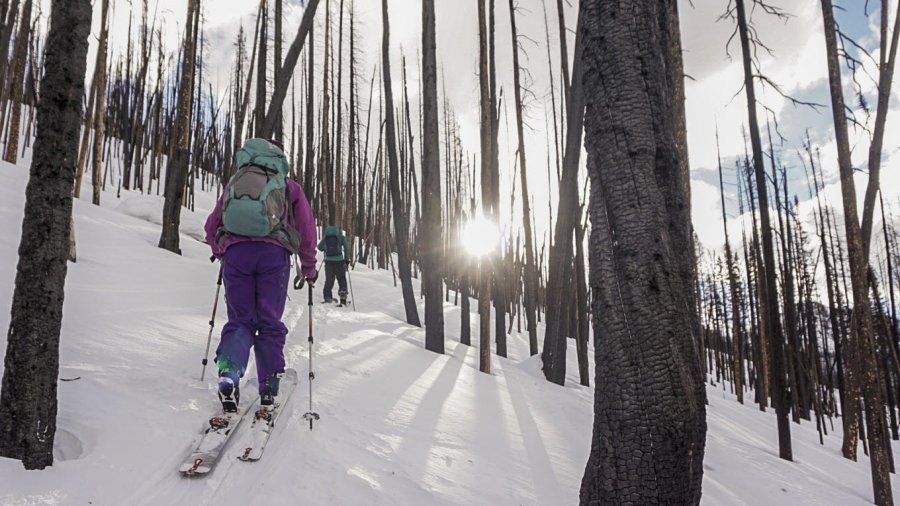 I stop for a rest and look back to watch her progress. My admiration for her grows with every step she takes. She moves along the up-track slowly and methodically, eyes cast down at the path ahead. She’s slower than she used to be, but who can blame her. She is walking for two now. I wonder what thoughts are coursing through her mind. I wonder if the second heart beat in her belly beats in rhythm with her own.

Things have changed now. How can they not? Decisions we would have made six months before, about where to ski or how much we can possibly fit into one day have more consequence now. It’s no longer just ourselves we must worry about.

The day is calm and friendly as we slowly make our way up through the scorched landscape. The black, burnt carcasses of trees standing like brave warriors in the white blanket of snow. The slope is gentle, and the fresh snow is quiet under our feet. Everything you could ask for from a day in the backcountry. At the same time, we know it would take hours and a significant snowmobile ride to get to the nearest hospital if anything unfathomable were to happen.

We don’t talk much about the growing bean in her belly. We focus on the present. Reveling in the moment of being perfectly free and wild. Not quite willing to admit that it’s a freedom that has a time limit. I selfishly experience a twinge of sadness knowing that because her life is changing, mine will too, simply by default. I think about my own mother, ski touring well into her third trimester in Australia and wonder if she felt similar apprehensions. A woman, whose fierce spirit and thirst for adventure is similar to ours, must have given up many a wild escapade to raise children of her own.

Two years later I stand at the bottom of the ski resort and watch her now one-and-a-half-year-old daughter take her first run down the magic carpet. Her eyes as wide as saucers as she takes it all in and manages to keep her balance as she is released from the safety of her father into the waiting arms of her mother.

It’s not lost on me that it has all come to pass. The alterations. The limitations. The deviations in the way adventures are executed not to mention the adventures themselves. But without a doubt there are still adventures. We still have our backcountry days, but they are fewer and now intermingled with the satisfaction of watching the newest generation of adventurer rise and discover. Sometimes we can still sneak away for an overnighter in the mountains, but often, it’s just as enjoyable to have the kid around.

My mind wanders to the community of women in the East Kootenays. Some with kids and some without, but so many inspiring the next generation. So many inspiring the current generation. And all continuing to push boundaries as to what it means to be a mother, a sister, an aunt, a friend and a lover of the mountains. I think about the women before me who paved the way. Women like my mother, who was the only woman on many of her first forays into the mountains, not having the benefit of other women to help her know it was even possible. It’s because of them that my generation and the next, can believe that this is normal, can be confident in being leaders in adventure and not just along for the ride.

As I look back to the magic carpet to watch my friend and her daughter, I see the progression of decades of strong, capable, adventurous women and I know, without a doubt, that the future is bright.