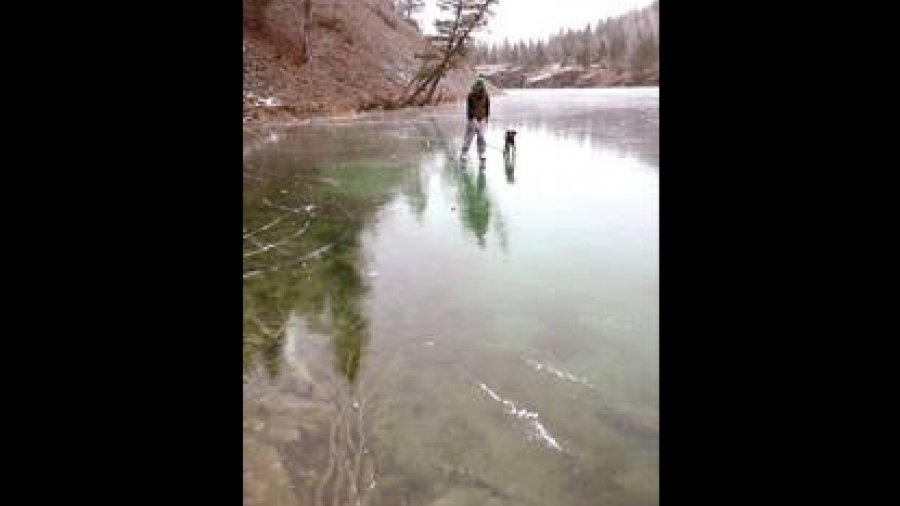 A skater I am not.

I was the kid that crash-landed into the boards at the hockey arena. You know the one, who used the skate mate to balance while everyone else zoomed past.

So when all of the ponds and lakes in town began to freeze with a cold snap in late November, it should come as no surprise that my first activity of choice was to snuggle into a blanket on my couch.

Unfortunately, I hang around with people who are less than inclined to do the same.

After some convincing, I find myself on the dock at Maiden Lake with my first pair of hockey skates. I tighten the white laces and awkwardly pull myself to my feet. The lake has thickened to nearly four inches, making it incredibly safe to skate on.

The skates aren’t the most comfortable footwear I’ve ever donned, but they certainly aren’t the worst. I use a hockey stick for balance and push a few times on the ice, slowly propelling myself to the middle of the lake.

It’s a brisk, blue-skied morning and the ice is smooth and flat. I move in and out from the shore, my cynicism quickly disappearing with each stride. This is much more fun than I remember. Then again, skating outdoors on a lake is incredibly different from skating in an arena.

The ice moves up and down ever so slightly as I skate over it. Large cracks in the ice run from one side of the lake to the other. And as we skate around the lake, I swear I hear Star Wars blasters.

“Pew, pew, pew.” All I can picture is fluorescent pink beams firing back and forth. In actuality, what sounds like laser guns is the result of sound waves moving through the ice, from the ice shifting to the pressure of our body weight on top of it.

Soon, an elderly man bundled in red and black plaid walks by with his dog.

“That looks like fun,” he yells from the shoreline, a child-like smile spread across his face.

We skate around a bit more with the snow-covered mountains as our backdrop, before finally heading in for lunch.

Later in the day I head back to the lake to see a couple of friends who’ve gathered to take advantage of the new outdoor rink. What I find is more than ten people, donning heavy knitted sweaters and skating around as if they were kids again.

Over the next couple of days, when I walk or drive by the lake, more skate marks graze the surface. A group of boys have set up a hockey net and are playing shinny. A man plays with his dog, running on the ice. Parents bring their children out to learn to skate.

On a Thursday morning Ben and I decide to head out of town to skate at Silver Springs. A local hotspot, and one of my favourite places to visit in the summer, I’ve never actually been there after the snow falls.

We hike up the trail to the lake alongside a very frozen stream, and when we arrive it’s no surprise that Silver Springs looks incredible. The ice is five inches thick and as smooth as glass, the clear blue-green water making it possible to see to the bottom of the lake.

I tie my skates and then spend the next two hours skating from one end of the lake to the other. Fallen rocks sit on the ice below the jumping cliffs. I see a fish swimming underneath, a fallen tree. The rock garden across the lake is blanketed in snow.

And it is so quiet; except for the sound of my skates carving the ice, and the odd bird flying overhead.

I’m bundled in sweatpants, a vest and a pom-pom toque, cruising around the lake in my new hockey skates. How could I never have done this before?

We pack up and head back down the trail, my skate laces looped around my neck. It’s a new year soon, and I’ve just discovered something else I like to do.