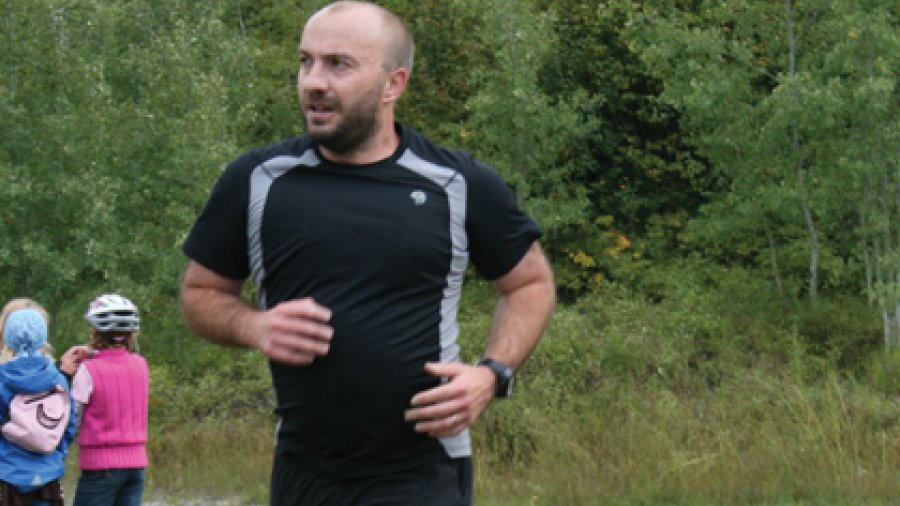 There are so many individuals in our community that recreate and challenge themselves on a regular basis, but do so a tad more behind the scenes than say previous Racers’ Corner national mountaineer James Minifie or upcoming Tour Divide competitor Paul Attalla. Phil Gadd is one of them, and it wasn’t until he pulled an amazing finish in last year’s Tears & Gears that it was brought to my attention.

Since then I’ve recognized that Phil has the oh so familiar signs of someone infected with the “push it” bug. Planning his excursions, tracking routes, time and distance, staying up to date on what’s available to ride or run, setting goals for himself, and probably other “tactics” I haven’t uncovered… yet. But how did it all begin for Phil? That was my big question.

Phil admits that it all began (or began again really) when he and his wife Claire and daughter Eve moved to Fernie. As an editor in commercial production for 16 years with a young family, Phil and Claire were ready to embark on a new journey, to a community they could raise kids and, “feel passionate about living.” A lifestyle change was the original reason for the move, but it just so happened that the opportunity to open Loaf was presented at the same time. “I was meeting a friend for lunch in a new bakery that was just like a London eatery. At the time we were well into applying to live in Fernie, but obviously didn’t have any relatives, skills, etc. I left the bakery thinking it could work in Fernie.” And it has and not only for his business. As we sat in Loaf during this interview, discussing this transition, Phil admits he can see the changes in the kids already, particularly in Eve who is skiing and biking. “It’s amazing,” he says.

Fernie changed Phil as well, reigniting a passion he had long forgotten - running. When he was young he competed at the county level, comparable to our provincial level, along playing a variety of other sports. As he continued with his studies in university he, “tailed off a lot of stuff, and then working in London made it hard.” He was reading the book the Marathon Man at the time, and found the story fascinating - how he got back into endurance running after going into the corporate world. “He’s in a bar, getting drunk, getting hit on by women as a married man. And he walked out of the bar and started running. When you read something about someone doing something so ridiculous, it shows you anything is possible,” he remembers.

The year of their arrival 2009, Phil completed his first “proper race” since he was 19, a lapse of 15 years. He set a goal of finishing the Fernie Half Marathon with a time of 1:45, and did it in 1:44. The following year he was quite busy with Loaf (and three children) so his time was very limited, but as he enjoys running he decided on challenging himself once again. “Tears and Gears in 2010 was great. I didn’t train for it, but enjoyed it,” he says, admitting that the bike portion hurt.

Phil continues to push himself as he likes having the motivation to train for something - a goal to achieve. “You set goal after goal after goal with a business, and it’s the same with races,” he says. It’s never about winning for Phil, more about realizing his own personal goals. “If you put your mind to something, you will eventually achieve it.” Good luck this summer Phil!

1. What is it about competing you love? Achieving goals - personal goals.
2. How do you prepare/train for your events? Haha - randomly. I just get out there and do it. I don’t have anything set, I just try to make sure I’m physically ready as I’m not competing for position.
3. What are the events you are competing in this summer? Tears & Gears and I think I’m going to do the Heiko’s Hellish Half, and then probably the Fernie Half Marathon as well.
4. What are your main goals when competing? Probably the times I set for myself. Personal Bests I guess!
5. How do you think Fernie's recreational side has changed since you've lived/visited here? There seems to be a lot more organized clubs and races, or maybe I just wasn’t aware of them when I was first here. There’s more stuff to set goals for in Fernie, along with the additional events just outside of Fernie. It’s good to have a lot of choice!