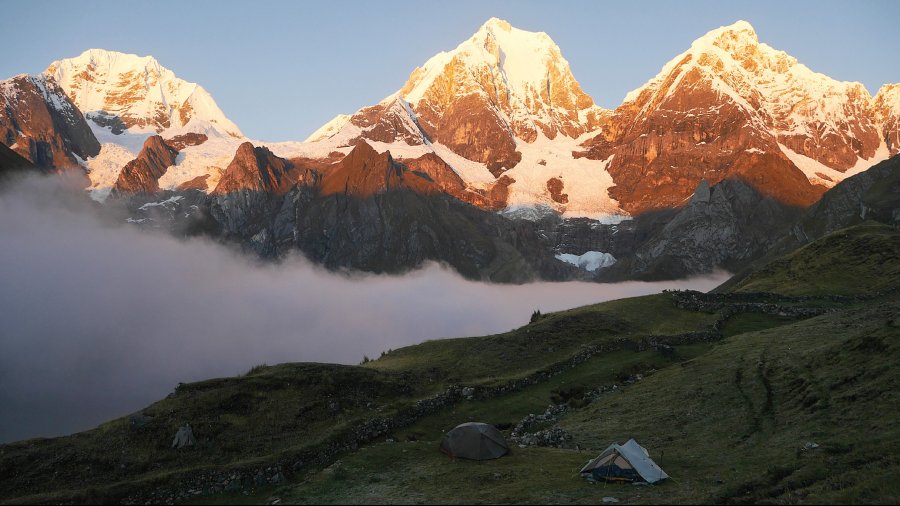 There's a white-haired donkey standing along the banks of a river in the morning mist, and my food bag dangles in his mouth.

“Drop it,” I say. There are 10 days worth of food in that bag. The donkey looks me straight in the eyes, the same donkey whose ears I affectionately scratched the day before. With one swift swing, he tosses my entire bag in the river.

“YOU BASTARD!” I run, then plummet into the river to catch food that bobs in the waves. The thieving donkey munches on my peanut-butter energy balls, apathetic to my plight.

If I've learned anything while in Peru, it's to never trust a donkey.

Ben and I are on the sixth of 10 days around the Huayhuash Cordillera—a 110-kilometre trekking circuit in the Peruvian Andes. Huayhuash is one of the best alpine treks in the world; ice-covered peaks, thatch-roofed mud huts, herds of sheep, turquoise lakes.

Never one for fancy hotels and extravagant travelling, we pack a tent, dehydrated food, map and compass, and after four days of acclimatizing in the nearby mountain town of Huaraz, step onto the Huayhuash as two independent hikers.

On the first day, the rocky landscape and meandering streams are breathtaking, but it's the thin air that leaves me breathless. Each step's in laboured exhaustion. My pack weighs nearly 40 pounds, and my lungs gasp for oxygen. At 4,400 metres—14,400 feet—hiking feels heavy. This is why some people choose to hire guides; donkeys carry your gear and you just, quite simply, walk on.

Donkeys pass us followed closely by their arriero (muleteer). He's a tanned Peruvian man in a white top hat and red jacket; we laugh when his donkeys fart along the trail. We say hello in Spanish, and he soon disappears down the ridge.

We camp in a grassy meadow that night, and awake to the intimidating spire of Jirishanca mountain above. I sip coca tea, warm up with the heat of the sun, and think how wonderful it is to wake up in Peru.

That night, after encountering a charging bull and tackling two passes, we pitch along Lake Carhuacocha next to a couple from Belgium. We make fast friends over shared cookies and hiking stories. Jirishanca, Yerupaja (Peru's second-tallest mountain) and Siula Grande tower at the east end, and the setting sun burns ember red against their grey flanks.

I've never seen mountains so big in my life.

We tackle rain and hail, altitude sickness and tingling fingers. At the end of the fourth day, we find ourselves in a natural hot springs with two Peruvian guides—one is the arriero with the white hat and red coat, named Allende. The other is Javier. They guide foreign guests along the hike every year. Huayhuash is their home.

Ben speaks Spanish with them while I savour my wrinkling toes and fingers, the hot water on my back, the subtle smell of sulphur. It's the dreamiest respite after four days of hiking. I make friends with Allende's white donkey, scratching between his ears and along his snout.

We climb to our highest pass the next morning, Punta Cuyoc. Alpine cows graze in the fields, the sun casts shadows as clouds move overhead.

Our new Peruvian friends invite us to pitch next to theirs at the next campsite. Allende invites us for coca tea, jokes in Spanish that we should make a baby on the Hauyhuash, and name the baby Huayhuash when back in Canada. We laugh, jokes fluid between culture.

That night, Allende whispers my name from outside the tent.

“Jessica,” he says, sliding a plate of food freshly made underneath the vestibule. We're ecstatic and devour the fresh dinner, a nice change from dehydrated meals. The next morning Allende's donkey eats my energy balls—I guess that makes us even.

Our backpacks grow lighter, though my hips ache from sleeping on the ground. Ben's sleep is constantly disrupted by thin air. After a sneaky feed of panqueques (pancakes) from Allende and Javier, we hike to a mirador. The towering summits we walked around hang above a bright turquoise lake—we've come full circle, Huayhuash nearing its end.

Two days later we walk to the town of Pocpa. I haven't washed my hair in 10 days, haven't seen my face in a mirror, have no idea what exists lately outside of the people on the trail and the sheep in the hills.

And my heart happily skips a beat for Peru. Even for the donkeys.