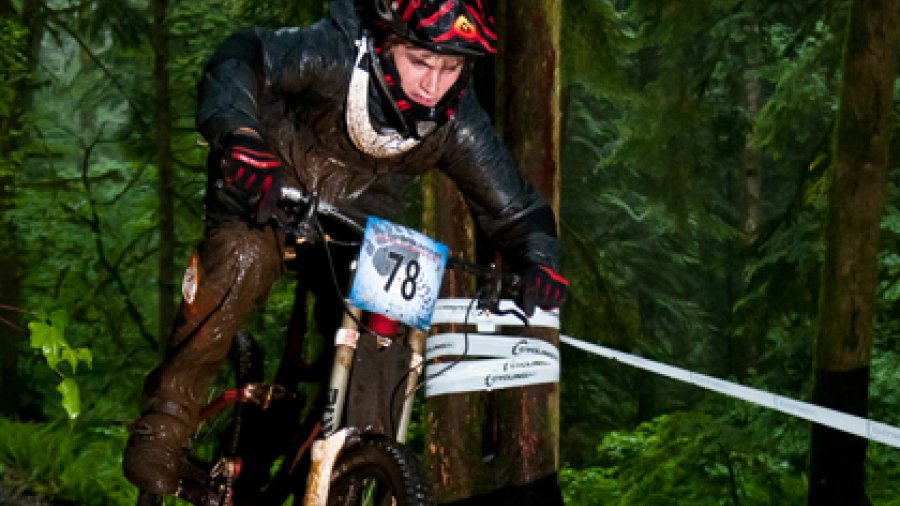 Last year I had the opportunity to ride with Nick Dunn on Three Kings, 48 Hrs and Dopamine. I use the term “with” loosely as he was miles ahead as I attempted to find my way down these epic trails (I actually volunteered to shuttle for the last lap on Dopamine). I wasn’t surprised to learn that he was a rising star on the downhill mountain biking scene and was happy to catch up with him again this year as he continues to make a name for himself in the field.

Nick is going into Grade 10 at Fernie Secondary School (FSS) and only got into mountain biking a few years back when his parents saw an ad for a mountain bike camp at Fernie Alpine Resort (FAR). “I was on a super hard tail and was hooked,” he says with a smile, adding that he actually cracked the frame and ended up using his mom’s bike for the remainder of the season. The following year he got a new bike, “And from then on I got a new bike every year!” he says, mentioning that it’s “pretty sweet” to be sponsored by The Ski Bass, Kona Bikes, and Vans Shoes and Apparel. Racing all began when Nick started entering the Thursday night race series at FAR. “It was my second year of biking for fun, and thought the races ending at Kelseys and the free drinks would be fun so kept doing it,” he says modestly, refraining to disclose his general butt kicking!

Nick’s first official sanctioned race was the Alberta Cup in Blairmore in 2009. “It was pretty good. I had a couple of big falls but was fine and had fun,” he remembers. “My parents are super supportive, I can’t even describe how much. I would be doing nothing all summer without them. They’re both pretty big bikers. It’s pretty fun to ride with them every once in a while,” he adds.

When racing downhill you are timed by how long it takes you to get down – period. Racers are given two days of practice prior, with one being closed so they can walk down the course. This year Nick is racing in the Expert category, which you need a certain amount of points to qualify for. “I might try to get onto the BC Team, then I get to go to Vancouver and train all winter with a personal coach. It would be sweet to be on a team like that, working with team mates to figure out lines and have people to bike with,” he says. He does feel fortunate to have a lot of mentors in Fernie, including Luke Nelson, Conrad Spring and Derick Bird. “These guys help me out, shuttle me to Dirt Diggler and let me tag along,” he adds.

Training in Fernie can be hard as the season is pretty short, “You know that the guys on the coast are riding all winter and you have to keep up with them,” he says. “I want to be doing this as long as I can ‘find my speed’. It’s the funnest thing ever.”

Good luck Nick, you have the right mind set - “results come when you’re having fun” so true in anything!

1. What is it about competing you love? I just love the energy at the top of the course – everyone is so stoked to get down, go as fast as they can, and hit all the right lines. It’s super positive, encouraging one another, and it’s a great learning experience.
2. How do you prepare/train for your events? I ride two and a half hours almost every day, all week and when the ski hill is open I do as many laps as I can. I also stretch lots, stay as fit as I can and eat right.
3. What are the events you are competing in this summer? I’ve done the Double Down Hoe Down in Spokane, Race the Ranch in Kamloops, Bear Mountain Challenge in Mission, I unfortunately missed Nationals but got to go to Canada Cup the week after, and am going to try to make it out to Mount Washington for BC Provincials, and then NOS Gravity Downhill at FAR, BC Finals in Hemlock, and a couple of other races down in Spokane.
4. What are your main goals when competing? To have fun and do my best, because results come when you’re having fun.
5. How do you think Fernie's recreational side has changed since you've lived/visited here? It’s definitely improving, it’s getting way more open with more events and everyone is starting to do more recreational stuff… that could also just be me growing up!
6. How do you maintain balance in life? I try to ride in the mornings and evenings, so I can hang out with my friends and family during the day when it’s warm out… plus it’s a pain to ride when it’s +30 out.