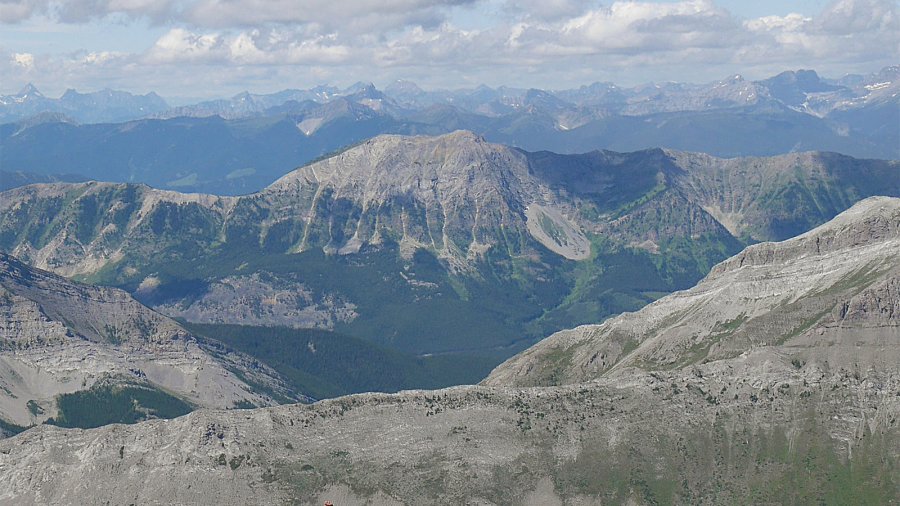 The mountains kindly provide that sense of freedom I rarely find elsewhere. They are intoxicating, wild, a teacher for those ready to listen.

There are those mountains, though, that stare down and ask, why haven’t you climbed me yet? On so many occasions from the summit of the Three Sisters—a mountain I’ve climbed aplenty—those unknown mountains entice me.

Fisher Peak, jagged and towering above the skyline, is a slender temptress. Crowsnest Mountain, just across the Alberta border, screams impossibility from its cliffs and scree slopes. At home, Proctor Mountain has always been just whispers, whispers of a never-ending distance, a punisher. If you so seek that freedom, though, I suggest you hike all three.

I tackled Fisher Peak (9,336 ft, 10 kilometres) with six girlfriends four years ago. Rumours were that the hike was gruelling; a steep 4,400-foot elevation gain with little respite in the way of flat ground. The trail begins at Mause Creek Rd. and leads up a steep forested slope. Switchbacks open to a rock garden, the shrill chirps of marmots echoing in the valley. Then a quiet pool of water offers brief serenity before the second portion of the hike comes into view. At the back of the bowl there is a col in the mountain, preceded by a scree chute. Hikers must navigate the chute and prepare to slip with each step. It helps to have friends for hikes like this, friends who encourage one another to keep going.

When we reach the col the crystal-blue Nichols Lake comes into view, a glittering gem tucked between two peaks. Hidden mountain lakes have always been something that, as a hiker, I feel privy to; enchanting
little secrets meant only for the eyes of adventurers.

The last 200 feet is the most technical. Don’t attempt to ascend on the northwest side; instead stick to the ridge and look for four yellow markers spray painted on the rocks. When we reach the summit it is easy to understand why Fisher is so paramount; we stand on top of a giant rock, sudden queens of the East Kootenays.

On a morning in mid-July in the summer of 2016, friends and I summited the seemingly unsummitable Crowsnest Mountain (9,137 feet, 8 kilometres). From Hwy 3 it would appear that its layers of scree slopes and limestone cliffs aren’t navigable, but a route does exist.

Alison Creek Rd. leads to the trailhead and a wooded walk quickly falls way to scree scramble. An old sign, weathered from years of that infamous Crowsnest wind, points at the difficult route—the only route—straight up past the first headwall, then a traverse below the second headwall to an obvious gully. The gully is hazardous and constant awareness of sudden rock fall is mandatory. The narrow draw leads to the crux of the scramble—a sheer slab of rock with only a rusted metal chain for control. A few of our group turn around at this point, but six of us continue on. Past the crux it is a moderate scree ascent to the summit.

At the top there is a true feel for how the mountains meet the prairies, smooth grassland colliding with saw tooth pinnacles. My friend Helena and I can’t stop smiling, both so happy to have summited.

A few days after Crowsnest, I decide to hike Proctor Mountain (7,851 feet, 12 kilometres) with my partner. Though not nearly as high in elevation, Proctor is a guardian over Fernie; it has always left me curious.

The Proctor loop begins at the Chamber of Commerce up Swine Flu trail, through shadowed forest and then along rocky ridgeline. It is long, at times difficult to navigate, but entirely worth it. As we climb, our sunny day dims with a looming thunderstorm. We hunker down in a hollow and wait out the rain. Once it tapers, we cut across the mountain and the trail opens up to a high-alpine meadow. Red Indian Paintbrushes and other wildflowers colour the landscape.

The trail weaves in and out of jagged rock to the true summit of Proctor, marked by a wooden post and a tattered Canadian flag. From here, hikers can either turn around or carry on the loop between the backside of Proctor and the Three Sisters. The trail disappears for a while, and hikers should stay relatively left of the valley as they descend. Keep an eye out for signs of flagging and cairns (rock stacks).

Eventually the route reappears, walking alongside Fairy Creek back to the trailhead. By now I feel the all-too-familiar ache in my feet; the dread of the last kilometres, and that punishing length Proctor is famous for. There is also the joy at having just hiked another mountain.

No matter the time or place, the height of cliff face, there is certainly magic in the mountains. I hope you seek to find it.