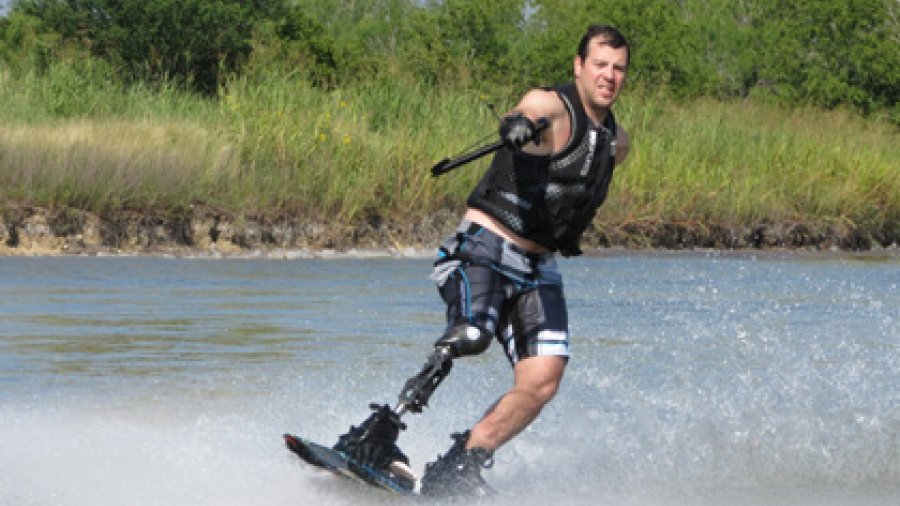 With running and biking ticked off the list, this month we’re stepping aside from the more mainstream sports and honing in on a water-based activity that many a Fernie’ite likes to attempt. From what I’ve heard, it’s hard to grasp and even harder to perfect. There is one Fernie local, who now resides in nearby Cranbrook, has no such issues. Accomplishing, competing and hitting the podium are just the start of things to come.

As many of you know, Mike Rouselle is a household name for several reasons. November 2009 was a life-changing time for him and his family, as he was tragically injured in a work-related electrical accident, surviving, yet losing his left arm and right leg. However, as I learned from his recent accomplishments at the Extremity Games 7 in New Braunfels Texas, absolutely nothing gets in his way.

How long have you been wakeboarding?
“This will be my second summer wakeboarding since my accident but on and off for ten years before the accident. I've been training MMA at a gym across the road from where I work, which is a lot of fun, as I get to punch my boss on a daily basis.”

From looking online at the results of the Extremity Games, you’re described as ‘the newcomer from Canada’ – is this your first big comp?
“That was the first one I've ever done so it was a pretty cool experience.”

How did it go and what did you expect it to be like?
“I thought it went well since I didn't get any practice in before I left for Texas. I thought it was going to be pretty relaxing after the clinics on Friday but when Saturday came the other competitors got serious, so next year I know I need to bring my A game!”

Can you describe what the Extremity Games are all about?
“Anyone who has lost a limb or has a spinal cord injury can compete. It consisted of rock climbing, mountain biking, skateboarding, power lifting, kayaking and wakeboarding. The goal is to get as many athletes as possible. So on Friday they have clinics for newcomers to try out, and if you like it you can compete on Saturday. I wished I could have watched more of the other events, as there were some amazing competitors who were very inspiring.” If you want to see how it is done have a look at www.extremitygames.com for some true inspiration and admiration.

Can you describe the changes that you’ve made and the positives and any difficulties that have come of this change?
“My biggest challenge is trying to live my life as it was before. It was hard to give up on activities that I once loved, but I soon realized that if I just tried, I could still enjoy many of those activities.”

What other comps have you got coming up?
“No big plans coming up, however I'm going to continue to wakeboard all summer so I can be that much more prepared for the Extremity Games next year. I love to challenge myself so we will see what the next year will hold for me.”

This is some fighting spirit, spirit that amazed me, plus a host of other individuals over the past few short years. And it seems like there’s no looking back, as Mike says, “After seeing so many people who are in a similar situation as I am, it reminds me to always push the limits and never accept the limitations that life may put on you!”

Enough said. Here’s to dropping the hammer in August, whatever your limit may be.

Back in June, Emily Agate, Cait Wilson and Leah Spergel headed to Whistler for their first Tough Mudder. An obstacle course featuring mud and obstacles like no other. However, these tough nuts were pleasantly surprised!

“It was actually easier than I expected. It was so beautiful, my mind was so preoccupied I didn't realize how far I was running. The ice-cold water was probably the most shocking obstacle – we all agreed we have never experienced full-body numb quite like that! We have already been talking about getting a team together for next August, and I highly recommend the challenge to everyone,” says Emily.

Calling all nutters out there. Team Fernie is recruiting.