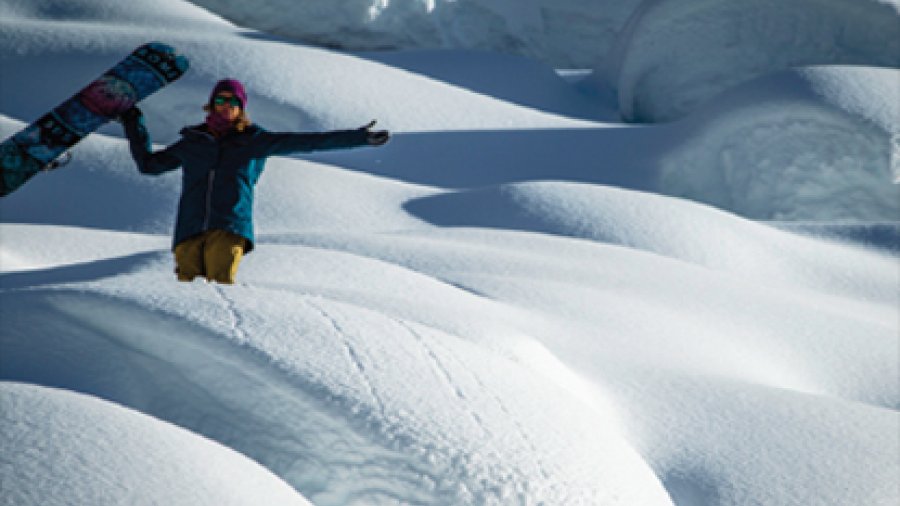 It’s easy to care about the environment when you feel connected to it on a daily basis. Spending time in the mountains or even just appreciating their immensity can create huge respect for them, especially when they are in your backyard. Environmental activist David Suzuki taps into this in the recently released, The Little Things Movie, saying that, “you only fight to protect something you love.”

Marie-France Roy, a professional snowboarder based on Vancouver Island and Whistler, used this truth as the foundation to produce the unique snowboard movie, one that blends Darcy Turenne’s beautiful cinematography with profiles of snowboarders who, because of their love of the outdoors, are making efforts to live sustainably. Without the money from major sponsors that fuels many snowboard movies, Marie-France raised nearly $30,000 on Kickstarter, which features her own riding, Gretchen Bleiler, Jeremy Jones, Tamo Campos (David Suzuki’s grandson) and more.

Marie-France, who lives much of the year on the island in a cob house she spent four years building, didn’t want the movie to come off as preachy. She knows that travelling around the globe snowboarding is not a job with a minimal environmental footprint, but she focuses on riders making a range of efforts and tries to convey the idea that being an environmentalist is not black and white; it comes down to small efforts in everyday life.

What was the most challenging part of the natural building process when you constructed your cob house?
There were a few challenging parts but for me most of them are really the best parts. I like to do things more manually and back to the roots. The challenging part is dealing with today’s construction codes and building codes; that’s like a logistical nightmare. The actual physical work part, that was a lot of time and a lot of energy, but it was never a pain, it was always so rewarding and I loved it. I think learning all the little techniques and steps was actually pretty simple because there’s a lot of information out there. I think most of all I don’t remember it as a big challenge, I remember it as an amazing experience.

What is your lifestyle like on the island?
It’s nice to be able to live from things you can grow yourself, and trust me I’m far from being perfect. My garden is great but I have a long way to go, I learn every day and it’s not like I can feed myself fully from it. But it’s fun, it’s been a dream of mine for a long time – I had a garden and chickens growing up back in Quebec, and I was really excited to live in a place where I could do that again. It is so rich and so healthy to be able to do all that stuff, I think people don’t even realize how much it balances out to spend time in nature, spend time in dirt. For me, it was all a part of a big cycle getting closer to nature, and even though it’s not perfect, our life is so filled with time inside and computers and it was just really important for me to get that balance going.

How and when did you conceive of the idea for The Little Things Movie?
That actually started while I was building the cob house when I was just stepping in mud, about three years ago. Snowboarding has been really good but I always felt guilty of using so much. Snowboarding has given me so many opportunities, so many great memories, has allowed me to travel the world doing what I love, it’s opened my mind in so many ways. It’s made me a better person; snowboarding changed my life. At the same time I want to give back, and at the same time I want the next generation to be able to do the same thing, and I also felt a bit guilty to represent more consumption through my sponsors.

I thought, to be realistic I don’t think the best thing I can do right now is quit snowboarding and go live in my cob house and try to use as little as possible. That’s something I can do later, but the best way I can make a positive impact is to use my assets, to use today’s connections and all my friends, and what snowboarding has taught me to make something bigger, to reach a bigger crowd and inspire people, instead of just changing my own lifestyle. Nobody’s perfect, everybody has an impact, but it’s just too urgent. We have to act now, we have to do the best we can even if it’s really little. It’s not going to happen overnight, but we just have to do it.