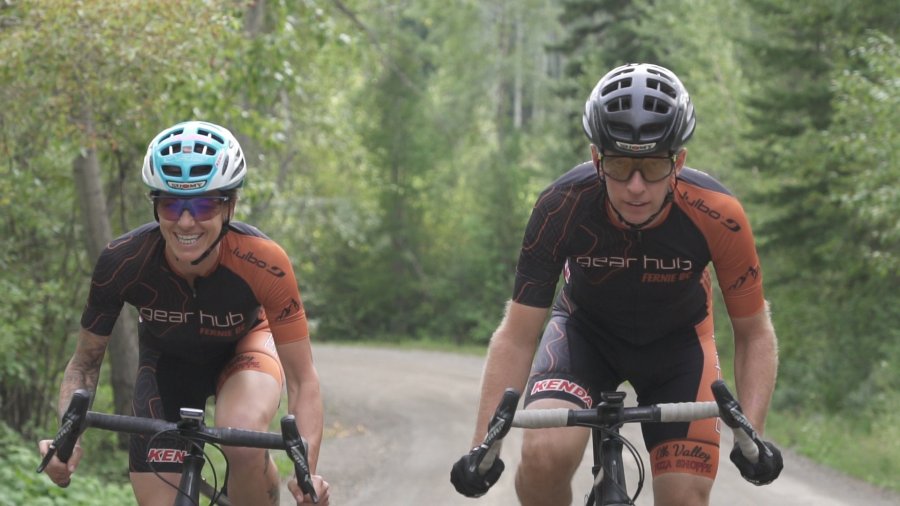 I first met Dylan Bailey and Jena Greaser at Gearhub through different filming projects. Dylan and I went out onto the trails to film a promotional video for the Fernie Enduro, a local human powered downhill race event. I first met Jena, a bike instructor where we filmed an instructional bike series in collaboration with RideTheory, a mountain bike lesson organization in town.

I only started mountain biking two years ago and it has been a whirlwind of a journey. The first trail I tackled in Fernie was Swine Flu (whoops!), which led to a couple of good cuts and bruises. But since then, I’ve started to enjoy biking even more than the winter activities. Now, before you think ‘traitor!’, keep in mind there are few activities where you learn a new set of skills, jargon and throw down more money on gear than you ever have on a car. There’s a reason people invest time, money and energy into the sport, and why the mountain biking community is so prolific in places like Fernie.

The video project with Dylan was the first time I had ever heard the word ‘Enduro.’ It begged the question - what did it mean? I soon realized there was a lot more to mountain biking than I knew, with slang like singletracks, double tracks, gravel, staged racing and the Gravel Royale.

Dylan is originally from Ontario, while Jena was born and bred in the USA. Both had visited Fernie quite a few times before committing to the move. They’ve ridden competitively since 2015 and met at the Canada Cup in 2016 on a group ride between race events. “There is a huge variety of race events - XCM, XCO, XC, Enduro, Single Track, and multi-day stage races like the Gravel Royale,” said Dylan. These staged events are typically on dirt roads or trails where you camp between stages. They both have quite the résumé from their time as competitors, between them winning Canadian and Provincial championships in their respective categories - so they know their stuff.

There is an immense roster of off-road racing events across Canada and it takes a lot of training to get to the podium level. Between the 23 - 26 August, TransRockies hosted the Gravel Royale; a 375km gravel race between Panorama and Fernie travelling through the beautiful and rugged Canadian Rockies. “In general, all of your gains are made in the off-season. As you get closer to the event you begin to take longer rides and interval timed climbs,” said Dylan. It covers four stages and over 7000m of elevation gain. “I’m not superhuman,” Jena jokingly said. “It takes time and preparation to compete at a high level. What is important is to make sure you don’t fade. A lot of athletes will go all out all season, and the last few events their fatigue will catch up to them.”

I was curious why they deviated from the tar and asphalt to gravel and dirt. “It’s the sense of adventure. You are travelling through nature and you get to go out into the woods and ride your bike which I always love to do,” Jena reminiscences. “Road racing you are often stuck with a group of riders, and you get a really bad road rash,” said Dylan. While they are fierce competitors on the trail, once the day is completed and they head to camp to rest for the next stage, everyone becomes friends, recounting the gnarly day just past. Jena ended with, “We have really found our tribe.”

So, as a newcomer into the biking scene, how can someone get started in these events? “If you haven’t done any sort of bike race before, just sign up for something small then you have a goal to work towards,” Dylan shares. We are so lucky and fortunate that there are a number of these events throughout the Kootenays. More-so locally to home is the Fernie Enduro and Gravel Grind which cater to every level of rider. So why not sign up for one of their races with a few buddies and have some friendly competition? I think I might have to next year.