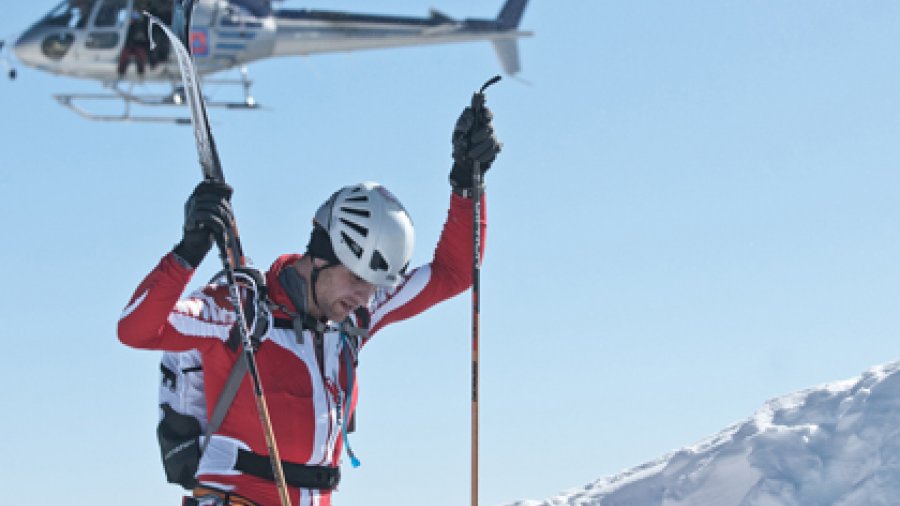 You probably have an idea of what ski touring is, or have partaken in this ever-growing winter sport. But have you heard of ski mountaineering or claut, as it’s known in Europe? Neither had I, and when I heard that James Minifie was competing nationally in this sport, a sport trying to become an Olympic event by 2018, I had to learn more.

According to the United States Ski Mountaineering Association, “A Ski Mountaineering race is a timed event that follows an established trail through challenging winter alpine terrain while passing through a series of checkpoints. Racers climb and descend under their own power using backcountry skiing equipment and techniques.” It’s a combination of telemark, alpine and backcountry skiing with mountaineering, in that racers basically ascend mountains through very technical terrain including obstacles such as rock, ice, broken glaciers, and the like, before descending. Canada has its own club, the Alpine Club of Canada, based out of Canmore, AB. This club organizes events throughout the winter, including races in Calgary, Golden, Banff, Nelson and Lake Louise. The first race this year was 180 minutes, with the individual gaining the most vertical winning… crazy.

So how did this Fernie boy who dabbled in skiing, hockey and soccer, end up on the National Ski Mountaineering Team? James began to push his endurance abilities more and more in his twenties, realizing his physical and mental abilities and competing “for fun” in mountain many challenging races. But it wasn’t until 2006 that he competed in his first mountaineering event, all because of a bet. “I was bet that I couldn’t beat the AT guys on my tele skis.” While he didn’t come first, he finished with an impressive time and it was enough to hook him. He changed to AT equipment the next year and started putting in the hours, a difficult task living in Saskatchewan at the time. “I had to train on the only hill, which was basically the garbage dump.” I’m guessing he did a lot of laps.

James went from exercising for fun and fitness to a very structured life. As he climbed the ranks in Canadian ski mountaineering he made the national team and was put onto their very outlined training program. Two years in, James is as fit as ever and as tired as ever (having just finished the World Cup circuit, including the impressive four-day, 10,0000 metres of climbing “TransRockies” of mountaineering – the Pierra Menta). James, his wife Samantha and two children currently reside in Whitehorse, but he tries to spend as much time in Fernie as possible to both train and visit his family.

While he has a few more years of training and racing ahead of him, James realizes he won’t make 2018. But he’s motivated to be involved to help the sport grow as he’s seen what funding and support can lead to. On the world scale Canadians can’t compare. “We didn’t get exposed to endurance sport that young. You see the kids in Europe, building their engines, and their bodies are just so much more efficient,” he acknowledges. He’s in awe of the kids currently growing up in Fernie, being exposed to a diverse array of mountain sports. The sky is the limit really, and James is excited to be a part of that growth in years to come.

1. What is it about competing you love? I’m not sure, I guess I always thought it was testing myself against other people, but now that I’ve matured as an athlete, it’s more about what I have to do to be the best that I can be.
2. How do you prepare/train for your events? It usually starts in the summer with a lot of mountain running, or roller skiing and biking. It then progresses along a very structured plan that lasts the entire year. The peak being the world champion week, this year we worked in a second peak to coincide with Pierra Menta.
3. What are the events you are competing in this winter? World championships, a week-long event in early February. Then we had a world cup in Italy in the Alps, and then my partner and I attempted a sprint on the Haute Route, then the Pierra Menta – the four-day stage race in France.
4. What are your main goals when competing? The big one is to do my best. I try to be really scientific with my training to hit it perfect for events. I find it satisfying after listening to your body over a long period of time, and then being able to push yourself to a level that maybe you never thought you could reach. You don’t hit it very often, but when you do it’s awesome.
5. How do you think Fernie's recreational side has changed since you've lived here? It’s a complete 180. We were never exposed to endurance sports growing up, but now you come to town and you see kids ski touring and running with their parents. Six years ago I also never thought I would se my dad getting so into mountain biking, and am happily surprised seeing people I knew growing up out and enjoying all of these things as well.