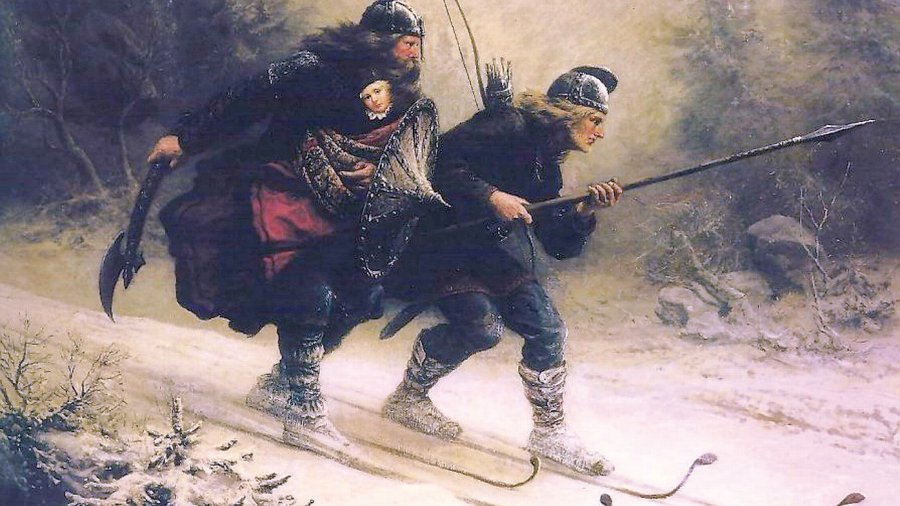 Cross-country skiing is the oldest form of skiing, developed in Scandinavia as a way to travel cross-country over snow to hunt and gather wood. While skiing began as a utilitarian means of transport, it has evolved into a world-wide recreational activity and sport. One of the largest cross-country skiing events in the world is the Birkebeinerrennet, a 55-kilometer race in Norway. The birth of the race in 1932 was inspired by the Birkebeiners (the birch legs), who were a faction in the Norwegian civil war in 1200. The Birkebeiners were said to have been so poor that all they had was the bark of birch trees to wear on their legs and feet. When the Birkebeiner leader died in 1204 the rival faction saw a dangerous rival in the Birkebeiner leader’s son, Prince Haakon. In an effort to protect the Prince, two Birkebeiner warriors took the two-year-old boy on a nine-day journey across 7000-foot mountains in sub-zero temperatures from Lillehammer to Trondheim. Prince Haakon went on to become King and united Norway after 1,000 years of civil war.

Today the Birkebeinerrennet is skied between Rena and Lillehammer and the race requires that each participant wear a backpack with a minimum weight of 7.7 pounds to represent the young Prince Haakon. American and Canadian Birkebeiner events held in Wisconsin and Edmonton attract thousand of skiers annually to commemorate the journey of the Birkebeiners.

The classical cross-country movement was the technique of choice for the Birkebeiners and the only technique allowed in the Canadian Birkebeiner. Classic skiing involves having wax or some sort of grip on your skis to help push off to propel you down the trail. Classic skiing has three primary techniques, each of which is used on different terrain and act as different gears in the skiing transmission. Diagonal Stride is the first gear in the classical transmission and despite what many think, it is primarily used when climbing steeper hills. Kick Double Pole is the second gear in the transmission, and is used on gradual uphills. Double Poling is the third gear and, unfortunately, is not utilized enough by most recreational skiers. Double poling should be used on gradual uphill and downhill terrain where kick double pole and diagonal stride will over-rev the engine.

The first skiers only used one pole or spear in addition to the skis but today we use two poles so you should take advantage of them and add more double poling to your skiing. Double poling uses the upper-body to apply power onto the poles to move the skier down the trail. The key to double poling is in the quick application of power to the poles, which results from the body weight falling on top of the poles as the core contracts in a crunching motion.

Some things to think about when double poling:

A great drill to practice at the start of any ski session is called Locked ‘n Loaded. The purpose of the drill is to feel the proper initiation of power, feel the engagement of the core, and feel the body weight falling forward from the ankles. Envision that your upper body is fixed in cement. The only flex point is in the core and in a slight bend in the knees. Keeping your hands high and arms locked at 90 degrees you will be forced to rely on the core crunching onto the poles to move the skis forward. Practicing this even for the first five minutes of your ski will ensure you are engaging your core properly and reinforce the correct body position.

Next time you go out skiing try adding in some double poling on flat or slight uphills. You will improve your efficiency by going faster and using less energy. And as you are climbing that last steep hill on your ski, think of the Birkebeiners with their birch bark leggings, one pole and wooden skis carrying Prince Haakon through the mountains to safety.