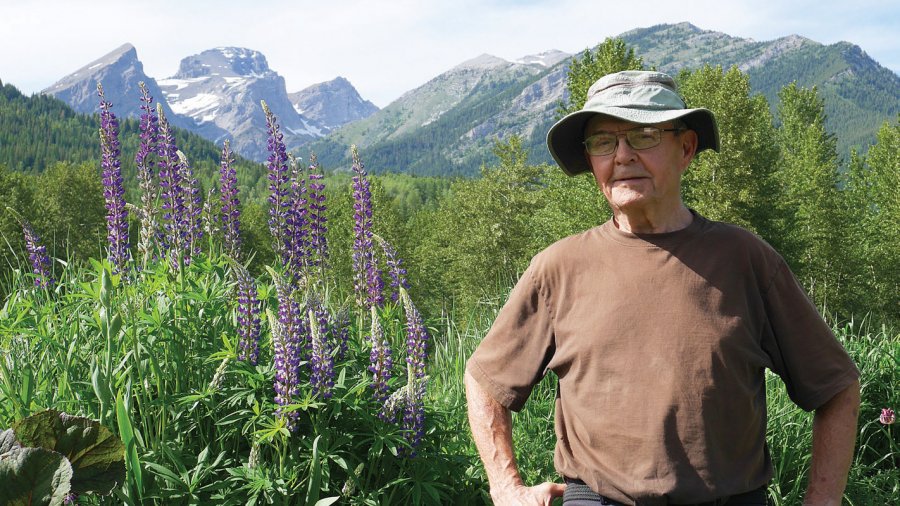 If I were a bird, I'd be a bird in Ralph Stadnichuk's garden. I'd choose the birdhouse near the raspberry patch, and as the sun lapsed west across the squash, carrots and kohlrabi, I'd sing morning songs and dance between the yellow Iceland poppies.

I'm no bird, though, so I settle for admiring. I walk past Ralph's garden along the Annex Park every day. Purple lupins, fuchsia peonies, rhubarb in the spring, a rainbow of tall gladiolus in mid-summer. Cement garden gnomes hide slight in the grass. His garden occupies his front and back yard, and the embankment of the dike; its subtle fragrances spice the crisp morning air.

Ralph's garden is a gardener's dream; well-established, metamorphic, an enchanted yard full of za za zoo. And so, one sunny afternoon in June I join Ralph for homemade iced tea under the shade of an umbrella to talk worms and dirt. To talk about how I can get my garden to look like his.

Ralph and his wife Margaret moved to Fernie in 1972 from the flat prairies of Saskatchewan. The Annex neighbourhood backed onto thick bush back then, with no flood dike nor manicured pathways— just woods. When the dike was built, Ralph tossed various seeds into the ground over his fence line.

“I got tired of looking at the dandelions.”

Over the years creeping thyme spread along the garden pathways, peonies flowered, poppies reseeded, and today Ralph and Margaret's garden is home to at least 20 different vegetables and fruits, and more than 30 species of flowers and plants. There's tomatoes in barrels, pumpkins in bins, cabbage and cauliflower, an old soup pot for a planter. Ralph can't say for sure how many hours he spends out here.

“I'm still on the right side of the ground, might as well garden.”

Ralph tells me about his elaborate composting system. He grinds veggie scraps and collects leaves from his “wonderful neighbours” to make a rich, worm-infested soil. My mom, who lives just around the corner from Ralph and Margaret, is one such neighbour. She's from Saskatchewan, too; he tells me I laugh like her.

When it's time to harvest, the pair take any remaining vegetables and fruits they can't use to the Lutheran Church uptown.

“You were baptised in that church,” he says, smiling. I sip my iced tea, and though I don't say it aloud, I'm flooded with a tenderness for this man I know nothing about, a man in a bucket hat who lives in his garden, and who seems to know a whole lot about me.

He tours me through the paths of his garden, past a faded painted rock in the dirt; Grama's garden, Grampa's weeds, it reads. We laugh. Ralph digs through a compost bin and pulls out dark, rich soil, his hard work tangible between his aged hands. He points to each flower varietal with conviction: Shirley Double poppies, Primrose, Sweet Williams.

When we reach the back fence near the Raspberry patch I notice the birdhouses—from one flies a barn swallow, its baby left inside to peer out. The baby bird watches us, then tucks out of sight. When we finish the garden tour, Ralph assures me humbly he really has no idea what he's doing in his garden.

“If you think you've got it figured out, think again,” he says. It's the best advice he can give new gardeners, and invites me back to collect flowers for my own garden next week.

I go home and dig in the dirt, pull weeds and wonder at the creature eating my kale. Suddenly, though, gardening isn't about how large my strawberries grow nor how many carrots I harvest in the fall. Gardening is just about gardening.

If I were a bird.