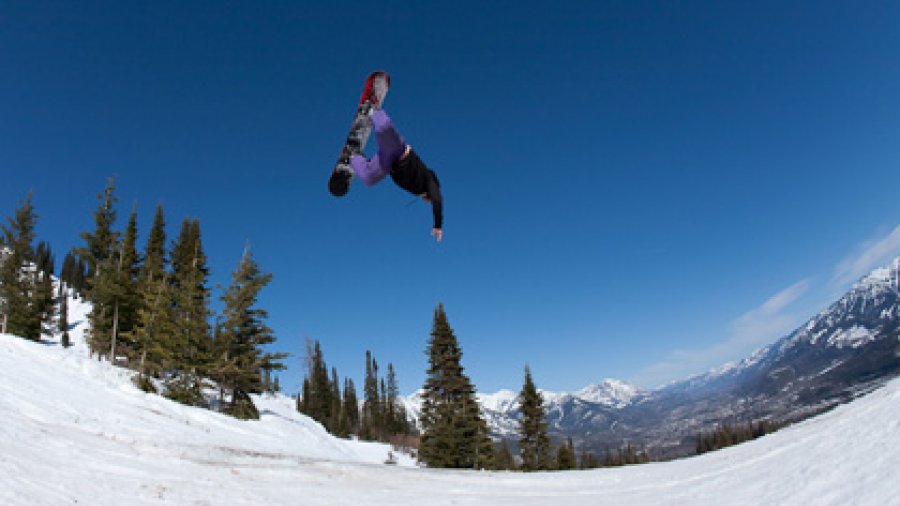 January drops like a bang, in a flurry of tight waistbands, New Year’s resolutions and snow. It’s a month where all those things set-aside in December in favour of festive feasting and general ridiculousness, are now lined up waiting for your attention. But of course, there’s fresh snowy, crowd-less skiing to be done.

Two Fernie residents who long for this time of year are presently preparing mentally and physically for a long, action-packed winter ahead. The sport of Freeride skiing and snowboarding is challenging to say the least. Ben Ogilvie and Jamie Rizzuto however don’t let anything get in the way of their clear passion and talent for the sport.

Ben Ogilvie is one of Fernie’s finest Freeskiers. His parents introduced him to skiing at the age of three; however, it wasn’t until he was 12 when his family started visiting Fernie that things changed. Joining the Ski School Team in 2000 gave Ben the chance to train with coaches who were the first to help him get to where he is today, along with friend Aaron Schmidt who inspired him to get involved with Freeskiing World Tour events.

Unlike many Fernie residents, who arrive for a season and stay for as good as ever, Fernie was always on Ben’s agenda. “When I was 14 years old I knew I was coming here.” And now, 12 years later the snow, the people and lifelong buddies continue to keep him here, when he’s not travelling the world competing of course.

This year will certainly rack up some air miles, as Ben takes part in the Swatch Freeride World Tour. He’ll kick things off in Revelstoke January 7, onto Courmayeur and Mt. Blanc January 19, Chamonix January 26, and then Kirkwood February 27. But it’s not all fun and games, and off snow training plays a large part. Taking Paul Attalla’s Core Ball Class at Evolution Fitness as well as pounding the trails keeps him in shape.

Affording such a season is not easy. Ben is grateful to his sponsors “the Faction Collective, Fernie Alpine Resort, Spy Optics and POW Gloves.” Thanks to them and his talents, Ben’s career highlight is his third place at 2012 Freeskiing World Tour Qualifier event in Moonlight Basin, Montana, but up there with that finish “is this one particular pow day in January when I got to ski the deepest snow ever…”

Jamie Rizzuto’s on-snow life tells a similar tale. He is also hitting the Swatch Freeride World Tour, and rather proudly, as “out of 16 riders in the world making the cut I will be the only Canadian snowboarder… for us this is the big time!”

He was the proud owner of his first snowboard at age ten whilst already “an avid skateboarder and skier,” says Jamie. Now, five years since his arrival in Fernie, Jamie gives thanks to the “deep talent pool of amazing skiers and snowboarders at Fernie Alpine Resort. Getting to ride with a variety of gifted athletes has helped my skills grow immensely.” Not to mention being another Core Ball Class enthusiast to assist with off-snow development.

Jamie’s 2013 plans are similar to Ben’s, and if past results are anything to go by, Jamie will be brewing up a storm. 2012 saw him take second place overall in The North Face Masters Tour. Jamie is grateful to his sponsors – The North Face, Lib Technologies, Fernie Alpine Resort, Adam and Paul at Commit Snow and Skate, Pow Gloves, Union as well as Paul Attalla and Craig McKay from Graceland Builders, but as he says, “it requires a lot more than just quality gear to compete. It’s a big expense to travel to each event, especially having four out of six comps overseas.”

It’s a given that enjoying the Fernie lifestyle is a pricey business for anyone, but for Ben and Jamie even more so. Fernie is not only a year-round paradise, but also an endless support system. Both guys would like to thank Jenn Johnson, who organized their December Fernie Pub Crawl to help raise funds to get them to the start gate. From there it’s up to them to do their stuff and make Fernie proud and something tells me they’ll have no problem. Good luck for a great 2013 season!