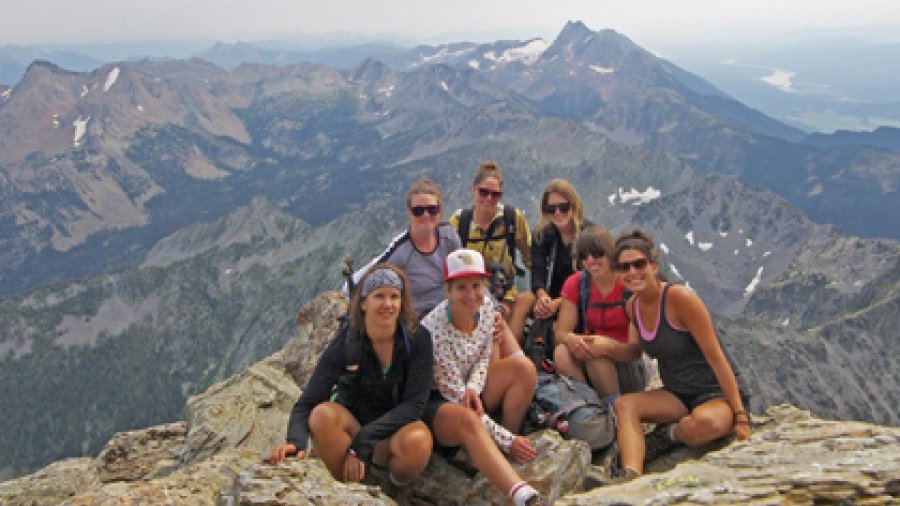 I’m standing at 9,336 feet above sea level for the first time ever, atop the tallest peak to dominate the Southern Rockies skyline. I’m a little shocked at how I even got here, standing on no more than a small gathering of rocks at the summit and surrounded by several hundred feet of nothing but steep cliff.

In the company of six very good friends, I have just conquered Fisher Peak.

Fisher Peak – which had until this moment remained on an unattainable pedestal – is perhaps one of the most sought-after mountains to climb in the East Kootenays. I’ve heard stories of its steepness; the trail is relentless, the scree slope scramble makes you want to turn back, the summit is so precipitous that only ten people can stand at the top.

And some who’ve climbed the mountain before say, “I’m never doing it again.”

And so, after getting a group of girlfriends to commit to the climb we set out at 5:30 am from Fernie to the Fisher Peak trail.

Four kilometres in on Mause Creek Rd. we encounter a roadblock, literally. Half of the road has been washed out making the drive to the trailhead impossible. Prepared for this, we pull our bikes from the truck and push them up the road, knowing that on the descent these bikes will be a godsend.

We reach the trailhead and the climb begins through steep grade alpine alongside a fast-moving creek. As we reach the subalpine we cross an old rock fall zone and can hear the creek rumbling under the rocks beneath our feet.

In the next few hours we will ascend more than 4,400 vertical feet over eight kilometres.

Before long we’ve reached the lower part of the bowl, blanketed in purple wildflowers and emerald green grass. We sit next to a bubbling brook and then continue past a waterfall and alongside serene pools left by the melting snow. Steep, vertical spires of black rock tower above us and a gentle meadow lies ahead.

Even further is our route – at the back of the bowl a steep scree (loose rock) passage to which we have to ascend. We meander our way through fallen rock to the slope and then the real fun begins.

Trying to find the correct route we mountain goat up the slope, sliding on scree and at the same time trying to hug the mountain with our bodies. The hiking poles are of no use to us and we wind up using our hands.

At one point the scree is frightening and – try though we may – fear manifests itself. It’s times like these that some people turn to words of encouragement.

After reaching the ridge we head north up to the summit. Using only a few yellow markers and cairns (man-made rock piles), we are bouldering more than we are hiking up the 900-foot scramble.

Before long we are at the last pitch, the most technical. There is a bolt in the rock meant to help climbers and once past this last obstruction we will reach the summit. For a brief moment panic engulfs me; there is only one way around this and if I slip it’s down the mountain I go.

After gathering my nerves I find a good hold and pull myself up the rock. A couple of the girls are already on the summit and as I approach they whoop and holler. We have just summitted Fisher Peak.

We eat lunch and sign the guest book. Crystal blue Nichols Lake sits far below us. We can see the Dibble glacier on the backside of the Steeples. There are no words to describe what it is like to be at 9,336 feet above sea level with friends.

And although we aren’t sure how to get down, we soon begin our descent.

Long and tireless though it may be, hiking Fisher Peak with some seriously determined women has officially become the highlight of my summer… even if I can’t walk for the next five days.

If you are considering hiking Fisher Peak go prepared and know that it is an incredibly challenging mountain, but an adventure nonetheless. A big thanks to Chrissy Tomney, Ali Schroeder, Nicky Benzy, Amanda Foreman, Jaclyn Galbraith and Brook Braconnier for joining me.