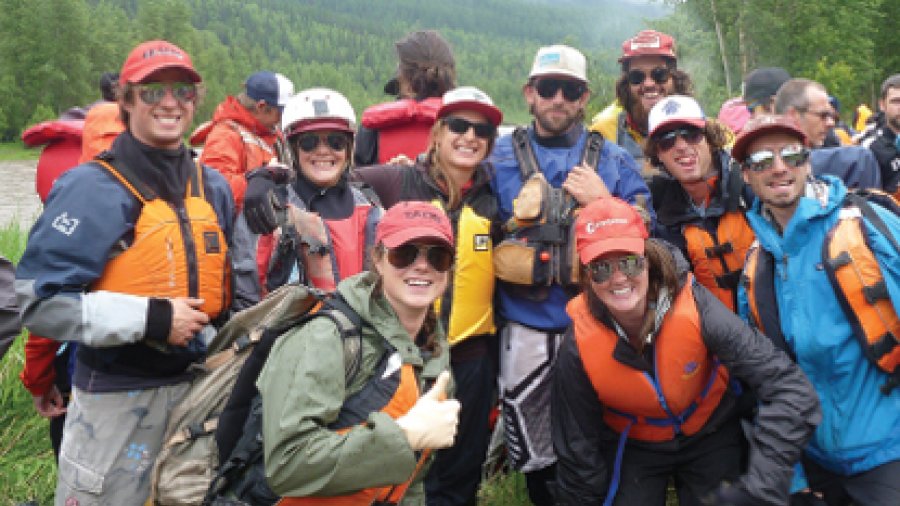 Just think of the gold rock.

Or at least, that’s what my friend Mel Makepeace says to motivate our raft crew as we saddle up for the Annual Raft Race on the Elk River, held by Canyon Raft Company.

“Just remember, when your arms are getting tired, to think of that gold rock,” she says.

The raft race – a Fernie tradition for the past 15 years – began as a part of a weekend paddle fest in 1999. The event quickly fizzled out, says owner Lynn Muller, but the raft-racing portion of the event was too good to quit. What initially involved only two rafts that year has since grown to a 16-raft race.

And teams now compete for river rocks painted in gold, labeled “best-dressed” and “most sportsmanlike.” It’s practically a holiday in town.

“This is my second favourite day after Halloween,” says Mel. She’s only a little excited.

The race begins after everyone piles into three yellow and white school buses and out to the start area. On the highway our bus driver instructs us to open the bus windows and mimic paddling as we pass one of the slower busses at lightening speed.

When we arrive, there is a leisurely float from the east end of Dicken Road on the Elk to just above the East Fernie Bridge. Teams practice strategies and take in the scenic float before reaching the starting point.

Soon the 16 rafts are lined up along the shoreline with one paddler from each boat standing on the round-rocked riverbed. Our friend Mikey is the runner and as the race begins he charges along the rocks and hurdles himself into the boat.

We are fourth to leave the shore, but with some serious paddling we bypass the three rafts and in no time are in the lead of the race.

Donned in heart-patterned rain boots and a seriously flashy yellow lifejacket I wore when I was nine, I paddle.

And then my arms turn to Jell-O. The race portion is less than ten minutes to the finish line at the West Fernie Bridge, but my arms are so tired that my friend Sophia and I have to switch sides multiple times just so we can continue on.

Everyone chants, “Stroke, stroke” in an attempt to maintain unison between each paddler. People cheer from the shoreline and soon Mow & Snow’s raft attempts to pass us.

Our guide, Jared Marshall, senses our distress and exhaustion and provides us with some words of encouragement.

“Quit looking at who’s behind us because no one is in front of us!”

It’s just the push some of us need to keep paddling, despite the burning of our arms.

Nearing the finish line we push a little harder and Ben, at the front of the raft, yells out in a burly, manly voice, “Pain is only temporary, but victory is forever.”

It reminds me of Mel Gibson’s speech prior to the great battle he fights in the movie Braveheart; incredibly cliché but I laugh out loud. When we approach the bridge we all begin to cheer.

Following the race and a hot shower (we are all a little cold) all of the rafters meet at The Bridge Bistro for food, drinks and prizes. Lynn and Blair – megaphone in hand – announce the winners, the losers, the best dressed and the most sportsmanlike.

Many sponsors including Happy Cow, Commit, Big Bang Bagels, Board Stiff, Straight Line and Elevation provide some great prizes, but the best prize is that painted rock.

Freshies Coffee team Three Lucky Beavers wins their Best Dressed rock for the fourth time in a row. Their victory rocks are piled in the front window at the coffee shop.

And then there’s the fact that we are surrounded by good friends and my cheeks are tired from smiling. I’m starting to understand why the Raft Race is one of Mel’s favourite days of the year.

The Raft Race takes place every June. Money raised goes towards the new Fernie Whitewater Park on the Elk River. For more information check out http://fernie.com/whitewatermark/.