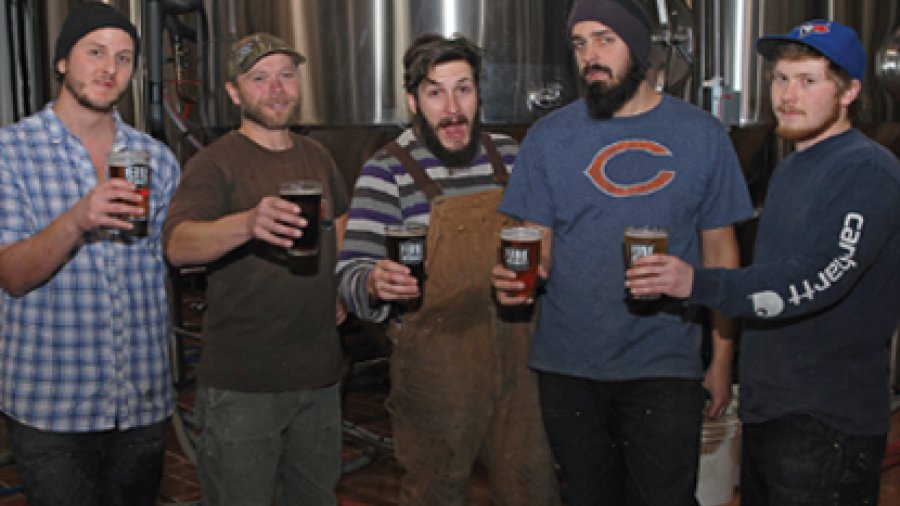 There’s not much I know about beer other than the obvious. It’s bubbly. It tastes delightful after a long day of snowboarding. It sometimes makes me feel a little tingly, even a little giddy.

But when it comes to knowing how it’s made, I’m a little clueless.

So here I am at 7am, the smell of yeast radiating through the air, prepared to spend the entire day as a brewer with Fernie Brewing Co.

I follow brewer Pauly Roberts – clad in Carhartt coveralls—as he walks me through the brewery, first to the mill room where bags of malt (barley, grain) sit stacked, awaiting the brewing process. Roughly 417 kg of malt and 1000 litres of water go into making the day’s brew – the Lone Wolf IPA.

As Pauly ads the malt to the tank, the mashing process begins. For 90 minutes the wort mixes with hot water and the conversion from starches to sugars occurs. This is just one of many steps to making a delicious brew.

Pauly monitors the tank and temperatures as he tells me how he became a brewer.

“I was looking for a job that could keep me [in Fernie],” he says. “This is a wicked family-run business and I knew it was a growing industry.”

Pauly completed an online course and while working at FBC full time, mastered the art of brewing. I don’t say it, but his ease around the brewery is so apparent that I’m left thoroughly impressed.

Following 90 minutes of rest after mashing and 15 minutes of recirculating the wort (the remaining liquid infusion of malt) the brew is passed to the Kettle and begins to boil. Over the next 90 minutes we add several different types of hops, building bitterness and aroma to the brew.

Each brew has a different recipe and although it might as will be written in Wingdings, Pauly knows exactly what he’s doing, like a chef in his own kitchen.

Meanwhile, I’m left to empty the remaining mash into large bins to be delivered to local farmer’s cattle. I take a handful for myself; it’s sweet, and tastes a bit like oatmeal.

Pauly drags a hose from one tank to another to move a couple hundred litres of yeast (cropped and grown in-house) into the future Lone Wolf IPA tank.

“Most of your day is fighting with clamps and hoses,” he says, as he moves hoses from one stainless steal tank to another.

When asked what he likes the most about brewing, the beer isn’t the only answer.

“I like making something people enjoy every day,” he says. “…to be recognized as a part of FBC. And people that like beer appreciate what we’re doing.”

The brewery has come a long was since it initially began brewing in 2003. Back then, its facility was a farm shed outside town. In the last year alone FBC has introduced four new fermenters and increased production by 60 per cent.

It is one of 57 microbreweries across the province and has products in-fridge and on tap from Victoria to Edmonton. Thanks to brewmasters Gord Demaniuk and Paul Graham – among others – there really is a variety of tastes for every type of taste bud.

Claiming BC Beer Awards for the Big Caboose red ale and What the Huck fruit ale, there’s no denying that FBC’s craft beer is quite simply, good beer.

And the brewery is very community oriented. For example, when the nearby Elk River flooded earlier this spring, FBC – and the brewers themselves – were there, providing liquid encouragement for volunteer sandbaggers.

Ninety minutes later, Pauly and I are ready for the wort chiller, rapidly cooling the wort so that it is ready for fermentation (five to seven days). As the wort cools, it passes through the hose and mixes with the yeast. After two weeks of maturation, filtration and carbonation occurs.

And then you’ve got yourself a fine, fresh brew.

At the end of day we sit down to a pint of Ol’ Willy Wit. Bubbly? Yes. Tingly? Yes. Delicious after a long day working at the brewery? Absolutely.