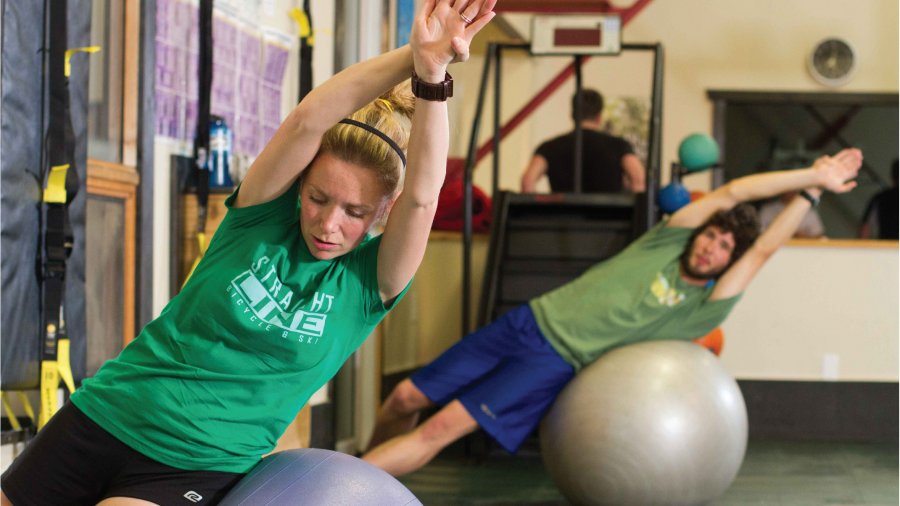 In this new segment I’ll be exploring some of Fernie’s other, less obvious and maybe lesser-known fitness activities. Those of you looking to try something new, or trying to pass the time through these long dark nights – this is for you. Each month I’ll be sacrificing myself all in the name of research.

This month I put my core muscles to work, well lack of core muscles. As an avid bike rider and racer in summer and alpine and Nordic skier through winter I really should increase my core strength. Not only will it have a positive affect on performance, it can also reduce the risk of taking time off due to injuries. Increasing strength through our core can take pressure off other more susceptible parts of our bodies, creating a more balanced and powerful body.

I hit up three different classes this month, all with their own unique personality.

First up was Core Yoga with Katie Joyce at SOAR. Apart from some too little, too late stretching after skiing I’ve never really taken part in a yoga class. Katie promised I’d be able to keep up and wouldn’t be too embarrassed. Her class was great, the hour-long early morning class found muscles I never knew I had. I really liked the way Katie increased the difficulty of each move as the class went on. The class focused on slow, thoughtful movements, holding form and moving with delicacy. The class concluded with slower more relaxation style move, which was a great way to finish. I may not be blessed in this area but managed to be somewhat successful. Regardless of experience, everyone would benefit from Katie’s class. While some poses were challenging, nothing was too advanced.

The second class I tried was Francesca’s Core Class at Essential. By this time I had a few yoga classes to my name and felt a little more confident. Francesca’s class was quicker paced with harder poses. Less about movement and way more finding those muscles deep in our core area. It didn’t take long for me to get my sweat on. Some of the sequences were really tough. Each one held just long enough to really feel it but not too long that I would collapse on my yoga mat, almost like Francesca had done one or two classes before! This class is certainly not the type of class you can just rock up to with zero core, I’d strongly advise to try some easier classes before jumping in. However if you feel you have a decent base then this class will really help you discover muscles you may have previously missed. With the guidance of Francesca, this is a great class for those looking to really improve and get strong.

My final class and certainly the one that I was most intimidated by was Paul Attalla’s Hard Core Ball Class at Evolution. Paul gave me a friendly warning about his class, which had me curious about what was to follow. It was 110% from the first second. Paul’s energy was contagious, as was that of the other super humans in the room. He jumps through a variety of moves, reps and stretches; the furious pace of the class was what made it so challenging. At first it was difficult to keep up, but I quickly got into the rhythm. Even though each set of reps was challenging, there was an easier option that I was only more than willing to use! After the first 45 minutes the class moved into a circle with everyone kneeling on their ball. The group played an intense game of what can only be described as “hot potato” while balancing on a ball. The idea is to utilize all core muscles and coordination while fatigued, replicating times when you’re forced into making a move while fatigued in your sport. Maybe it’s a Bode style recovery whilst skiing or saving a front wheel washout at the end of a long descent. A base fitness level and willingness to push yourself will help with this class.

Next month I’m doing some body maintenance, going in search of ways to keep our bodies in top condition so we can make the most of our amazing winter.