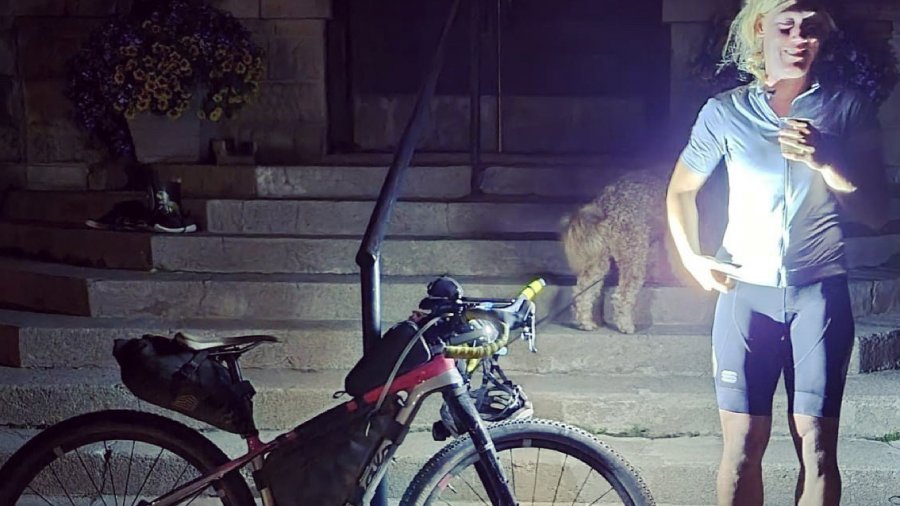 Meaghan on the steps at City Hall in Fernie, BC enjoying a well-deserved refreshement to celebrate her finish!

Six years ago, Lennard Pretorius had an idea. His wife was competing in the Fernie 3 mountain bike race in Fernie, BC and he thought... maybe I can ride there! He got out his backroad maps, and created an epic and challenging route from Merrit to Fernie which he aptly named the BC Epic 1000. When the route was finalized, he put it out to social media and in total 15 individuals joined him on June 25, 2016. Seven finished the ride, including Fernie's own Franck Gimard.

Fast forward to 2021, with the biggest start list the event has ever seen and a heat wave hitting BC, the BC Epic was truly going to be the most epic to date.

You betcha, I caught up with this warrior to learn more abour her experience, her fascination with self-supported events, and much more.

K. You have an extensive background in these long, self-supported rides. What initially attracted you to them?
M. I started bike commuting while I was completing my undergrad. Almost immediately, I saw its potential for travel, and planned a big bike tour down the Pacific Coast with my sister as a graduation trip. I loved it: witnessing gorgeous scenery, meeting interesting people, and getting from A to B on your own strength and stamina. My first competitive event wasn’t until 2017 when I undertook the Trans Am Bike Race. I had done several long tours, but the idea of competing against others sparked my interest. I enjoy the challenge of riding far and fast, and the adventures you encounter along the way.

K. What has been your favourite of these challenges?
M. The NorthCape4000! The NorthCape4000 is a self-supported bike race from Italy to the most northern road in Europe in NorthCape, Norway. I competed in this event in 2019 and absolutely loved it. I raced hard, and was able to compete at the front end of the pack, eventually finishing 5th overall and first female. Moving through Europe and experiencing the landscape change so quickly from the Alps to rural French villages to majestic Norweigen fjords, was incredible. The last thousand kilometres of the race are north of the Arctic Circle, which means long days in the land of the midnight sun - absolutely stunning.

K. How did you hear about the BC Epic?
M. I live in Kelowna, not far from where the route passed through on the Kettle Valley Railway. After being unable to travel to the European events I’d signed up for (or having them be cancelled) I was on the lookout for something close to home. The BC Epic is an off-road adventure, and I only own road and time trial bikes. So after I decided that I wanted to do it in March, the biggest challenge was finding an appropriate off-road bike and learning how to ride it. I call myself a “Road Princess” - I’m not used to getting dirty, riding rough surfaces, or traversing creeks. But over the past few months I’ve gotten better, and learned that exploring the trails and forest service roads is a hugely rewarding way to travel. It’s more remote, and therefore you have to more self-sufficient, and comfortable being alone in the backcountry.

K. What was the toughest part of this race?
M. The heatwave, no question about that. When I heard that temperatures were going to soar into the 40s I initially panicked. Then I sat down, opened up my planning document, and started brainstorming ways to cope: ice, a sun hat, sun sleeves, more night riding, salt pills, electrolytes, ice socks (nylon pantyhose filled with ice and stuffed down the back of your jersey) were all strategies I employed to stay cool out there. I also listened to my body, and took care to avoid getting into the “red zone” where it would be difficult to recover from.

K. You smashed the women's record on this course and came so close to the overall record - what was your strategy and how did you maintain that pace?
M. I went into the race with a number of goals: have fun, stay safe, and break the women’s FKT (fastest known time). I didn’t want to put too much pressure on myself, so I decided to wait until I got out on the course before I really committed to my pace. Once I got out there I found myself riding at the front of the pack from Merritt to Princeton, and felt strong. So I decided to go for it: lean into my competitive side and see what happened. In general, my strategy was to stay on the bike, keep my breaks short, and avoid overheating. I stopped exclusively at gas stations so that I didn’t have to wait for my food. I also purchased those big bags of ice to help cool myself down: I put ice in my water reservoir, down my back in ice socks, and stuffed it in my sun sleeves. I rode through the nights to make the most of the cooler temperatures, stopping for a few short naps (about 2 hours 40 minutes in total throughout the race). When I realized that I’d gained a lead on the others, I started competing to beat the times of previous race winners.

K. Tell us what you think of Fernie! Did you bring your mountain bike?
M. Fernie is a gem, and I'm stoked that I was able to spend a couple days recovering here. Everyone seems super friendly and outdoorsy and I think we'd all get along great. My dad and I (and Sadie the Whoodle) stayed at a pretty and quiet campsite at Mount Fernie Provincial Park and found a spot to cool down in the river to beat the heat. We enjoyed a great pub meal and celebratory beer on the shady patio at the Fernie Hotel & Pub. No, I didn't bring a mountain bike - but I guess that means I’ll have to come back!

Congratulations, Meaghan. It was great to meet you and to follow along your BC Epic journey. We'll be sure to tune in to your next adventure, and look forward to showing you around the bike trails in Fernie when you're here next!

PS. I just had to check, as a Finnish citizen and because with that last name and her obvious grit... Meaghan's dad is half Finnish! She definitely embodies sisu - "a Finnish concept described as stoic determination, tenacity of purpose, grit, bravery, resilience and hardiness!"

PPS. Did you know, Fernie's own Lucy Eykamp came in second, with a time of four days, ten hours and 53 minutes?! Congrats, Lucy! We are so proud of you!