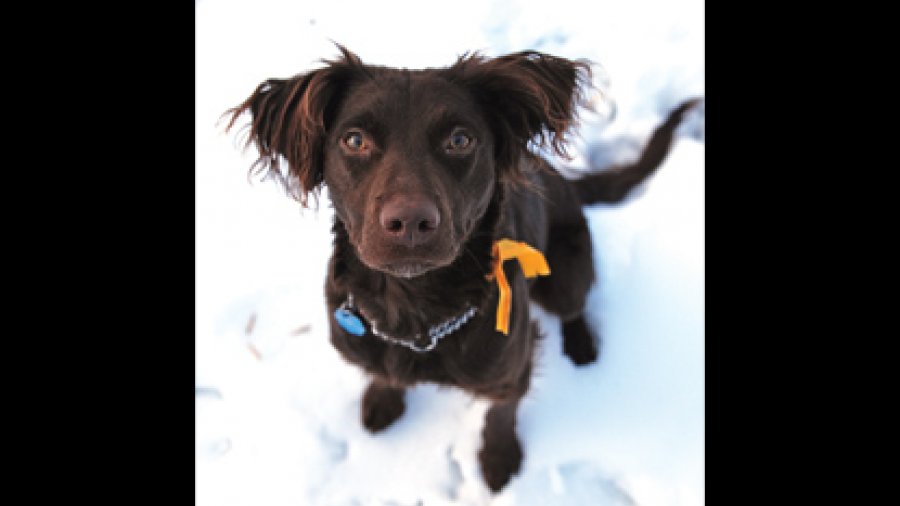 It was definitely the ears. Fluffy and crimpy, as if he had just spent an afternoon at the salon getting a 1980s hairdo. That was what attracted me to Brady.

That, and his yellow eyes that pierced right to my heart.

Brady is my dog and he is a rescue.

Last September Ben and I decided to adopt a dog. In actuality, I decided and he supported me for the love of all that is good and sane.

I drove to the Tobacco Valley Animal Shelter in Eureka, Mt., where Brady and other adorable, love-seeking dogs and cats sat waiting for their perfect owners. I signed adoption papers and, with Brady in the back seat, drove home feeling quite proud.

What I didn’t anticipate in all of the excitement was that Brady, who was dumped on the doorsteps of the shelter in a cardboard box, had a certain behaviour that was yet to emerge.

When Ben arrived home that night Brady greeted him and then growled, snarled and lunged at Ben’s pant legs. What I had imagined would be a happy welcoming for our new dog became a night riddled with anxiety.

After a visit from a fellow rescue dog owner and religiously referring to Cesar Millan’s The Dog Whisperer, we concluded that Brady had fear aggression. It’s likely that someone beat him prior to surrendering him to the shelter, or at the very least neglected and isolated him.

Our first weeks together were both rewarding and exhausting. Brady is very obedient and learned to sit, lie down and shake a paw. He ran with me through the leaves in the mornings and loved going for bike rides.

However, despite our positive reinforcement, his fear towards people was always there. And try as we might to deny its existence the fear continually resurfaced.

And then there was that week in December when Brady lunged and nipped at four people (including Ben) on four separate occasions. He ripped a man’s jeans while I was out walking him one night.

I apologized profusely to the man and then sobbed on the sidewalk in the snow. In that moment I felt entirely defeated and seriously considered taking him back.

Brady looked at me with confused eyes before licking my hand. He could feel my energy and my frustration.

Soon afterwards, I realized something.

My naiveté was not in adopting a dog. My naiveté was in my confidence to control my emotions so that I could rehabilitate the dog. The energy I had intended to convey—calm and assertive—and the energy I was actually conveying were very different.

Cesar Millan’s belief is that a dog’s energy is directly affected by human energy. It was then that Brady taught me a little something about myself.

I consider myself to be quite rational, but asking me to remain composed in a stressful situation is like asking a goat to recite a Shakespearean sonnet in Mandarin.

I was beating myself up for a behaviour I did not create. I was angry at the dog, at myself and at life in general. This sucked.

But after talking with the amazing staff at Barkside Pets and a session with dog expert George Stambulic, we concluded that with a little time and energy we could do this.

And so we have, using every resource available. I'm learning to be the Alpha of our family pack. I’ve biked in the early morning hours wearing goggles during a snowy blizzard because a tired dog is a happy dog and a happy dog is a happy me.

And on New Years Eve we had friends over and Brady did not snarl, growl or bite any of them. However miniscule this seems, it was actually a huge victory.

On our off-leash dog walks Brady prances through the woods just as a dog should. He plays with other dogs and when he runs to me for a pat on the head he brings me honest to goodness joy.

It is going to take time and I need to be calm. Maybe I’ll try yoga. The downward dog seems fitting.

Brady is my dog. His ears are cute and he may have some problems, but every little thing is going to be alright.

If you see Brady in town, you’ll notice he wears a yellow ribbon. Check out theyellowdogproject.com and remember to communicate with any dog owner before approaching a dog.