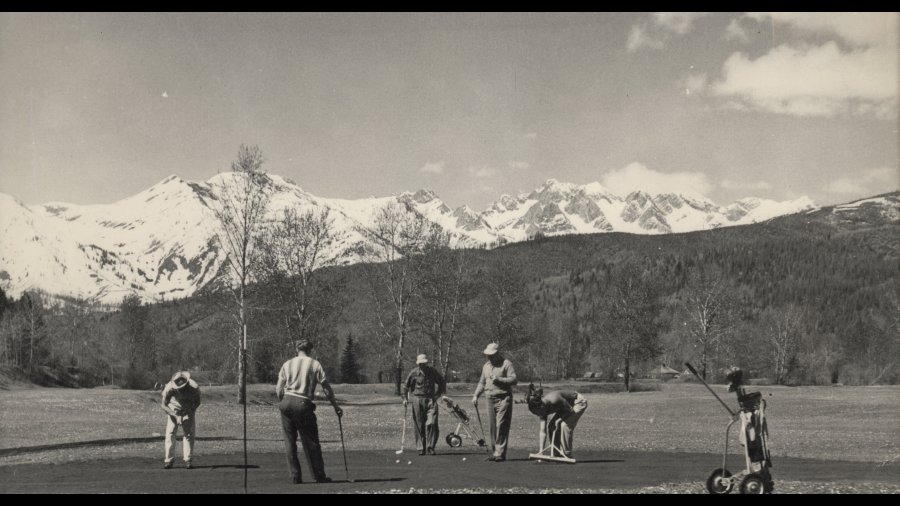 Fernie Golf Club has been an iconic amenity in the region for both residents and visitors since 1918 – marking 100 years this summer. Known for its incredible views, mountain setting and playability, this course has something to offer all players. A par 70 course playing 6,556 yards long from the back tees, the Fernie Golf Club is rated in the top 25 of BC’s courses.

Originally, the Fernie Golf Club was located at Prentice Park, where today the youth enjoy playing soccer. This land, owned by the Crow’s Nest Pass Coal Company, was provided for the first few holes. Early success was in large part due to the hard work and dedication of the Club’s volunteer members, much like it is today.

By 1921, as interest and members increased so did the number of wholes. Nine additional wholes were developed, and a reclaimed sawmill became the first clubhouse located where the golf cart house currently sits. Grass fairways were maintained with a horse-drawn roller, and the greens made from mixes of sand, sawdust, and oil collected from local garages. The Club had a greens keeper, who received $100 per year and lived rent-free in the clubhouse.

In 1928, the Club joined forces with the tennis club and was renamed the Fernie Golf and Country Club. This same year, the Ladies Club joined the organization.

After a rough patch financially from the 1930s to the 1950s, the club saw extensive upgrades starting in 1968 with the construction and planting of new grass greens, piping for underground sprinkling systems, realigning holes and in 1972, a new clubhouse that included a pro shop and maintenance building, built at the end of 2nd Ave where the Bright Beginnings Preschool currently resides.

Having an 18-hole course was always a dream for the club and its members. With the help of local businesses, government grants and a bank loan, this was made possible in 1986! Golfers were now able to experience one of the most beautiful 18-hole courses in the province. A few years later a new clubhouse, maintenance building and golf cart house were built, at a more central location to complete the course facilities. No longer a true country club, the name of the organization has returned to its roots as the Fernie Golf Club.

In celebration of its impressive history, and to celebrate all who have been a part of making this community asset what it has been and has grown to become today, the Club is hosting a week-long centennial celebration this July.  This week includes special events for the house leagues, as well as an Open House on July 7. Fernie Golf Club members and staffed will be dressed in historical golf attire, and act as your tour guides through historic displays showing the evolution of the club from its 1918 roots. Free activities include Golf Games to introduce children and adults to the sport, as well as a BBQ where builders and developers will be honoured.

The Fernie Golf Club has also announced free memberships this season for juniors, in the tradition of introducing the sport to new golfers and celebrating its Centennial.

Visit golffernie.com for more information and for details on the special 100-year celebration events throughout the season.