Our Ecosystem: The Crown of the Continent 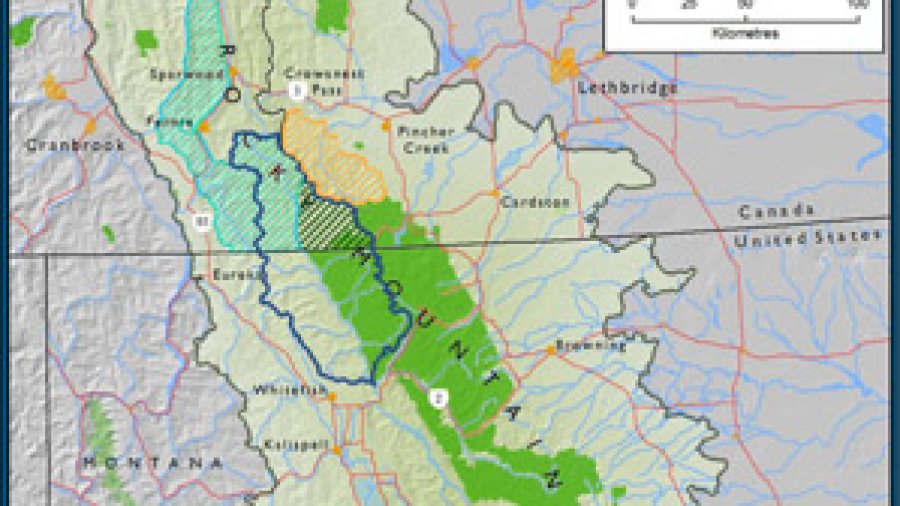 A meeting point of four geographical and climatic zones, the Crown of the Continent feeds rivers flowing into three oceans and is recognized as one of North America’s most intact large ecosystems.

The establishment of Waterton-Glacier International Peace Park in Alberta and Montana began a bi-national era of partnership and protection, but a map of the Peace Park clearly shows that a missing piece remains in the Flathead Valley of British Columbia. This missing piece was first recognized a century ago by Kootenai Brown, the founding superintendent of Waterton-Lakes National Park. Since then, countless individuals and organizations have been working to protect the Flathead.

A big win
After more than 20 years of working to protect the Flathead from incompatible mining proposals, conservationists recognized a big win for the Flathead and the Crown when the B.C. government signed a memorandum of understanding with Montana to prohibit mining, oil and gas development throughout the watershed.

But the work is not done. The next step to complete it would be a feasibility study for a Flathead National Park Reserve in the southeastern third of B.C.’s part of the valley. The study would generate an open discussion of the social and economic impacts of a park. It cannot proceed until the B.C. government, who manages public land in the province, agrees to it.

Next, the Southern Rockies Wildlife Management Area (WMA) needs to be re-established. It was replaced in 2003 with a land use plan that prioritizes mining and energy extraction across the landscape. The Southern Rockies WMA would protect connectivity along the spine of the Rocky Mountains, allowing wildlife to roam between Canada’s Rocky Mountain parks and Waterton-Glacier. The WMA would put the priority on wildlife protection when future land use decisions are being considered. A WMA would balance the benefits humans get from strip mining in the Elk Valley with the requirements of wildlife.

What about the Elk Valley?
The Elk Valley currently has five open-pit coal mines operated by Teck Coal. Selenium levels in the Elk River are increasing to dangerous levels. Teck has recognized this as a problem and has been evaluating different measures to address it. At the same time: Teck has proposed two new mines adjacent to its Line Creek operations and is continuing exploration at another site above Hosmer; Centerpoint Coal from China is planning to begin coal exploration at the Bingay Creek property north of Elkford; BP is planning on starting an exploration program in its 300-square-kilometre tenure area this summer; and Rio-Tinto maintains an interest at Coal Creek.

Wildsight is not against mining. The group recognizes mining as the backbone of the regional economy, providing important benefits to Elk Valley communities. Wildsight does, however, have concerns about the impacts that existing operations are having on water quality in the valley, and about the impacts new mines and coalbed methane developments will add to an already-stressed ecosystem.

Industry, scientists and the Province must discover how to stop and reverse the trend of dangerous selenium levels in the Elk River. Current environmental conditions need to be assessed comprehensively, at the landscape level. And cumulative effects of existing projects should be analyzed so that their true impacts can be evaluated—before any new mines or coalbed methane projects proceed.

The Crown of the Continent is blessed with many incredible values: wildlife, water, forests, minerals and strong communities. It’s an ecosystem unlike any other and it’s not too late to care for it responsibly and fairly. Together, we can do what’s right.
—
Management of the Crown of the Continent will be discussed at the annual Crown Managers Partnership Forum on April 14. Stay tuned to www.wildsight.ca for more details.