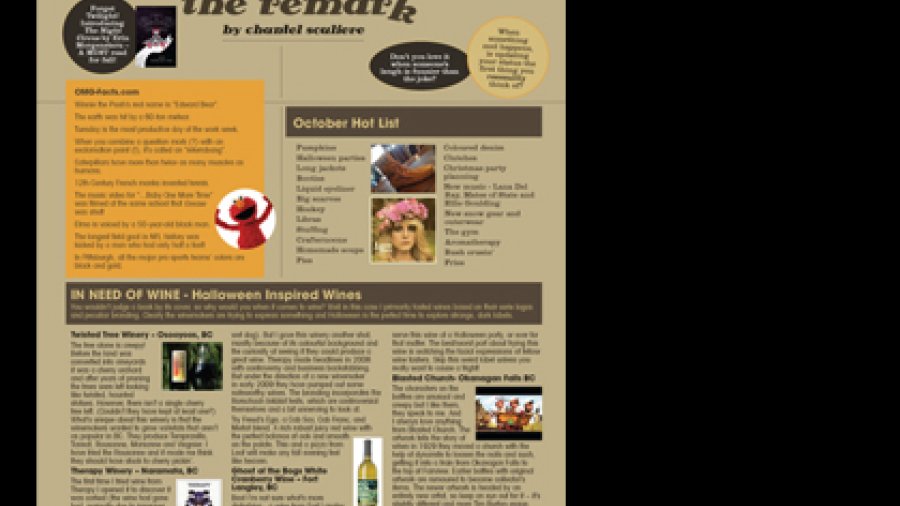 In Need of Wine - Halloween Inspired Wines
You wouldn’t judge a book by its cover, so why would you when it comes to wine? Well in this case I primarily tasted wines based on their eerie logos and peculiar branding. Clearly the winemakers are trying to express something and Halloween is the perfect time to explore strange, dark labels.

Twisted Tree Winery – Osooyoos, BC
The tree alone is creepy! Before the land was converted into vineyards it was a cherry orchard and after years of pruning the trees were left looking like twisted, haunted statues. However, there isn’t a single cherry tree left. (Couldn’t they have kept at least one?) What’s unique about this winery is that the winemakers wanted to grow varietals that aren’t as popular in BC. They produce Tempranillo, Tannat, Rousanne, Marsanne and Viognier. I have tried the Rousanne and it made me think they should have stuck to cherry pickin’.

Therapy Winery – Naramata, BC
The first time I tried wine from Therapy I opened it to discover it was corked (the wine had gone bad, normally due to improper storage or a bad cork, tastes like vinegar and smells like wet dog). But I gave this winery another shot, mostly because of its colourful background and the curiosity of seeing if they could produce a great wine. Thearpy made headlines in 2008 with controversy and business backstabbing. But under the direction of a new winemaker in early 2009 they have pumped out some noteworthy wines. The branding incorporates the Rorschach Inkblot tests, which are controversial themselves and a bit unnerving to look at.

Try Freud’s Ego, a Cab Sav, Cab Franc, and Merlot blend. A rich robust juicy red wine with the perfect balance of oak and smooth on the palate. This and a pizza from Loaf will make any fall evening feel like heaven.

Ghost of the Bogs White Cranberry Wine – Fort Langley, BC
Boo! I’m not sure what’s more disturbing - a wine from Fort Langley, the logo, or that it’s made from white cranberries. Regardless I wouldn’t serve this wine at a Halloween party, or ever for that matter. The best/worst part about trying this wine is watching the facial expressions of fellow wine tasters. Skip this weird label unless you really want to cause a fright!

Blasted Church- Okanagan Falls BC
The characters on the bottles are unusual and creepy but I like them, they speak to me. And I always love anything from Blasted Church. The artwork tells the story of when in 1929 they moved a church with the help of dynamite to loosen the nails and such, getting it into a train from Okanagan Falls to the top of Fairview. Earlier bottles with original artwork are rumored to become collector’s items. The newer artwork is headed by an entirely new artist, so keep an eye out for it – it’s slightly different and more Tim Burton-esque.

OMG –FACTS.com
· Winnie the Pooh’s real name is “Edward Bear”.
· The earth was hit by a 60-ton meteor.
· Tuesday is the most productive day of the work week.
· When you combine a question mark (?) with an exclamation point (!), it’s called an “interrobang”.
· Caterpillars have more than twice as many muscles as humans.
· 12th Century French monks invented tennis.
· The music video for “...Baby One More Time” was filmed at the same school that Grease was shot!
· Elmo is voiced by a 50-year-old black man.
· The longest field goal in NFL history was kicked by a man who had only half a foot!
· In Pittsburgh, all the major pro sports teams’ colors are black and gold.

Don’t you love it when someone’s laugh is funnier than the joke?

When something cool happens, is updating your status the first thing you reeeeallly think of?

Forget Twilight! Introducing The Night Circus by Erin Morgenstern – A MUST read for fall!