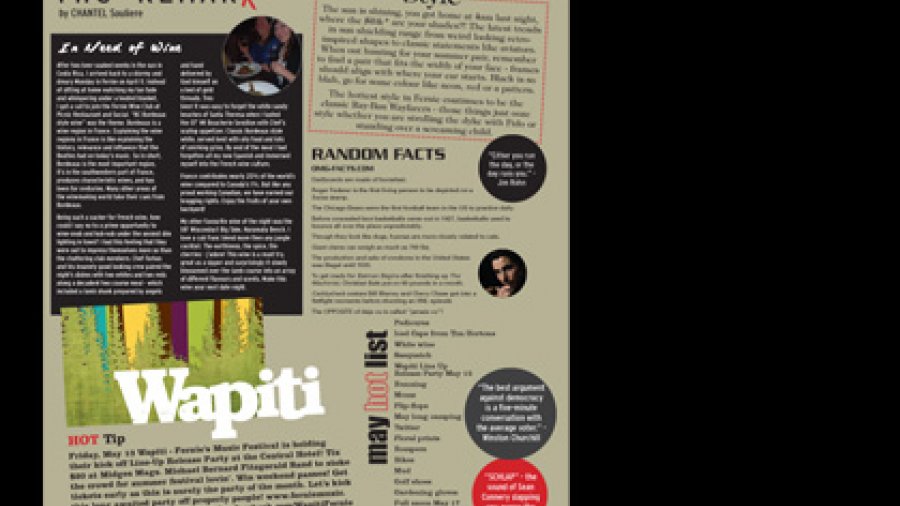 OMG FACTS
Dartboards are made of horsehair.
Roger Federer is the first living person to be depicted on a Swiss stamp.
The Chicago Bears were the first football team in the US to practice daily.
Before concealed-lace basketballs came out in 1927, basketballs used to bounce all over the place unpredictably.
Though they look like dogs, hyenas are more closely related to cats.
Giant clams can weigh as much as 700 lbs.
The production and sale of condoms in the United States was illegal until 1930.
To get ready for Batman Begins after finishing up The Machinist, Christian Bale put on 60 pounds in a month.
Caddyshack costars Bill Murray and Chevy Chase got into a fistfight moments before shooting an SNL episode
The OPPOSITE of deja vu is called "jamais vu"!

Style
The sun is shining, you got home at 4am last night, where the $@&* are your shades?! The latest trends in sun shielding range from weird looking retro-inspired shapes to classic statements like aviators. When out hunting for your summer pair, remember to find a pair that fits the width of your face - frames should align with where your ear starts. Black is so blah, go for some colour like neon, red or a pattern.

The hottest style in Fernie continues to be the classic Ray-Ban Wayfarers - those things just ooze style weather you are strolling the dyke with Fido or standing over a screaming child.

In Need of Wine
After two beer soaked weeks in the sun in Costa Rica, I arrived back to a stormy and dreary Monday in Fernie on April 11. Instead of sitting at home watching my tan fade and whimpering under a heated blanket, I got a call to join the Fernie Wine Club at Picnic Restaurant and Social. “BC Bordeaux style wine” was the theme. Bordeaux is a wine region in France. Explaining the wine regions in France is like explaining the history, relevance and influence that the Beatles had on today’s music. So in short, Bordeaux is the most important region, it’s in the southwestern part of France, produces characteristic wines, and has been for centuries. Many other areas of the wine making world take their cues from Bordeaux.

Being such a sucker for French wine, how could I say no to a prime opportunity to wine-snob and hob-nob under the sexiest dim lighting in town? I had this feeling that they were out to impress themselves more so than the chattering club members. Chef Farkas and his insanely good looking crew paired the night’s dishes with two whites and two reds along a decadent two course meal - which included a lamb shank prepared by angels and hand delivered by God himself on a bed of gold threads. Tres bien! It was easy to forget the white sandy beaches of Santa Theresa when I tasted the 07’ Mt Boucherie Semillon with Chef’s scallop appetizer. Classic Bordeaux style white, served best with oily food and lots of smirking grins. By end of the meal I had forgotten all my new Spanish and immersed myself into the French wine culture.

France contributes nearly 20% of the world’s wine compared to Canada’s 1%. But like any proud working Canadian, we have earned our bragging rights. Enjoy the fruits of your own backyard!

My other favourite wine of the night was the 08’ Misconduct Big Take, Naramata Bench. I love a cab franc blend more then any jungle cocktail. The earthiness, the spice, the cherries - j'adore! This wine is a must try, great as a sipper and surprisingly it slowly blossomed over the lamb course into an array of different flavours and scents. Make this wine your next date night.

HOT Tip
Friday, May 13 Wapiti - Fernie's Music Festival is holding their kick off Line-Up Release Party at the Central Hotel! Tix $20 at Midges Mags. Michael Bernard Fitzgerald Band to stoke the crowd for summer festival lovin'. Win weekend passes! Get tickets early as this is surely the party of the month. Let's kick this long awaited party off properly people! www.ferniemusic.com for all the details. Become a fan facebook.com/WapitiFernie to follow updates.

"Either you run the day, or the day runs you." - Jim Rohn

“SCHLAP” - the sound of Sean Connery slapping you across the face

“The best argument against democracy is a five-minute conversation with the average voter.” - Winston Churchill