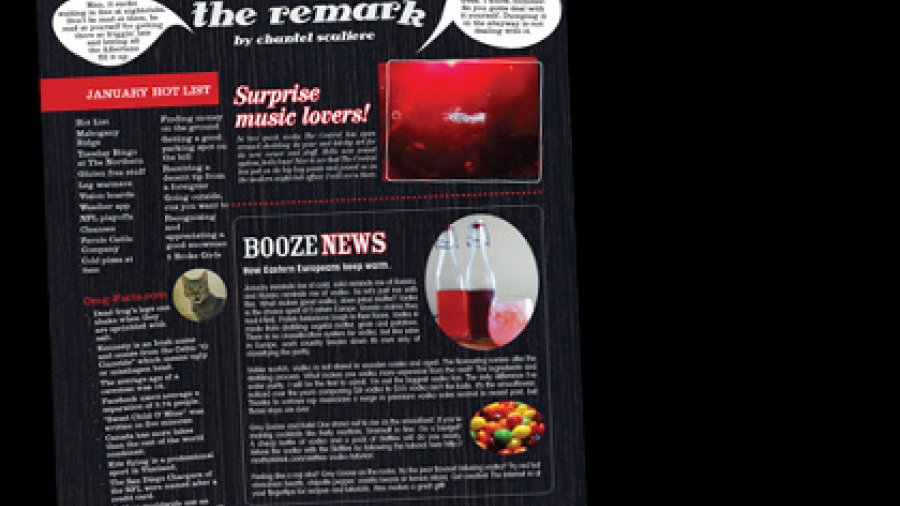 Surprise music lovers! In two quick weeks The Central has spun around shedding its pine and kitchy art for its new owner and staff. Hello new sound system, hello bass! Nice to see that The Central has put on its big boy pants and joined in on the modern nightclub affair. I will see u there.

Omg-Facts.com.
· Dead frog's legs can shake when they are sprinkled with salt.
· Kennedy is an Irish name and comes from the Celtic “O Cinneide” which means ugly or misshapen head.
· The average age of a caveman was 16.
· Facebook users average a separation of 3.74 people.
· “Sweet Child O' Mine” was written in five minutes.
· Canada has more lakes than the rest of the world combined.
· Kite flying is a professional sport in Thailand.
· The San Diego Chargers of the NFL were named after a credit card.
· Golfers worldwide use an estimated $800 million worth of balls annually.

The City of Fernie does not pick up Christmas trees. I know, bummer. So you gotta deal with it yourself. Dumping it in the alleyway is not dealing with it.

Man, it sucks waiting in line at nightclubs. Don't be mad at them, be mad at yourself for getting there so friggin’ late and letting all the Albertans fill it up.

How Eastern Europeans keep warm.
January reminds me of cold, cold reminds me of Russia, and Russia reminds me of vodka. So let’s just run with this. What makes good vodka, does price matter? Vodka is the choice spirit of Eastern Europe. Russia claims they had it first, Polish historians laugh in their faces. Vodka is made from distilling vegetal matter, grain and potatoes. There is no classification system for vodka, but like wine in Europe, each country breaks down its own way of classifying the purity.

Unlike scotch, vodka is not stored in wooden casks and aged. The flavouring comes after the distilling process. What makes one vodka more expensive from the next? The ingredients and water purity. I will be the first to admit, I’m not the biggest vodka fan. The only difference I’ve noticed over the years comparing $9 vodka to $55 vodka isn’t the taste, it’s the smoothness. Thanks to various rap musicians a surge in premium vodka sales soared in recent past, but those days are over.

Grey Goose and Ketel One stand out to me as the smoothest. If you’re making cocktails like fruity martinis, Smirnoff is fine. On a budget? A cheap bottle of vodka and a pack of Skittles will do you nicely. Infuse the vodka with the Skittles by following the tutorial here http://mixthatdrink.com/skittles-vodka-tutorial/.

Feeling like a rap star? Grey Goose on the rocks, try the pear flavour! Infusing vodka? Try red hot cinnamon hearts, chipotle pepper, vanilla beans or lemon slices. Get creative! The internet is at your fingertips for recipes and tutorials. Also makes a great gift!