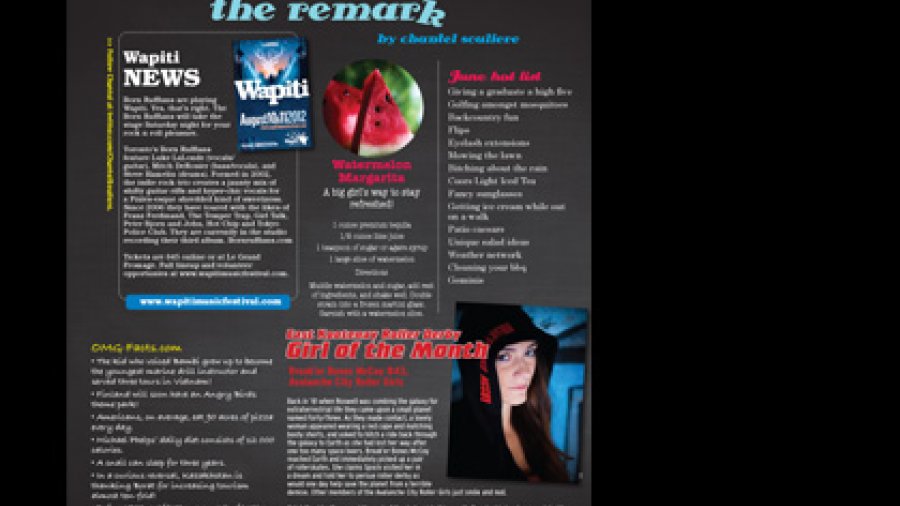 OMG-Facts.com
• The kid who voiced Bambi grew up to become the youngest marine drill instructor and served three tours in Vietnam!
• Finland will soon have an Angry Birds theme park!
• Americans, on average, eat 90 acres of pizza every day.
• Michael Phelps' daily diet consists of 12 000 calories.
• A snail can sleep for three years.
• In a curious reversal, Kazakhstan is thanking Borat for increasing tourism almost ten-fold!
• Before 1850, golf balls were made of leather and were stuffed with feathers.

Derby Girl of the Month
Break'er Bones McCoy #43, Avalanche City Roller Girls
Back in ’81 when Roswell was combing the galaxy for extraterrestrial life they came upon a small planet named Forty-Three. As they made contact, a lovely woman appeared wearing a red cape and matching booty shorts, and asked to hitch a ride back through the galaxy to Earth as she had lost her way after one too many space beers. Break’er Bones McCoy reached Earth and immediately picked up a pair of rollerskates. She claims Spock visited her in a dream and told her to persue roller derby as it would one day help save the planet from a terrible demise. Other members of the Avalanche City Roller Girls just smile and nod.

Catch Break'er Bones and the rest of the derby girls this month. Two double headers are slated for June. Full schedule and details at www.eastkootenayrollerderby.com.

Tickets are $45 online or at Le Grand Fromage. Full lineup and volunteer opportunies at www.wapitimusicfestival.com.