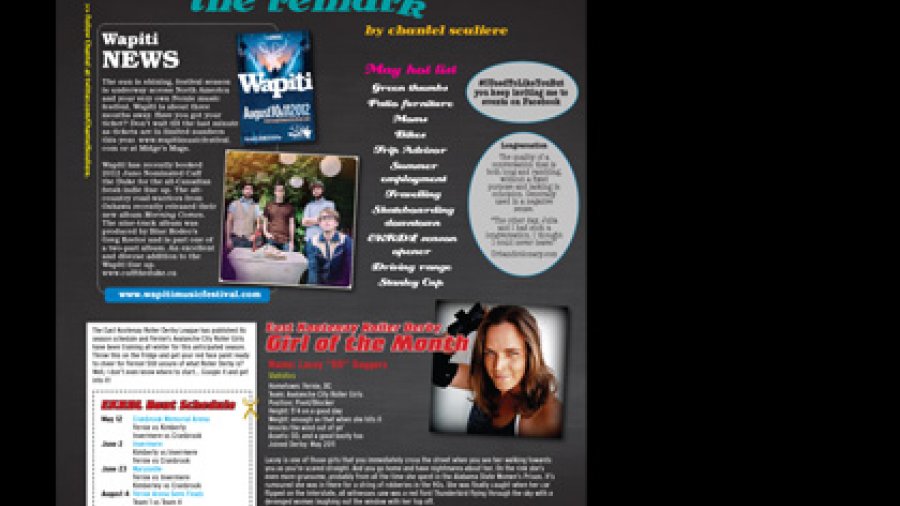 Wapiti NEWS
The sun is shining, festival season is underway across North America and your very own Fernie music festival, Wapiti is about three months away. Have you got your ticket? Don’t wait till the last minute as tickets are in limited numbers this year. www.wapitimusicfestival.com or at Midge’s Mags.

Wapiti has recently booked 2012 Juno Nominated Cuff the Duke for the all-Canadian fresh indie line up. The alt-country road-warriors from Oshawa recently released their new album Morning Comes. The nine-track album was produced by Blue Rodeo’s Greg Keelor and is part one of a two-part album. An excellent and diverse addition to the Wapiti line up.
www.cufftheduke.ca

#IUsedToLikeYouBut you keep inviting me to events on Facebook

Longversation
The quality of a conversation that is both long and rambling, without a fixed purpose and lacking in concision. Generally used in a negative sense.
“The other day, Julia and I had such a longversation. I thought I could never leave!”
Urbandictionary.com

EKRDL Roller Girl of the Month
Name: Lacey “DD” Daggers
Bio:
Lacey is one of those girls that you immediately cross the street when you see her walking towards you as you’re scared straight. And you go home and have nightmares about her. On the rink she’s even more gruesome, probably from all the time she spent in the Alabama State Women’s Prison. It’s rumored she was in there for a string of robberies in the 90s. She was finally caught when her car flipped on the Interstate, all witnesses saw was a red Ford Thunderbird flying through the sky with a deranged woman laughing out the window with her top off.

Fernie is “lucky” to have her.

Statistics
Hometown: Fernie, BC
Team: Avalanche City Roller Girls
Position: Pivot/Blocker
Height: 5'4 on a good day
Weight: enough so that when she hits it knocks the wind out of ya’
Assets: DD, and a good booty too
Joined Derby: May 2011