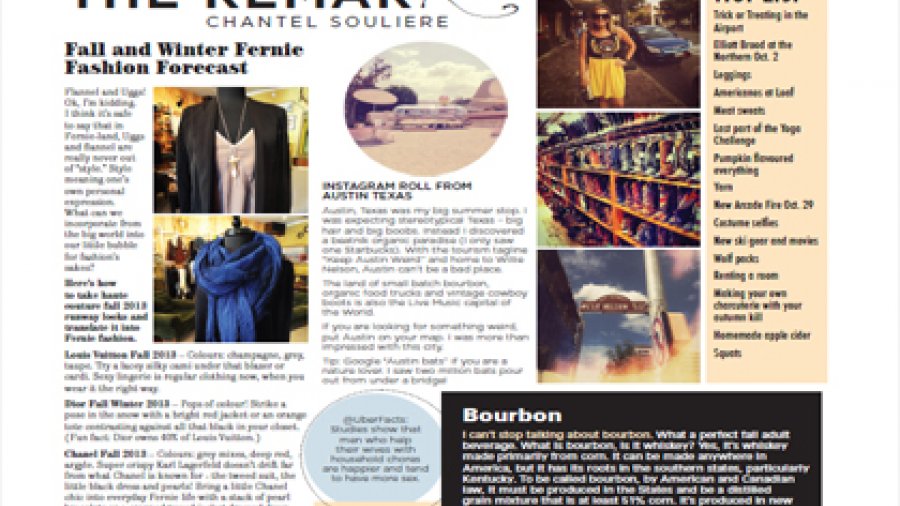 Fall and Winter Fernie Fashion Forecast
Flannel and Uggs! Ok, I’m kidding. I think it’s safe to say that in Fernie-land, Uggs and flannel are really never out of “style.” Style meaning one’s own personal expression. What can we incorporate from the big world into our little bubble for fashion’s sakes?
Here’s how to takehaute couture fall 2013 runway looks and translate it into Fernie fashion.

Louis Vuitton Fall 2013 – Colours: champagne, grey, taupe. Mr. Mark Jacobs (the chief designer at LV, not Louis who died in 1892) at the helm of this fashion empire has created a vampy, lingerie-filled winter look. Try a lacey silky cami under that blazer or cardi. Sexy lingerie is regular clothing now, when you wear it the right way.

Dior Fall Winter 2013 – Pops of colour! Strike a pose in the snow with a bright red jacket or an orange tote contrasting against all that black in your closet. (Fun fact: Dior owns 40% of Louis Vuitton.)

Chanel Fall 2013 – Colours: grey mixes, deep red, argyle. Super crispy Karl Lagerfeld (creative director) doesn’t drift far from what Chanel is known for - the tweed suit, the little black dress and pearls! Bring a little Chanel chic into everyday Fernie life with a stack of pearl bracelets or a cropped tweed jacket dressed down with a pair of ripped/distressed skinnies.

Micheal Kors Fall 2013 – Colours: cobalt, white, tangerine. Here we see contrasting and colour blocking with black again like Dior. MK can be personally thanked for the surge in giant metal watches adorning many women with red license plates. If you can’t afford the MK watch, you can always settle for a knockoff at Walmart.

Saint Laurent Fall 2013 – Feminine wear with a masculine and clean edge. Formally known as YSL, in 2013 they rebranded under a new head designer and went with “Saint Laurent.” To add a little Saint Laurent in Fernie, look for a handbag in the ‘Satchel” style. Or a collared shirt tucked in or hanging out of a great pair of tight black jeans. SL also went heavy with the fur this season. If you’re feeling brave, throw on a faux fur vest over your favorite flannel.

Bourbon
I can’t stop talking about bourbon. What a perfect fall adult beverage.What is bourbon, is it whiskey? Yes, it’s whiskey made primarily from corn. It can be made anywhere in America, but it has its roots in the southern states, particularly Kentucky. To be called bourbon, by American and Canadian law, it must be produced in the States and be a distilled grain mixture that is at least 51% corn. It’s produced in new charred-oak barrels for as little as three months before it’s sold. To be called “straight” bourbon, it must be distilled for a minimum of two years and have no additives.

Corn-tastic Bourbon found in Fernie:
Bulleit Bourbon: a straight bourbon, spicy rye vanilla with a hay and flower bouquet. $35.99. Serve on the rocks! I just toured Austin, Texas this August, and this bourbon was EVERYWHERE.
Maker’s Mark: Carmel, vanilla and soft. Try in a Manhattan. $42.95

1: Have you downloaded the BC Liquor Stores App? Explore, rate products and save your favorites! I love this APP!

2. Twerk:The rhythmic gyrating of the lower fleshy extremities in a lascivious manner with the intent to elicit sexual arousal or laughter in ones intended audience.

3. @UberFacts: Studies show that men who help their wives with household chores are happier and tend to have more sex.

Instagram Roll from Austin Texas
Austin, Texas was my big summer stop. I was expecting stereotypical Texas – big hair and big boobs. Instead I discovered a beatnik organic paradise (I only saw one Starbucks). With the tourism tagline “Keep Austin Weird” and home to Willie Nelson, Austin can’t be a bad place.
The land of small batch bourbon, organic food trucks and vintage cowboy boots is also the Live Music capital of the World.

If you are looking for something weird, put Austin on your map. I was more than impressed with this city.

Tip: Google "Austin bats" if you are a nature lover. I saw two million bats pour out from under a bridge!