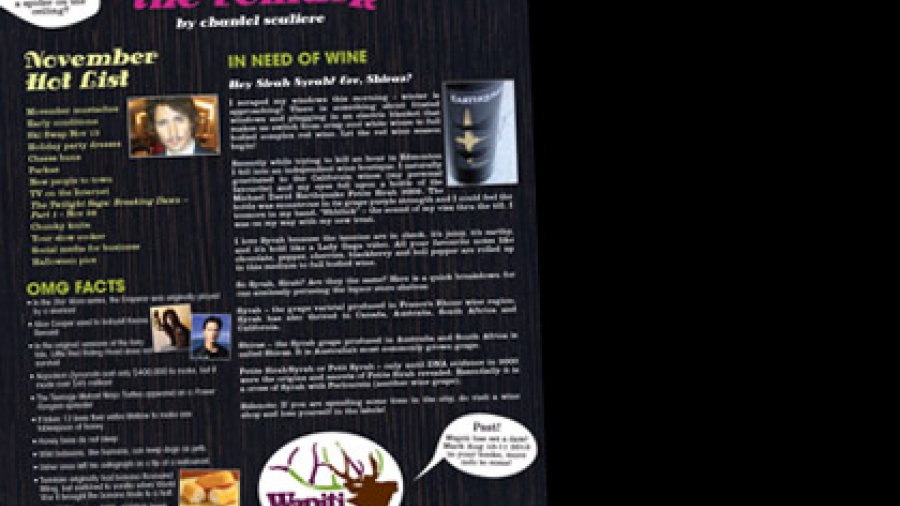 OMG FACTS
· In the Star Wars series, the Emperor was originally played by a woman!
· Alice Cooper used to babysit Keanu Reeves!
· In the original versions of the fairy tale, Little Red Riding Hood does not survive!
· Napoleon Dynamite cost only $400,000 to make, but it made over $45 million!
· The Teenage Mutant Ninja Turtles appeared on a Power Rangers episode!
· It takes 12 bees their entire lifetime to make one tablespoon of honey.
· Honey bees do not sleep
· Wild baboons, like humans, can keep dogs as pets.
· Usher once left his autograph as a tip at a restaurant.
· Twinkies originally had banana-flavored filling, but switched to vanilla when World War II brought the banana trade to a halt.
· In a 2008 survey, 58% of British teens thought Sherlock Holmes was a real guy, while 20% thought Winston Churchill was not.

In Need of Wine
Hey Sirah Syrah! Err, Shiraz?
I scraped my windows this morning - winter is approaching! There is something about frosted windows and plugging in an electric blanket that makes us switch from crisp cool white wines to full bodied complex red wine. Let the red wine season begin!

Recently while trying to kill an hour in Edmonton I fell into an independent wine boutique. I naturally gravitated to the California wines (my personal favorite) and my eyes fell upon a bottle of the Michael David Earthquake Petite Sirah 2008. The bottle was monstrous in its grape purple strength and I could feel the tremors in my hand. “Shhlink” – the sound of my visa thru the till. I was on my way with my new treat.

I love Syrah because the tannins are in check, it’s juicy, it’s earthy, and it’s bold like a Lady Gaga video. All your favorite notes like chocolate, pepper, cherries, blackberry and bell pepper are rolled up in this medium to full bodied wine.

So Syrah, Sirah? Are they the same? Here is a quick breakdown for one aimlessly perusing the liquor store shelves:
Syrah – the grape varietal produced in France’s Rhone wine region. Syrah has also thrived in Canada, Austrailia, South Aftrica and California.
Shiraz – the Syrah grape produced in Australia and South Africa is called Shiraz. It is Australia’s most commonly grown grape.
Petite Sirah/Syrah or Petit Syrah – only until DNA evidence in 2003 were the origins and secrets of Petite Sirah revealed. Essentially it is a cross of Syrah with Perloursin (another wine grape).
Sidenote: If you are spending some time in the city, do visit a wine shop and loose yourself in the labels!