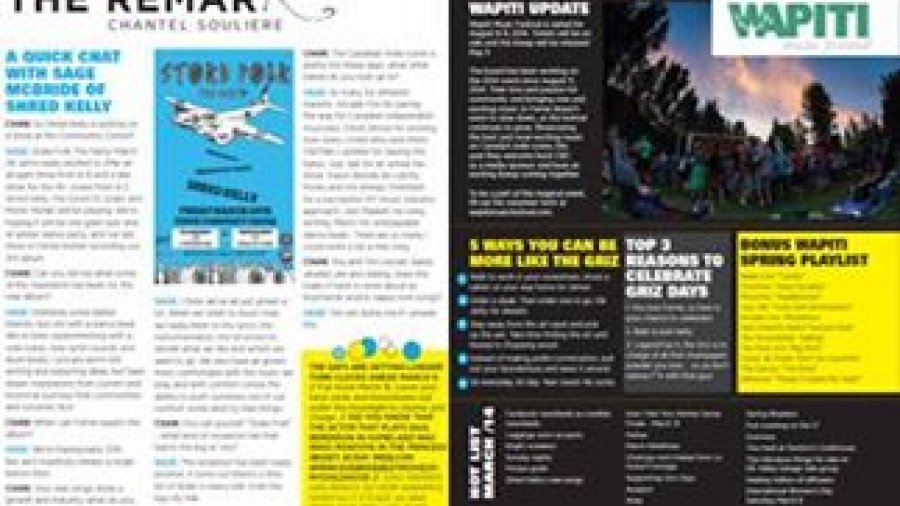 Bubble
The days are getting longer! Turn clocks ahead March 9

Bubble
Did you know that the actor that plays Saul Berenson in Homeland was Inigo Montoya in the Princess Bride?! #Cray imdb.com #princessbridebestmovieofmychildhood

Bubble
Full moon March 16. Leave your tarot cards and moonstones out under the moonlight to cleanse and charge.

Top 3 Reasons to Celebrate Griz Days
1. You love Fernie, so here is your chance to celebrate!
2. Beer is sure tasty
3. Legend has it, the Griz is in charge of all that champagne power you love… so ya don’t wanna f^*k with that guy!

Wapiti Update
Wapiti Music Festival is slated for August 8-9, 2014. Tickets will be on sale and the lineup will be released May 1!

The board has been working on the 2014 event since August 11, 2014. Their love and passion for community and bringing new and exciting music to Fernie doesn’t seem to slow down, as the festival continues to grow. Showcasing the best and most exciting music on Canada’s indie scene, this year they welcome back CBC as a media sponsor and have an exciting lineup coming together.

To be a part of this magical event, fill out the volunteer form at wapitimusicfestival.com.

Wapiti Bubble: Juno Awards airs March 30 from Winnipeg! Hopefully it’s not as awkward as it was last year!

5 ways you can be more like the Griz
1. Walk to work in your snowshoes, shoot a rabbit on your way home for dinner.
2. Order a steak. Then order one to go. Elk Jerky for dessert.
3. Step away from the art easel and pick up the axe. Take time finding the art and finesse in chopping wood.
4. Instead of making polite conversation, pull out your blunderbuss and wave it around
5. Ski everyday. All day. Year round. No socks.

A Quick Chat with Sage McBride of Shred Kelly

Chan: So Shred Kelly is putting on a show at the Community Centre?

Sage: Stoke Folk The Party! March 28, we're really excited to offer an all ages show from 6-8 and a late show for the 19+ crowd from 9-2. Shred Kelly, The Good Ol' Goats and Mister Mofatt will be playing. We're hoping it will be one giant epic end of winter dance party, and our last show in Fernie before recording our 3rd album.

Chan: Can you tell me what some of the inspiration has been for the new album?

Sage: Definitely some darker themes, but still with a dance beat. We’ve been experimenting with a cello banjo, new synth sounds and drum beats. Lyrically we're still writing and exploring ideas, but have drawn inspirations from current and historical journeys that communities and societies face.

Chan: When can Fernie expect the album?

Sage: We're hoping early 2015. But we'll hopefully release a single before then.

Chan: Your new songs show a growth and maturity, what do you think is fuelling the progression?

Sage: I think we've all just grown a lot. When we listen to music now, we really listen to the lyrics, the instrumentation, the structure to decide what we like and where we want to go. We also have all grown more comfortable with the music we play, and with comfort comes the ability to push ourselves out of our comfort zones and try new things.

Chan: You call yourself "Stoke Folk" – what kind of reception has that had in the big ol’ city?

Sage: The reception has been really positive. It turns out there's a little bit of stoke in every folk. Even the big city folk.

Chan: The Canadian Indie scene is pretty hot these days, what other bands do you look up too?

Sage: So many for different reasons. Arcade Fire for paving the way for Canadian independent musicians. Elliott Brood for winning over every crowd who sees them. Old Man Luedeke for slaying the banjo. July Talk for an unreal live show. Yukon Blonde for catchy hooks and live energy. Hollerado for a successful DIY music industry approach, Joel Plaskett for song writing. Metric for unstoppable dance beats. There are so many, I could write a list a mile long.

Chan: You and Tim (vocals, banjo, ukulele) are also dating, does this make it hard to write about ex-boyfriends and/or sappy love songs?

Sage: Tim will dump me if I answer this.