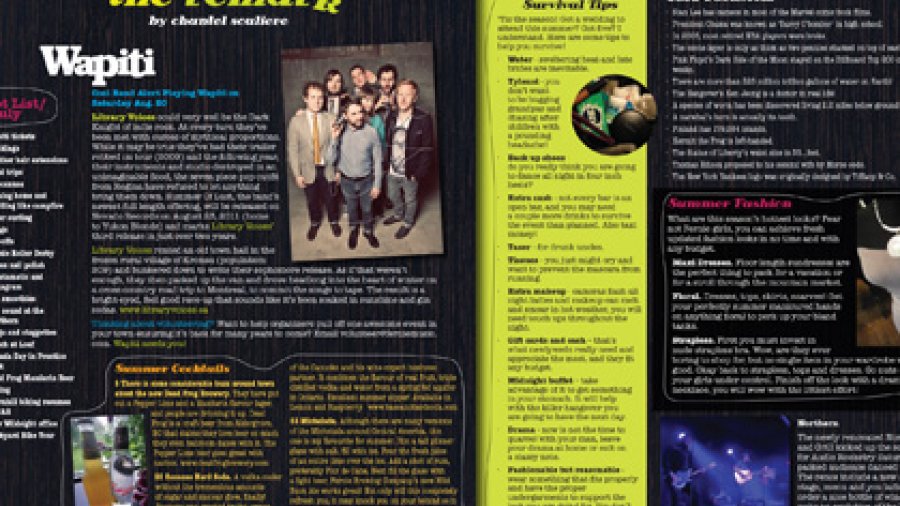 OMG-Facts.com
· Stan Lee has cameos in most of the Marvel comic book films.
· President Obama was known as ‘Barry O’bomber’ in high school.
· In 2008, most retired NBA players were broke.
· The ozone layer is only as thick as two pennies stacked on top of each other.
· Pink Floyd’s Dark Side of the Moon stayed on the Billboard Top 200 charts for 736 weeks.
· There are more than 326 million trillion gallons of water on Earth!
· The Hangover’s Ken Jeong is a doctor in real life!
· A species of worm has been discovered living 2.2 miles below ground!
· A narwhal’s horn is actually its tooth.
· Finland has 179,584 islands.
· Kermit the Frog is left-handed.
· The Statue of Liberty's waist size is 35...feet.
· Thomas Edison proposed to his second wife by Morse code.
· The New York Yankees logo was originally designed by Tiffany & Co.

Summer Fashion
What are this season’s hottest looks? Fear not Fernie girls, you can achieve fresh updated fashion looks in no time and with any budget.
-Maxi Dresses. Floor length sundresses are the perfect thing to pack for a vacation or for a stroll through the mountain market.
- Floral. Dresses, tops, skirts, scarves! Get your perfectly summer manicured hands on anything floral to perk up your bland tanks.
-Strapless. First you must invest in a nude strapless bra. Wow, are they ever boring to shop for, but no single item in your wardrobe will do you so good. Okay back to strapless, tops and dresses. Go nuts once you have your girls under control. Finish off the look with a dramatic or bib necklace, you will wow with the littlest effort!

Summer Cocktails
$ There is some considerable buzz around town about the new Dead Frog Brewery. They have put out a Pepper Lime and a Mandarin flavor lager, and people are drinking it up. Dead Frog is a craft beer from Aldergrove, BC that claims they love beer so much they even ballroom dance with it. The Pepper Lime beer goes great with nachos. www.deadfrogbrewery.ca

$$ Bassano Hard Soda. A vodka cooler without the tremendous amounts of sugar and nuclear glow, finally! Bassano was created by the owner of the Canucks and his wine expert business partner. It combines the flavor of real fruit, triple distilled vodka and water from a spring-fed aquifer in Ontario. Excellent summer sipper! Available in Lemon and Raspberry. www.bassanohardsoda.com

$$ Michelada. Although there are many versions of the Michelada around Central America, this one is my favorite for summer. Rim a tall pilsner glass with salt, fill with ice. Pour the fresh juice of an entire lime over the ice. Add a shot of rum, preferably Flor de Cana. Next fill the glass with a light beer, Fernie Brewing Company’s new Wild Buck Ale works great! Not only will this completely refresh you, it may knock you on your behind so it comes with a warning.

Wedding Survival Tips
‘Tis the season! Got a wedding to attend this summer? Got five? I understand. Here are some tips to help you survive!
· Water - sweltering heat and late brides are inevitable.
· Tylenol - you don’t want to be hugging grandpas and chasing after children with a pounding headache!
· Back up shoes - do you really think you are going to dance all night in four inch heels?
· Extra cash - not every bar is an open bar, and you may need a couple more drinks to survive the event than planned. Also taxi money!
· Taser - for drunk uncles.
· Tissues - you just might cry and want to prevent the mascara from running
· Extra makeup - cameras flash all night ladies and makeup can melt and smear in hot weather, you will need touch ups throughout the night.
· Gift cards and cash – that’s what newlyweds really need and appreciate the most, and they fit any budget.
· Midnight buffet – take advantage of it to get something in your stomach. It will help with the killer hangover you are going to have the next day.
· Drama - now is not the time to quarrel with your man, leave your drama at home or exit on a classy note.
· Fashionable but reasonable - wear something that fits properly and have the proper undergarments to support the look you are going for. You don’t want to be tugging at or busting out of a dress all night.

Northern
The newly renovated Northern Bar and Grill kicked up the sound system for Audio Rocketry Saturday June 5. A packed audience danced the night on. The renos include a new sound system, stage, menu and you ladies can now order a nice bottle of wine. It’s been quite an evolution of the Northern Bar I'll say.

Wapiti
Cool Band Alert Playing Wapiti on Saturday Aug. 20
Library Voices could very well be the Dark Knight of indie rock. At every turn they’ve been met with curses of mythical proportions. While it may be true they’ve had their trailer robbed on tour (2009) and the following year, their instruments and studio destroyed in an unimaginable flood, the seven piece pop-outfit from Regina have refused to let anything bring them down. Summer Of Lust, the band’s newest full length offering, will be released on Nevado Records on August 23, 2011 (home to Yukon Blonde) and marks Library Voices’ third release in just over two years.

Library Voices rented an old town hall in the frozen rural village of Kronau (population: 209) and bunkered down to write their sophomore release. As if that weren’t enough, they then packed up the van and drove headlong into the heart of winter on a cross-country road trip to Montreal, to commit the songs to tape. The result is a bright-eyed, feel good rave-up that sounds like it’s been soaked in sunshine and gin sodas. www.libraryvoices.ca

Thinking about volunteering? Want to help organizers pull off one awesome event in your town ensuring it’s back for many years to come? Email volunteer@ferniemusic.com Wapiti needs you!