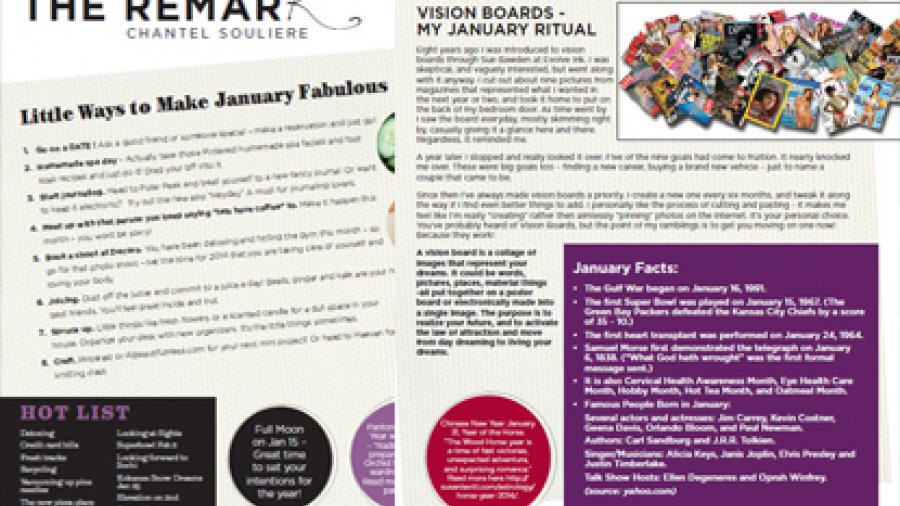 Bubble
Full Moon on Jan 15 – Great time to set your intentions for the year!

Bubble
Pantone Colour of the Year was announced – “Radiant Orchid.” Be prepared for Radiant Orchid to infiltrate your wardrobe and home. Read more about this at pantone.com.

Vision Boards - My January Ritual
Eight years ago I was introduced to vision boards through Sue Bawden at Evolve Ink. I was skeptical, and vaguely interested, but went along with it anyway. I cut out about nine pictures from magazines that represented what I wanted in the next year or two, and took it home to put on the back of my bedroom door. As time went by I saw the board everyday, mostly skimming right by, casually giving it a glance here and there. Regardless, it reminded me.

A year later I stopped and really looked it over. Five of the nine goals had come to fruition. It nearly knocked me over. These were big goals too – finding a new career, buying a brand new vehicle – just to name a couple that came to be.

Since then I’ve always made vision boards a priority. I create a new one every six months, and tweak it along the way if I find even better things to add. I personally like the process of cutting and pasting - it makes me feel like I’m really “creating” rather then aimlessly “pinning” photos on the internet. It’s your personal choice. You’ve probably heard of Vision Boards, but the point of my ramblings is to get you moving on one now! Because they work!

A vision board is a collage of images that represent your dreams. It could be words, pictures, places, material things -all put together on a poster board or electronically made into a single image. The purpose is to realize your future, and to activate the law of attraction and move from day dreaming to living your dreams.