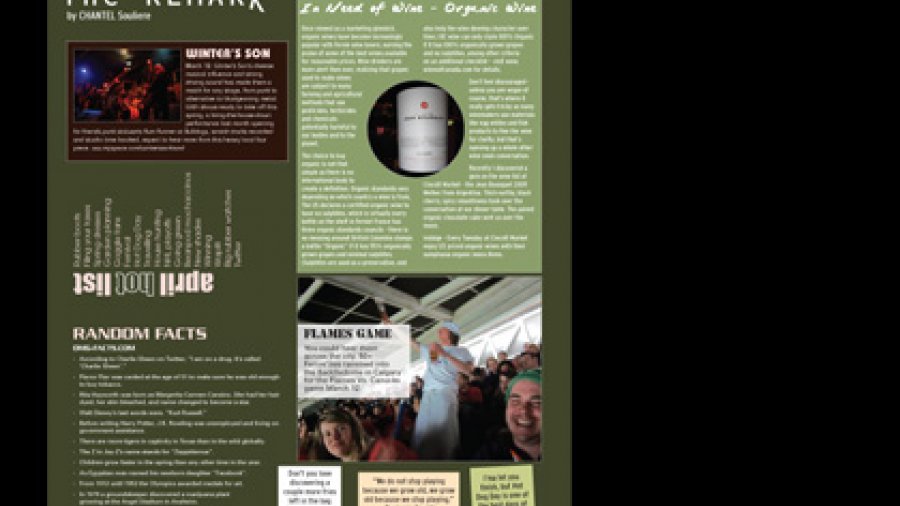 OMG-FACTS
- According to Charlie Sheen on Twitter, "I am on a drug. It's called 'Charlie Sheen'."
- Flavor Flav was carded at the age of 51 to make sure he was old enough to buy tobacco.
- Rita Hayworth was born as Margerita Carmen Cansino. She had her hair dyed, her skin bleached, and name changed to become a star.
- Walt Disney’s last words were, “Kurt Russell.”
- Before writing Harry Potter, J.K. Rowling was unemployed and living on government assistance.
- There are more tigers in captivity in Texas than in the wild globally.
- The Z in Jay-Z's name stands for "Zeppidemus".
- Children grow faster in the spring than any other time in the year.
- An Egyptian man named his newborn daughter “Facebook”.
- From 1912 until 1952 the Olympics awarded medals for art.
- In 1976 a groundskeeper discovered a marijuana plant growing at the Angel Stadium in Anaheim.

In Need of Wine - Organic Wine
Once viewed as a marketing gimmick, organic wines have become increasingly popular with Fernie wine lovers, earning the praise of some of the best wines available for reasonable prices. Wine drinkers are more alert then ever, realizing that grapes used to make wines are subject to many farming and agricultural methods that use pesticides, herbicides and chemicals potentially harmful to our bodies and to the planet.

The choice to buy organic is not that simple as there is no international body to create a definition. Organic standards vary depending on what country the wine comes from, The US declares a certified organic wine to have no sulphites, which is virtually every bottle on the shelf in Fernie! France has three organic standards councils - there is no messing around! British Columbia stamps a bottle “Organic” if it has 95% organically grown grapes and minimal sulphites. (Sulphites are used as a preservative, is also helps the wine develop character over time.) BC wine can only claim 100% Organic if it has 100% organically grown grapes and no sulphites among with an additional checklist – visit www.winesofcanada.com for details.

Don’t feel discouraged - unless you are vegan of course, that’s where it really gets tricky as many winemakers use materials like egg whites and fish products to fine the wine for clarity, but that’s opening up a whole other wine snob conversation.

Recently I discovered a gem on the wine list at Cincott Market - the Jean Bousquet 2009 Melbec from Argentina. Thick earthy, black cherry, spicy smoothness took over the conversation at our dinner table. The paired organic chocolate cake sent us over the moon.
Indulge - Every Tuesday at Cincott Market enjoy 1/2 priced organic wines with their sumptuous organic menu items.

WINTER’S SON
March 12. Winter’s Son’s diverse musical influence and strong driving sound has made them a match for any stage, from punk to alternative to bludgeoning metal. With shows ready to take off this spring and a bring-the-house-down performance last month opening for friends punk stalwarts Rum Runner at Bulldogs, scratch tracks recorded and studio time booked, expect to hear more from this heavy local four piece. ww.myspace.com/winterssonband

Flames Game
You could hear them across the city. 50+ Fernie’ites rammed into the Saddledome in Calgary for the Flames Vs. Canucks game March 12.