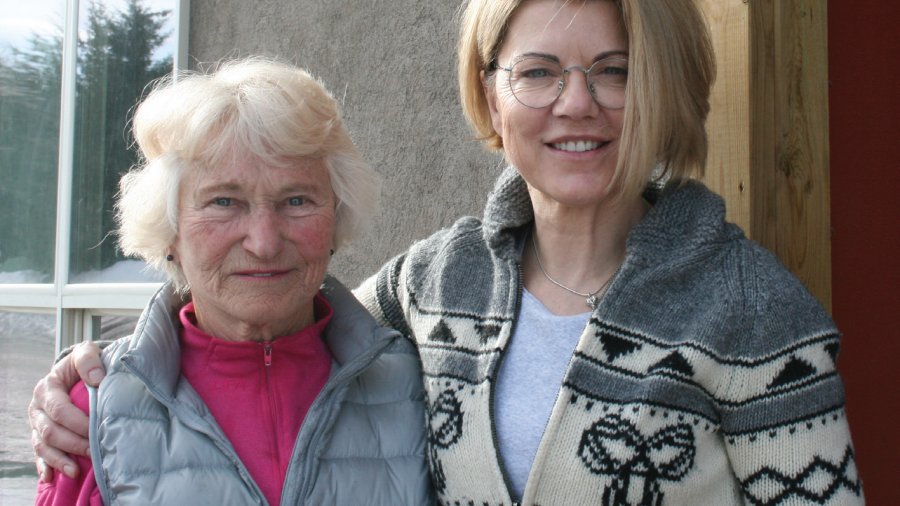 I feel grateful to have known these two extraordinary women for much of my life. Growing up, everyone felt like they knew Linda and Heiko. They were Fernie famous, and both so friendly and welcoming when visiting Fernie Snow Valley or the Ski Base. When I moved back home, and Vanessa and I started the FernieFix, our relationships became stronger and I began to see them both more regularly… whether it was on the trails, for an interview, to toss around some ideas, or just running into them around town. They were so supportive of our magazine, from the beginning.

Zuzana I knew more personally from a young age, as she worked as a hair stylist at my mom’s shop, Maija’s Hair Design, alongside her own mom, Maria. I was so infatuated with her, as were my sisters. She was young, beautiful and seemed so exotic to me (having come to Fernie from the Czech Republic at 18).

Interestingly, meeting for coffee at ouroffice one Monday afternoon in February is the first time I have sat with Linda and Zuzana together. Over the nearly two hours of our meeting, I admire the love, respect and support that runs between them and begin to realize how much these two have in common. Their connection began shortly after Zuzana arrived in Fernie in 1980. Having left their country to escape the communist regime, Zuzana and her family were starting over again and through a mutual connection, met with Linda at the Ski Base to get outfitted for skiing. Little did either of them know that Zuzana too would one day run the Ski Base.

This year marks the 50th Anniversary of this iconic store in downtown Fernie. Linda started the shop in 1967 above the MC Cash Grocery Store. “We rented one room upstairs from November to February,” she says, adding that it was above what is now the Quilt Shop. “They were apartments, and once we closed in February I moved everything to the basement until the next season.” (Zuzana laughs, saying she sometimes wishes she could do the same.) After two years, they moved to the Salvation Army building for a couple of years. “Then we moved to the building it is in now, but it was one narrow hall.” In 1984, they expanded taking over the full right side. They renovated the current space, took out some apartments and added the upstairs. In 1995 they bought the coffee shop next door (The Back Room Café) and created the space we currently know today. This all happened at the same time Heiko was making a name for himself and for Fernie at Fernie Snow Valley, which he purchased in 1972.

As the Ski Base grew alongside Fernie’s recreational offerings, so did its staff. Ralph Simpson became part of the team in 1985, the first year the Ski Base was open year-round. A lover of wind surfing, skiing and biking, it was a great fit… even with the quiet summer months. “I remember reading all of the Russian novels that first summer,” says Linda. “Nobody came in, summer was really quiet at the time.” Eventually the sport of mountain biking came on the scene, and things started to change. “When they first started selling mountain bikes, Ralph recorded every person’s name, the bike they purchased, serial number, etc. in a book,” says Zuzana, who still has the book.

Zuzana first met Ralph when he came in for a haircut. I always heard that he courted her for some time, though Zuzana laughs at this and says they were merely friends at first. In 1989, the two married at the Griz Inn. Zuzana had her own bookkeeping business, and Ralph started taking on a more serious role at the Ski Base. In 2000, Linda and Heiko had an offer on the business and she thought, if I’m selling it to anyone it’s going to be Ralph. “It was simple on both sides, a win-win situation. From the time it was offered to the time of purchase was six months,” says Linda. When Zuzana and Ralph had paid off the inventory, Linda and Heiko suggested they purchase the building, and they did in 2006.

“I remember Ralph saying that the only thing that changed for him was exchanging one European boss for another!” laughs Zuzana. “And I never saw Linda so happy,” she adds. And Linda was happy, having run her own business for 33 years she was ready to retire. “It’s not easy, you can never shut it off,” she says, and we all nod in agreement. The three of us continue to talk, well into the afternoon. They share with me their tolerance or intolerance for risk, Linda admitting that she was always the worrier and Heiko the risk taker. “And Ralph was so good natured about things and confident, if I ever worried or flew off the handle once in a while he took it greatly,” says Linda. “And he was never afraid of competition, I admired that about him.” Zuzana admits to being the risk taker between her and Ralph, but having owned the business for nearly 17 years, on her own since Ralph’s passing in 2009, she thinks about not being as involved. Linda is quick to say she was in her 60’s when she retired, “And you’re just 55. You have some time,” and we all have a good chuckle. Perhaps with her son Garyk now working at the Ski Base, it won’t be too far off. What many do not know is that with the transaction of the Ski Base went the Griz logo. Heiko himself came up with the Legend of the Griz.

In the 60s, Heiko and Linda were the only ones to hike to the top of the Bear to ski. “He thought the headwall was so fantastic, and used to say that someone was walking around up there making the snow fall with a gun. He told the fellas the story one day after skiing, and Dave Rogers said… that’s the most BS I ever heard out of you!” Linda recalls. Heiko created a small sketch of the Griz, Ken Schneider refined it a little, and then Jack McLean, a local artist finalized the logo to what it is today. “Muriel MacLeod started Griz Days when she worked in Marketing for Heiko. She had taken a course in ski area management, and having
travelled to different resorts came up with the idea,” adds Linda. This year marks the 40th Anniversary of Griz Days, a weekend festival organized by the Fernie Chamber of Commerce that has become an integral part of the winter season in Fernie.

1.When did you first arrive in Fernie and what brought you here?
Z. We arrived in 1980, and came as we were escaping the communist regime. My parent’s had acquaintances in Fernie.
L. We came 50 years ago, on February 15 in 1966 for one year. Heiko came as a forester.

2. Where did you first live in town?
Z. In the Annex, there was a four-plex on 9th Ave and 9th Street.

L. We couldn’t find a place to live, so we had to buy a house in the Airport… the upper part, as the Airport was actually an airport at the time.

3. What was your first impression?
Z. It was wild. I remember thinking, “Where did my parents bring me?” It was in the middle of nowhere! I was amazed by the mountains and almost felt claustrophobic. But the town itself was a one-horse town. Ralph used to say once you come to Fernie you can never leave. I did move to Vancouver for a few years but didn’t like the city life anymore. I guess he was right!
L. I thought, we can stand it here for one
year, and then we have to get out of here.

4. What keeps you in Fernie?
Z. It’s my home, I’ve been here longer than back in the old country. And because of the business and lifestyle.
L. I can’t imagine myself anywhere else.

5. Do you have a favourite Fernie memory?
Z. Probably our wedding up at the Griz Inn, in 1989.
L. Being so involved with building Fernie and getting people here.

6. What is your favourite time of the year in Fernie and why?
Z. I love the fall, it’s usually really nice here with the Indian Summer.
L. Winter, because of skiing. Yes.

7. Where do you see Fernie in 5 to 10 years?
Z. I think Fernie is going to definitely
expand, but it’s always slow growth.
L. Stay as it is. Twenty years ago, people
always said it would be a second Whistler. It
has grown a lot, but it can’t quite get there.

8. How do you start your day or what is one of your daily rituals?
Z. Taking my dog for a walk.
L. Skiing at 9am. That’s my favourite.

9. Tell us something people might be surprised to learn about you.
Z. That I speak another language and am from Europe.
L. I still love Fernie even after 50 years of being here.

10. Quote to live by:
Z. My favourite quote is, “If you’re not making mistakes, you’re not learning anything.” And not a quote, but a statement of intent, “When I grow up, I want to be like Linda Socher.”
L. “Do something active, every day.”